I have written this for many reasons the main reason is because a lot of people, on the forum say they want to work with lucifer but find it difficult, second is because a lot of new comers are attracted to working with him so this is a thread, which will help those a lot.

Lucifers masks - Lucifer has many forms and masks to enter all traditions around the world these are his 11 gnostic forms that were pieced together by Asenath Mason and Bill Duvendack.

Elements associated with Lucifer - His main element is air, but he is also a being of fire so fire is one of his elements to but air is most common. 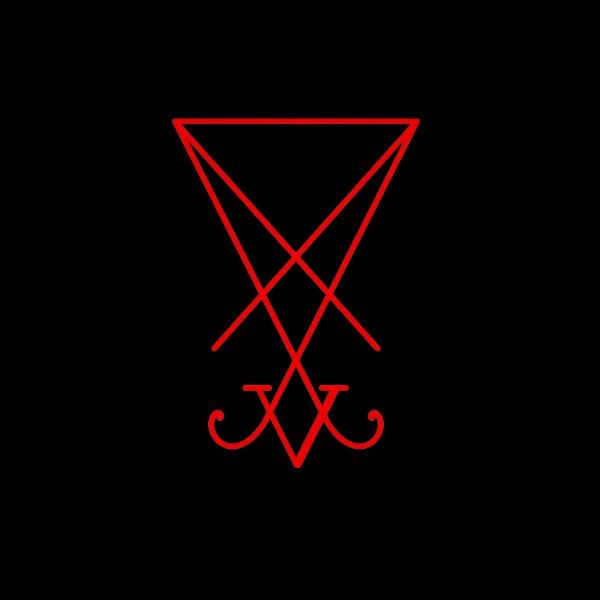 A Powerful invocation of Lucifer - many people here including myself have had amazing results with this.

Lucifer meditation Close your eyes And relax Take a deep breath in and out Feel that each inhalation Lifts you up in the air and energises you And each exhalation Relaxes you but as you exhale Feel the earth spin faster Repeat this Around 10 to 15 times Then visualise your surroundings Become nothing but a empty Dark void. Visualise at each shoulder Lucifers sigil Then each inhale you take Energy flows into these sigil’s And the sigils glow and charge Then visualise your cha…

Litany Of Lucifer - This can be used as a rite of dedication, to change the atmosphere of the room to the luciferian energy, also can be used to summon lucifer to a great level of manifestation.

Planetary Forces associated with Lucifer - Venus and The Sun.

Misconception of Lucifer - I have summoned both, they are not the same being, they actually don’t work well together and are in different realms they are totally separate, the notion that they are the same being is JCI influence, Satan was used to demonize countless of gods from all cultures.

In closing - This should benefit you i hope, this is a help i wish i had the opportunity to have all this in one post but instead it took, research, years of experience and me working with lucifer for many years.

371 Likes
Why work with Lucifer
Beginner trying to evoke lucifer
Worshipping Lucifer
Lucifer
Meditation
Guidance In Asking Lucifer For Help
Pact with Lucifer what to offer him
Why Is The Sigil For Lucifer The Same As Satan?
Lucifer's history?
Lucifer with me?
Little help for beginner
Chants to help evoke Lucifer?
Pact with lucifer I need help
Experienced Magicians Debunk "Selling Your Soul"
Evoking Lucifer
Who is Lucifer to you?
Necessities for evoking
Famous
Saying thanks to Lucifer
Working with Lucifer
Does Lucifer take a respite around this time?
Connected to the bringer of light
Get all your wishes fulfilled only today - Fast!
Emperor Lucifer (The Light Bearer)
The Infernal Saga. ( The True Lore and Myths of Hell )
New to black magick
Dimensional magick
After some opinions please! Re Lucifer
Some questions about Lucifer
Time Folding research Topic - please ignore this journal
"In the name of the Dragon, Lucifer come!"
BALG Forum FAQ By Members, For New & Old Members
Crystals
Now is the time
Looking for guidance
New here...just asked Lucifer for help...any advice?
Looking for a mentor
Catholic here
Catholic here
New to site and lucifer
Help to evoke Lucifer please!
Pact with Lucifer
Lucifer Offering
Help me with Lord Lucifer
Begginer Trying To Evoke Lucifer
Thinking about trying to evoke/invoke Lucifer
Google is overwhelming me with Lucifer sigils
I need someone to help me conjure emperor lucifer
Drawn to Lucifer
I'm not quite sure of my question or how to ask it
Alphamon March 3, 2018, 2:26pm #2

thanks for your awesome thread, i really appreciate it

This is awesome ty. I have evoked him a few times successfully but hit a roadblock invoking him. This helps tremendously ty!

That’s pretty much the exact list I would have made C. Great work! Hail the Light Bringer!

hey, I need to trace some magic circle? and then, to finish an evocation, what to do with secrecy? sorry for my ignorance.

what I do with the sigil after the evocation, destroy or something?

If you are gonna develop a relationship or bond with that spirit then keep the sigil because each time you use it, it’ll become more potent or destroy it in fire for manifesting a goal / desire.

He literally teaches magick in general he taught me how to harness the powers of Darkness, Light and Infernal Fire.

“Shemyaza - The serpent angel, a watcher in the jewish and christianmythology”
I’m glad I read this. Now this explains the snake I saw watching me.
“Janus - The god with two faces the god of time, duality, beginnings, endings, past, future, gateways found in the roman mythology.” I’ve also seen this, and before now, I didn’t understand what it was. It actually made me do a banishment of spirits I never invited. It’s image however didn’t go away. I guess that’s because I’d invited it. I’m looking fwd to learning more on here. Oh my goodness I should have read this thread a long time ago. I realize now I’ve been seeing him all along. “Most common manifestations lucifer takes - Hooded dark figure, A Dark fallen angels, A Bright light Angel, A Jester, A handsome man, A infernal horned demon, A red robe with a goat skull, a serpent, a dragon etc.” I’ve seen the hooded dark figure, the handsome man and a serpent. Mostly serpents and reptiles such as the crocodile.

Lucifer and azazel are the same?

So I just set up a mini alter for Lord Lucifer.

I look after my grandmother so i live with her.
So a Mini alter is what I could manage.
I normally do this in my grandfather’s old work garage but I wanted to do it inside as I wanted to invite Lucifer into my home as a guest and friend.

I lit all candles and sat im the darkness.

gazed at his sigil and it activated quickly. in fact the whole sigil disappeared to leave just the parchment paper. never seen that before.

I asked if he was there, although could not feel anything. or I was trying to hard.

I spoke to him as if he was there. and i said he knew the reason why I was calling him and that if he can fulfill my request or help then i would continue working on this path and asked if he could help me accend and who to call.

I asked him to enter my body to enjoy the glass of wine I poured for him (red wine) then asked if he would stay with me while I went outside to smoke a cigarette so he could enjoy with me. i blew out the four little candles and left the red one (dont know why) funny enough I kind of went and smoked in a trance.

because it’s dark outside I for some reason went to various windows to see if i could scry to him but couldn’t as to many distractions.

I went back in and the sigil was still flashing.

I thanked him for coming and blew the red candle out but staying to breathe in the smoke from it.

any thoughts on this??? 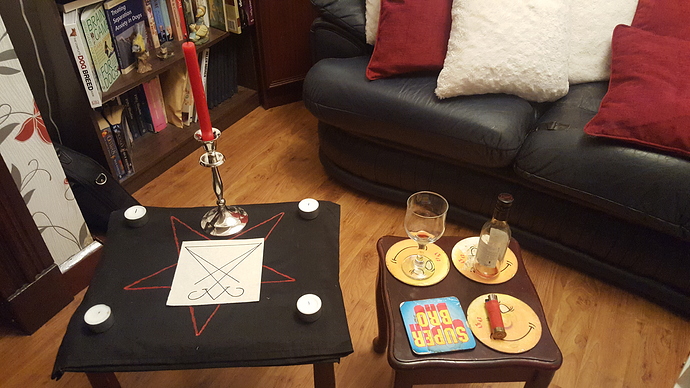 well I am full of energy … or pissed not sure.

Great man glad I could help you Lucifer’s sigil does normally disappear completely for me too.

I suggest performing his Litany as an act of dedication this will also fuel his manifestation.

I tried but need to memories it as it took me out of focus.
I’m gonna do it again tomorrow

do you think he was there?