Sometimes people find his forum because they’re dealing with an urgent situation that nothing else they’ve tried can resolve and magick probably can.
Typically this requires something fast acting but easy to do for people without a lot of magickal experience.

Collected here are some popular posts I’ve noticed getting linked for urgent needs a lot, (and I hope you guys will add more!), that are quick goto methods you can use in a pinch, or good foundation technqies, and generally don’t need much setup or tools and work regardless of your experience level.

You’ll also find all these in the longer all tutorials threads, but when we’re stressed it’s nice to get information quickly.

… have helped many people including myself:

Hey All, I contacted the archangel Raziel, and received some mantras and Words of Power to help out the beginners that come to the forum and don’t know where to begin. These mantras are safe, and have been peer tested by a handful of experienced forum members, but feel free to take a look at my post history if you are wary of my motives for releasing them or about trying them out. I will state here at the beginning, though, that a few of them do produce a highly energetic effect, and so do co…

Have a immediate issue that needs immediate action? This is emergency type magic, this is what you utilize whenever you don’t have time to layout circles or do complex invocations Ori vacations. If the case is that you’re being shot at, I recommend that you don’t bother with this, and that you will either find cover or return fire. This is for giving yourself an edge and upcoming workings, such as emergency summoning of spirits to bring money or to bring favor in a court case because you forg…

Ahl’far’dahn for dire circumstances, from The Book of Azazel by E.A. Koettng 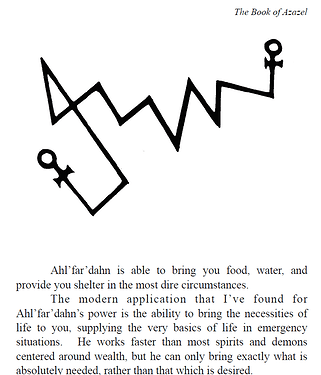 Opfaal The Angel of Deliverance from The Kingdom of Flames by E.A. Koetting 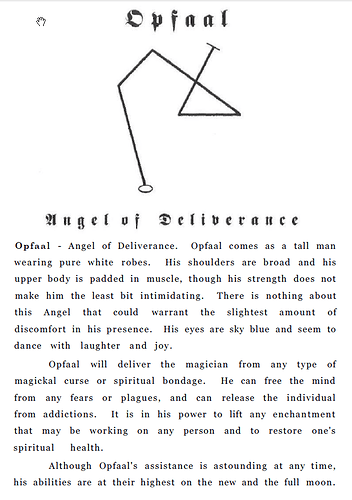 A technique from Freiya Norling who has a yt channel is to trace a rune (or two) on the palm of your hand with a finger wetted on your tongue, with intention aligned with the energy of the rune.
The runes walk us though all stages of life so there’s usually something to help move you though and get you back on your path.

Example: Rune magick using Raido and Laguz just traced on the hand with saliva when you’re stuck in a long line, for getting through queues quickly, is one I tried and it works a treat. Try it when you’re waiting for an answer from someone.
For a good list of Rune meanings check out runesecrets.com.

You can also do this exact same thing using ogham or other meaningful symbols or sigils you find or create. At that point it’s starting to look like “Chaos magick” but it’s the same principle: you find a way to strongly put your will into the universe guided by your intention to manifest change.

Om Aim Hreem Kleem Chamundaye Vichche Namah This is the mantra for Durga, a chief deity in the Hindu pantheon. Its a powerful mantra and can feel overwhelming even frightening at first, this mantra is for combating the effects of offensive black magic. From Wiki "Durga (Hindustani pronunciation: [ˈd̪ʊrɡaː]; Sanskrit: दुर्गा), meaning “the inaccessible” or “the invincible”, is the most popular incarnation of Devi and one of the main forms of the Goddess Shakti in the Hindu pantheon. Durga is t…

How to do an evocation? Instructions:

From my thread: I would like to help the community - give me feedback on what you'd like to read What is evocation: The art of presencing a spirit outside of yourself, in a form which you can either physically or psychically perceive. What types of evocation are there? Grimoire Tradition Evocation which relies on many physical tools and trinket in order to put the magickan in the right state of mind. This method is usually forceful, especially towards demons. This is a method I do not recomm…

Ok, I am going crazy trying to find a way to help my friend. They did a obsession jar that back fired and now needs to be released. I haven’t done any type of Jar yet so I don’t even know where to start with the reversal. Any and all guidance would be amazing!!!

Can’t be seen doing magic? Use your imagination only:

If you need a quick money manifestation,I suggest you too work with St.Expedite using his power mantra.You will start setting up his altar,you need: -one red/white/green candle -printed pic of St.Expedite -glass of water -some coins Put his pic on the center,light a candle on the left side and put the glass of water on the right side (it should look like s triangle : a candle + pic+a glass) you will put coins in the middle where is his pic. State ur wish loud or write on a peace of paper,i…

Ah, brilliant! This lot wasn’t compete without a money spell.