Angels of the 72-Fold Name of God, a Finished Thread

So a bit of background, I’ve not too terribly long ago worked through the 72 of the Ars Goetia, and it went smoothly. I’ve seen some pretty strange results and manifestations as a result of the operation, and I’ve grown as a practitioner as a result of it. But now I’m being guided to work with the angels of the Shemhamphorash. The 72 of the Ars Goetia, as well as a few other spirits that I’ve worked with in the past (namely Archangel Raziel, who guided me to the 72 of the Goetia in the first place) are telling me that the Shem Angels are my next step.

I will be doing a similar setup to what I did with the Goetics, one a day for six days then a day of rest. The main difference is that I won’t be binding them to my will, so much as invoking them and asking them to raise my state of being to a higher level.

I feel like I had to work through the Goetics first as a sort of ‘ground level’ step to prepare the base for this next step in my practice. Like I have the Below and now I need the Above. I’m not saying Demons are below Angels or anything, but the Goetics tend to have a stronger influence in material things, where Angels (at least the Shem Angels) tend to have an influence more aligned with higher things. At least from my experience and insights of divination.

I will be using a physical link as a symbol of the operation similar to the ring in my Goetic operation, but I have yet to determine what that link will be specifically, even if I have a few ideas what it might be.

I will post here whenever I have any updates on this new operation.

17 Likes
That Moment When 5: It's dead Jim
I Finished Binding the 72 of the Ars Goetia!
The Occult Jewelry Thread
Stop treating this forum like Wattpad 🙄
Archangel Adventures, a Pathworking
Angels of the 42-Letter Name, a Pathworking
anon40900405 August 15, 2019, 6:20pm #2

Thanks man. It’s gonna be even more interesting I feel.

Looking forward to it. I still need to complete my own version of the 72 challenge.

I just found a ring on Amazon that felt right, and it has Prime shipping, so I should get it on Saturday, just in time to do the preparatory rites to consecrate the ring so I can start the operation on Sunday.

I will be consecrating the ring when it arrives, so I gotta plan that out while I have time, because once it starts I’m gonna be hitting the ground running.

So I know what I need to consecrate the ring to do, and I’ll probably figure out the ritual exactly five minutes before I do it like always, eh. Glad I don’t have work tomorrow because it would give me more time to plan-out/do the first actual evocation/invocation in this whole thing.

As far as the consecrations, basically balancing opposed forces and facilitating me to realize my ascension. Not raising myself, but making me realize the idea of raising myself is fallacious in itself because I’m already ‘raised’ and need to grasp that truth.

And as far as the actual evocations/invocations, I’m still ironing that out, but I have some idea of what it will be.

I just got the notification that the ring was delivered, so when I get home I’ll be doing the preparatory work and consecrations. I’ll detail what I end up doing and post a picture too. 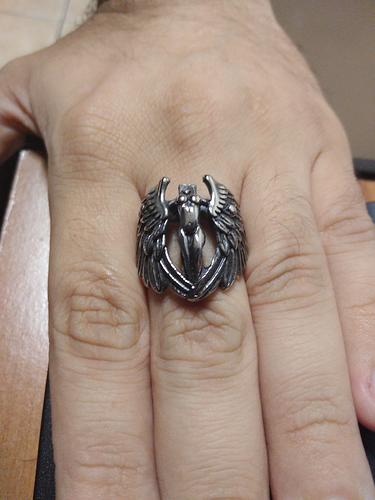 Here’s my setup for the preliminary consecration: 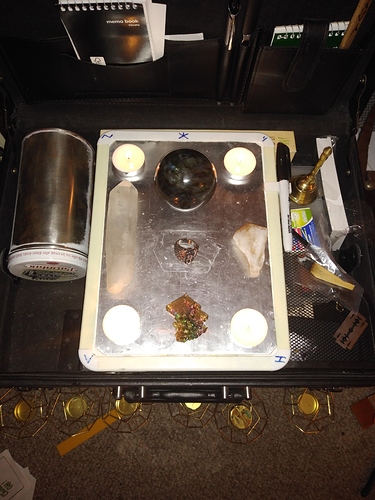 Basically, on the left and right, I got my crystals that are the Sun and Moon, and above and below I have my crystals that are basically Void and Creation. I anointed the ring with solar eclipse water, and declared my consecration. Then I lit the candles in pairs opposing.

I consecrated it to balance opposing forces without nullifying them, and to facilitate the realization of my impetus of ascent.

Currently I’m waiting for the candles to burn out, then I will post a picture of the consecrated ring.

And the ring is consecrated. And now I’m ready to get this operation underway. 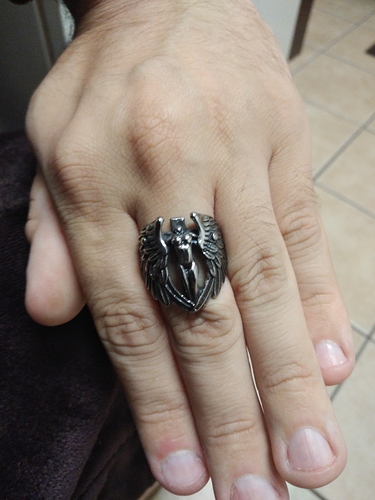 Tomorrow I’ll be calling up the first angel in the list, Vehuiah.

Just did the first invocation, of Vehuiah.

I started by invoking the energies of the corresponding Goetic spirit (in this case Bael) and centered those energies around my heart chakra area. Then I lit the single candle and invoked up Vehuiah, first by name followed by reciting the psalm he is associated with. I called to be filled with his power and then transformed, with the ring being declared a harbinger of my transformation.

After all was said and done, I left the candle to burn as an offering as form of thanks.

I already feel a bit different, but how these changes manifest will be interesting to see.

Here’s the ring after the whole rite. 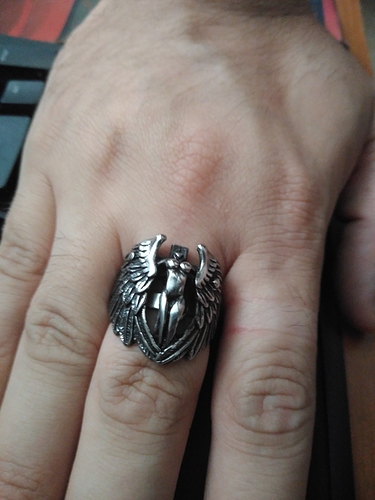 Thats a sexy ring right there.

In any case, as far as the effects of the first invocation, so far it seems I feel taller, and in my minds eye I’m seeing the same things I’m seeing with my physical eyes except from near the ceiling. It’s pretty trippy. I also feel a bit more stable than before.

In any case, today’s invocation won’t be posted until fairly late, since they got me at the one location at work where I have to stay until 9 PM.

Just did the second invocation, Yeliel this time.

As before, I started by invoking the energies of the corresponding Goetic spirit, Agares, before the main invocation.

And as before, I called to be filled with power and transformed.

Already I can feel the changes taking root. I feel like my presence is wider, with further reach than before. I am eager to see what further manifestation occurs from this.

And as before, here’s the ring. 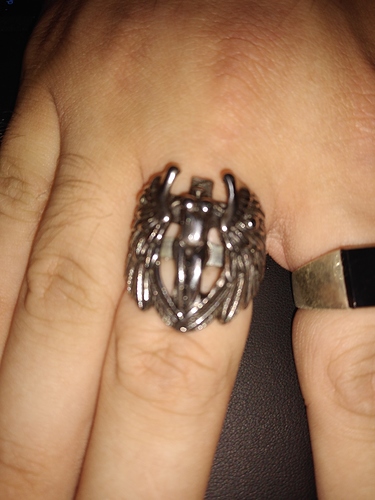 It’s weird, I feel as though the scope of myself has grown, if that makes sense. As I was saying earlier I feel like my presence is wider, with further reach than before, but it’s different than that… kinda.

Well, it is that, but it feels like I’ve grown deeper. I realize that it’s not me actually growing deeper so much as me realizing how deep I actually am. It feels like I have a deeper sense of my power and influence.

The corresponding Goetic spirit was Vassago.

It felt fairly intense, as the last two invocations have. I can’t exactly tell what is different, but I can feel that something has changed. I’ll be doing some meditation after giving it some time to manifest, but I feel like the manifestation will be somehow related to the associated psalm that I used when calling for Sitael.

In any case, here’s the ring again. 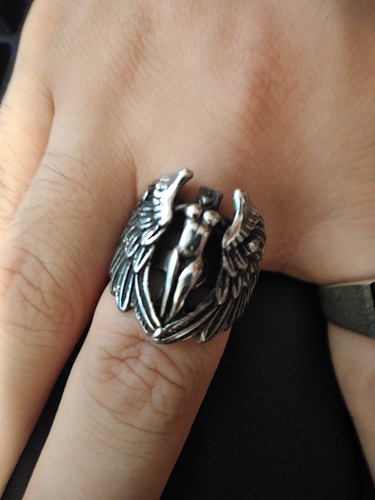 Are you invoking the angels, or evoking them? Are you doing this operation differently from the Goetia operation?

Invoking, and the ritual is different from the Goetic operation I did. Not binding them because it felt like the wrong thing to do.

Where I posted the first invocation, I explained the ritual I’m using for it.