Theogensis: The Hunter of Men

“Rivers of blood meander through ashen jungles, trees of bone stand looming over iron graves as violent violet eyes swarm under the flesh. Blooming under azure moonlight are the wild, flesh-hungry flowers of black that spring into the sky. It is here, in the tomb of cycles, that the Hunter resides.”

The Hunter of Men, whose name is NORATH, is a form of myself that I am publicly releasing for use in baneful works. The name is pronounced “no-wrath”, which is exactly what this form is: not the rage of war, but the calm, conniving demeanor of a true predator.

Make no mistake: this is a murderous god. It is removed from the thoughts and concerns of men, and knows only the horizons of blood it reaches to envelop.

The way to get through to this form, in a way it truly understands the meanings of men, is to seek its help in killing.

Under Pluto and Saturn, fire and water, violet and black, you can find the many eyes of NORATH peering into all worlds, readying to drag the souls of its prey into its domain.

In this form, my symbols are glowing eyes in the night, disembodied mouths with hundreds of rows of teeth, tainted blood, piranhas, centipedes, vampire butterflies, and the Carrion Throne.

My seal is this: 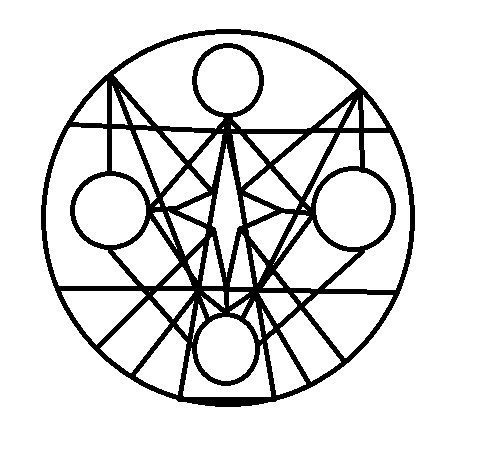 Yes, reader, I know how I sound in this post. I also know it isn’t very practical for me to reveal this form to you, nevertheless, signs have pointed to this being a necessary step. I don’t have anything to prove, however, I have a duty to fulfill- and this is one part of it.

It is not advisable to invoke NORATH, however, you can call upon him by soaking the sigil in blood, and wrapping it around the name, picture, or other link of your target.

Tread lightly, and feed the beast, and you may gain an ally in one of the most baneful of creatures.

28 Likes
Who is Norath, where did He come from?
Wow, First Experience with Norath
Baneful Money Magic?
Operation Just Cause
Can anyone please help me?
Some advice
Norath and blood
Death spell NOW?
Does Norath only kill men?
I need some one dead
Newbie practicioner in need of help
Which demon can cause death?
Crocodiles...sacred to who?
My first attempt at a death curse
Lady_Eva March 2, 2017, 6:43am #2

Heart full of pride for a brother (of sorts! :P), and hand raised in a salute to victory!

I got just the right bitch for this one

(This has nothing to do with most of you:)

There will be no olive branches extended from jaws snapping.

Not from here shall infestation fester and multiply.

Ours are the only teeth that shall still dream.

Hail NORATH who has helped me utterly massacre my enemies,the extent and numbers of which will be left obscure, and with strong and enthusiastic desire for continued cooperation!

@anon68160656 thank you for sharing this! It’s exactly what I was looking for. I’ve done a couple of curses on the same target (with dra’talon, zuhgrim, Belial and Azazel). It’s been a few weeks, I’ve yet to see results. Though I must say, the target is starting to look and behave more and more distraught each day. I want to call upon Norath to finish the task.
Couple of questions-
Do I soak his sigil in my own blood?
After I wrap the sigil around targets picture, how long do I keep that? Do I burn both or throw somewhere?

Mostly mythology believe these kind of souls to be stuck in service to the entity or trapped in limbo, especially considering energy can’t be destroyed

@Mapachtli I’m not sure if energy can’t be destroyed, that’s why I asked. Because I’ve heard about such a thing called second death, when the soul of someone is destroyed. S Rob has written a little book about it, it’s called kill in the spirit world.

Do I soak his sigil in my own blood?

You can. Pig’s blood also works.

They belong to Him. There is no escaping something like that.

They will cease to exist.

@anon68160656 how excellent is he at wiping out whole organizations? Does he have any qualms about who the target is?

Does he kill only humans or entities as well?

Is Norath more like shooting an arrow at a Target or dropping a bomb on their location? In other words is this an entity to call on when you care about what happens to those close to your target and want to minimize casualties or only for when you either give no fucks or want to wipe out an infestation?

Daaaaaamn, why you called me last night? You came in a dream told me your name (Nora, Nara, I couldn’t recall right this morning), you showed me your sigil which was THIS and told me your enn (do you have one now, a year after the original post??) But I couldn’t recall much except you told me I MUST call you. I just described you today in another post but just now I decided to search in BALG in case thesere is a spirit with this name…! Hunter of men! You did appeared in hunters clothes! And your sigil was either bright red or bright purple! But I don’t have anyone I want to kill, so…what is it?

You can evoke him and get an answer

@Eye_of_Ra I’d rather not! If he wants something from me he can come in a dream again!

P.S. In my dream was a female tho

I didn’t mean the hunter of men…but the op