Heinrich Cornelius Agrippa was a German Polymath and Occult writer during the late Fifteenth and early Sixteenth Century. He is most well known for his texted titled “The Three Books Concerning Occult Philosophy”, which was completed in 1533 under the intention of mixing Neoplatoism, other folk traditions during his time period, Hermetics, Judaism and the natural sciences of the time to combat growing skepticism towards his faith. The text is about as thick as the Bible itself and filled with many different ideas that one can draw from for experimentation. One of those subjects is the Kameas.

Kameas are magic squares created by Agrippa that he used to basically symbolize the seven classical planets (the Sun, the Moon, Mercury, Venus, Mars, Jupiter, and Saturn) in order for the individual to tap into the spirits and intelligents of each. Each square is comprised of the same number of columns and rows, with each adding up to the same total sum. Alone these squares represent the raw power of each planet. Seals are then created by connecting each number in the least amount of distance and are used on top of the squares to limit the magic behind each one, which can be useful when not in use or when you need a softer form of the planet’s power.

While the squares alone are very useful, their main use is to create sigils for specific spirits under the influence of each planet. Under Appriga’s system, this would be done by writing their name in Hebrew and following the traditional translations of letters to numbers (unlike how many societies have a separate writing system for letters and numbers, Hebrew letters also served as a marker for numbers in the case of records of trade, calendar dates, etc). Then you draw lines between each number within the square that spirit is ruled under occurring to Agrippa.

While I do love studying other languages, I do find this system to be impractical for others due to its complexity. Complex does not always mean more powerful after all. So, I experimented with basic numerology and have found it to be very efficient for sigil making. For example, let’s say I wanted to make a sigil for Sorath. The first step is to identify the planet I can associate him with most. Without getting into too much detail, I am going with the Sun. Here is the Kamea for the Sun: 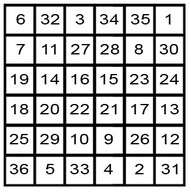 Next, we write out Sorath’s name and drop all the vowels, leaving us with S R T H. If you have the same letter repeating itself, you can drop the extras as well, as we want each letter represented only once. We then want to assign each letter a number value. This can be done following this chart:

This gives us the following values:

Finally, find each number within the square in order of how the letter appeared in the name and draw lines connecting each with the least amount of distance possible. If you find one number is not within the square, skip it. This is an imperfect method but I have found it does not hinder the sigil’s strength. You can then choose to keep the sigil on the square or freehand draw it onto another piece of paper. Feel free to jazz it up as you feel inclined to with circles, arrows, etc. I personally prefer to draw a small vertical line at the start of the sigil to mark the beginning and a small circle at the end to signal its termination.

At the end of all this, you have a sigil that you have already infused your own energy into it to help with activation. It can be used for a multitude of different things as well, such as creating servitors for tasks ruled under specific planets, to heal or harm targets, and for the creation of talismans. So feel free to experiment with this and see where it takes you.

Thank you for taking the time to read this, I hope this was enjoyable and helpful.

A link for the other Kameas I tend to use often if the book is not on hand:

This is so cool and the information is broken down so well. Thank you for taking the time to write it up. I will re-read after I have had coffee, but its done a lot to de-mystify magic squares!