It is a bit of a understatement to say that these are troubling times for many people. We are dealing with a pandemic, shut downs, economical hardships, and fear just radiating off of others. It is easy to get lost in the despair, whether it is coming from the pandemic itself or the fear of lack of control. This devours the mind and can have a very strong influence of our manifestations in our physical lives if we bend the knee to it. Like many of us, I am the leader of my family and I cannot afford to fall into that trap. So I designed this ritual.

Before we get into the actual ritual, we need to go deeper into the title of “king”. Terms such as King/Queen, Emperor, Living God, etc are pointless if they are not understood. For this, I will look over a broad list of qualities that have been represented in various civilizations throughout history. Kings serve as a central point of society. These are the people others look to for guidance and are responsible for the growth of a group with the balance of firmness and productive support. Kings are the ones who make decisions when everyone else is panicking and provide guidance for others when all seems lost. They build bridges and look at all parts of a given issue to make decisions, whether it is calm negotiation or to bring out the aggression to defend their kingdom. Ranging from the Egyptians with their pharoahs to the Celtic kings, rulers were the connection between the land and the divine to the point where their physical health (and fertility) were believed to have a direct effect to the conditions of the earth.

By taking on the role of king in your life, you are accepting the responsibility of how your life plays out through your decisions as well as possibly being the person others come to for guidance. This can only be done by developing a sense of center and confidence in yourself to make the best possible decision you can, even if you are not sure what the outcome will be. It cannot take root with the fear of failure, as you will descend into the King’s shadows, which are the tyrant (where you are overly aggressive to try to make up for your sense of self lack, especially from external validation) or the weakling (where you are too crippled by the fear of failure to make a decision). To achieve this, I turned to three gatekeepers who have challenged my leadership skills the most: Belial, Baal, and Beelzebub.

You will need:
3 candles (color does not matter. I used two red and a black candle)
Incense (I used loose so censer and charcoal disk would be a must in that case)
Sigils of each demon (can be done on flash cards)
Push pins to pin sigils on the wall
Black string
The Sun Magic Square
Diabetic lancets
A drink offering of some form, I used beer
A piece of paper with your fears written out, especially if they relate to your sense of control with your life.
A fireproof bowl with matches or lighter

Place a table against a wall if you do not already have a working space. Place a chair for you to sit during the ritual, much like a king sitting on their throne. Draw out each sigil for Belial, Beelzebub and Baal if you have not done so already. Take your time and proceed to activate them by your usual method. Pin them on the wall to form a triangle however it feels right (for me, Belial was in the right corner, Beelzebub on the left and Baal on the top). Take your string and connect the sigils, forming a triangle.

Draw out the magic square (or Kamea) of the Sun. On the square, draw out a sigil made from your full name. Activate by your usual method. I have covered how to do this on a previous tutorial which can be found here:

Heinrich Cornelius Agrippa was a German Polymath and Occult writer during the late Fifteenth and early Sixteenth Century. He is most well known for his texted titled “The Three Books Concerning Occult Philosophy”, which was completed in 1533 under the intention of mixing Neoplatoism, other folk traditions during his time period, Hermetics, Judaism and the natural sciences of the time to combat growing skepticism towards his faith. The text is about as thick as the Bible itself and filled with ma…

Place this square in the center of the triangle. On the table, arrange the the candles to form another triangle and put your censer/incense burner in the center. Place the drink, list of fears, bowl and matches nearby for use.

Here is a picture of the set up so you get an idea. Pardon the Asmodeus sigil, as I keep it there for all of my workings as he has became an invaluable advisor/patron to me. The stone is a vessel for Beelzebub and is not part of the actual set up 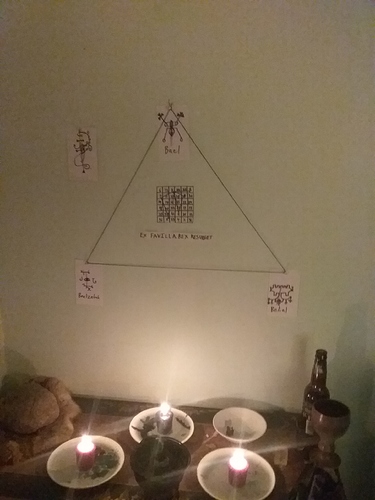 Before beginning, take some time to mediate on what it means to be a king, where you have succeed in regards to playing that role in your life, where you have fallen short, etc. If you are using loose incense, this would be a great way to spend the time waiting for the white ash to cover the disk. When you are ready, clap your hands and declare the ritual to begin.

Starting with Belial, begin to chant the enn or name of these three beings, summoning them into your space. Take your time and do not stop until you are sure they are there. They responded well when I commanded them to arise, as you are reclaiming your power in this rite. Trust your gut with this. When you have called all three, begin with:

“I stand before you great kings, those who broke the chains of former rulers in order to declare their own, to rise as an equal. I have been afraid, I have made excuses, and I’ve held onto things I should not have. All of these have limited my power, and those days are over as of today. That person dies here and now.”

Take out the list of fears and begin to read them aloud. Make sure you really feel the weight each of these fears hold over you as you do. Fold the paper and set the corner on fire, declaring “I give you all the energy I spent with these illusions my mind turn into a prison.” Drop the paper into the bowl.

Turn your focus as you sit in the chair, start to mediate and visualize that you are standing on the square of the sun with each of these spirits standing in a triangle around you. Watch their power flow to form the lines of the triangle, mixing and intensifying. Direct the power from the lines towards the square and sigil beneath you and watch it ablaze with power, drawing the energy up your body starting from your feet to the top of your head. Allow the power to flow until you are at your limit, knowing that you are and will always be king from that moment on.

Allow yourself back to the surface and allow yourself to feel like a king on his throne for a moment before arising. Take the drink and hold it before the sigils, saying something along the lines of

“I sacrifice my fear of failure in exchange for courage.
I surrender my desire to ignore problems in exchange for decisiveness.
I leave behind excuses in exchange for the strength to act and be wise.
In the presence of Belial, Beelzebub and Baal,
I make this oath.
Ex favilla, rex resurgent.”

Drink deeply and proceed to ask for advice from each if you wish as your proceed with usual dismissal. Declare the gates of blood, smoke, and fire closed one by one, putting out the candles. Clap your hands and declare the ritual over. It is done.

If you want to have a piece of jewelry to remind you of this rite, just place on the working space prior to starting the ritual and declare it as such before the gatekeepers before dismissal. You can also keep the ritual wall up as long as you wish to be a place to mediate on to further connect with this sense of kingship, especially when you feel overburdened. I hope you have found this to be enjoyable and something of interest. Thank you.

Love it! How did you feel afterwards?

Damn, I knew I forgot to include something lol. I am actually very calm and clear headed. Yes, i still have concerns (as we all do) but they are not an overwhelming weight to where I feel like I cannot do anything. If anything, my decision making skills seem sharper and with more confidence behind them, which is part of the whole point. I will say that i was exhausted right after casting though and fell asleep for a few hours afterwards

At first I was not sure I needed this, but it’s got a great energy and it feels like those already the monarch in their domain would benefit as much as those that could do with a bit more sovereignty. I’m looking forward to trying it.

Awesome, please let me know how it goes

What’s loose incense and can any other be used like dragons blood?

Loose incense is essentially raw fragrant plant material that has not been processed into cones, pellets, or sticks. Basically it is raw resins, spices and herbs that have to be burned on a charcoal disk.

You can use any you have on hand really. Dragon’s blood would likely go well as it amphlifies magic in general based in my experience.

When I performed this, I used frankincense, myrrh, and Benzoin, as I had them on hand.