Guess i could need a hand

So after i looked at alot of Sites and Forums on the Internet now, i decided to try and ask you guys for help.

My Problem is that it seems like for some reason somebody sended me an Incubus to humilate, blame and rape me whenever he can.

It all started almost two Months ago after my Ex-bf broke up with me, i was really sad and kind of depressed when i met a (i would guess mid 50) women on the Train station at my City wich i havnt seen before in my life.

She came up to me and told me that i dont have to be so sad n stuff because he already got what he deserved and ill be happy soon …you need to understand that i didnt know this women in any way so i yelled at her that she should leave me alone and blamed her infront of many people…she was REALLY REALLY pissed and told me that i will regret how i talked to her after what she did for me ( NO IDEA !!!) …2 days later a friend of mine told me that my ex went to hospital after a car accident…

2 weeks Later THe …i call it nightmare… started when i lay in my bed n watching tv when all of i sudden i felt like a hand was grabbing my tigh, it felt like someone is tryin to press them aside but it stopped after just like 1 second … i thought i was fallen asleep for a moment and it was lieka weired kind of dream or so

the morning after i felt really dizzy as if i just slept for 5 minutes the whole night with massiv headache.

i took a few minutes till it was going slower… while IT was doing it my whole lower body was icecold but in the moment he stopped it felt like its getting hot and warm between my legs and i had an intense orgasm without knowing why.

I’m really sorry to hear all of that, no one should be subjected to that sort of thing without consent.
With that said, from what I know about Incubi and Succubi I’ve heard they’re incredibly difficult to get rid of. From what I know about them the only way to get one to leave you alone is to try your best to completely ignore it, which I know sounds impossible. With that said, I think there may be others here who may have more knowledge on the subject than I do.

You also might be able to invoke Lilith and ask her to take it back but I don’t know if this would work or make things worse.

Does anyone else know about getting rid of incubi/succubi?

First of all , thanks for ur answer

i cant imagine a way to ignore this at all

A few questions, what do you know of banishing and cleansing and shielding yourself energetically?

Try this: visualize like water spouting out of the top of your head, coming down over the out side of your body (not touching you), spiraling, then come back up into your heels of your feet. then see a white bubble of light form with the water leaving no gaps anywhere, it completely surrounding you like a capsule. then visualize a white ball of light, warm, inside your heart, then visualize it spreading slowly within the capsule, cutting all malicious attachments and tethers to you, see it expand and fill the entire capsule, then visualize it burst with brilliant light out of the capsule and into the air surrounding you

i cant imagine a way to ignore this at all

I know. That’s why I hated to have to even give that answer. From what I know they don’t respond to any kind of RHP exorcisms such as “leaving in the name of Jesus” etc… etc… but I know there’s someone here who probably knows more about removing these entities than I do as this place is a wealth of information.

Try looking up lbrp on here or any banishing technique. Boot him out of your room and place salt on your windows and doorways.
Also try a limpia and take a picture of the egg after it sits in water for 15 seconds.

A limpia is a cleansing ritual that cleanses of negativity, sickness, and curses. The following is a very simple version utilizing an egg. There are more complex versions with accompanying rites to dispel stronger shit, but those are better taught in person for it to be done correctly. Anyhow, some of ya will probably find this useful when you got someone giving you the mal de ojo (evil eye) or if you have a coldor something. Take a raw, unused egg. Completely virgin. Wash it in a bowl of holy…


I’m going to looks up a few shielding guides, he doesnt like you shielding because it keeps you safe. You need a strong shield and to learn to boot him out and keep him out.
1 Like
IviodaI October 19, 2020, 8:17pm #11

This needs practice. Do it again and again, it will get stronger. Every harmful energy has to leave this bubble, and cannot reenter.

Aura I have been an occultist for years and my Path is calling me to be the Fool again. So relearning and expanding myself this time I know what personally works for me. Simple and basic is the best foundation for energy work. The first thing is to shield yourself and energy. **_ An aura is a quality or feeling that seems to surround a person or place or to come from them. _** [f4257059667117b08cb9b5221992549d] ·Now, imagine a ball of pure white surrounding your body. ·The mirror techni…

So didn’t find an individual topic with this kind of list so gonna use it for compiling some things new people can jump right into that kinda gets overlooked. Mainly RELYING ON ONES OWN POWER FIRST

First learn some basics practices for devlopment. Most systems with any real value have some type of foundational exercises in them. Here are 2 posts that make for a good starting point that lead into alot of other work. This second one covers alot of subjects and is definetly worth a re…

Here some beginner friendly guides to shielding and banishing.

So, I’m shooting ideas off here but I got to thinking that perhaps a more powerful demon or angel may be able to get rid of something like this. You may want to try invoking either St. Michael or Lucifer.

You have no magical experience, so try this:

It was specifically channelled to be as easy as possible to use for beginners.

I don’t think my message sent in PM so I’ll send it here. Try this aswell:

Get some salt and hold it in your hand while doing this. 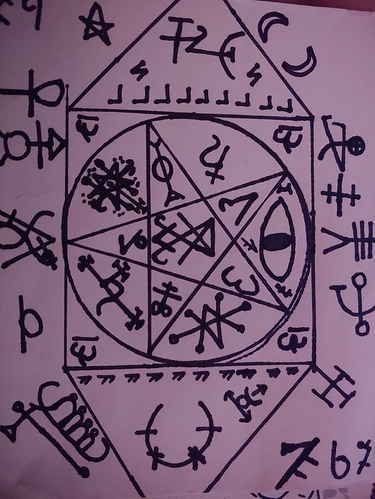 Gaze at the eye as you would a lover, then say to yourself and outloud: “Renich Tasa Uberaca Biasa Icar Lucifer, Tasa Alora Foren Astaroth, Eya on ca Azazel aken, Renich viasa avage lillith lirach. Come to me and help me, I do not will, want, nor desire this entity to be attached to me. I ask that you cut it’s attachments to me!”

Then visualize the capsule again, this time visualize that sigil in all directions on the capsule, then see a black and gold pyramid with an eye on all faces rise from the center of the capsule, then rise above you and the capsule. Then see it explode with brilliant black and gold flames that surround you and the area around you. Visualize red tendrils that are attached to you disolve and burn in these brilliant flames, while it’s burning affirm to yourself and out loud that you do not want this entity attached to you. Once it is gone say thanks to Lucifer, Astaroth, Azazel, and Lillith! I’ll cover any offerings or energy that is needed for this.

It all started almost two Months ago after my Ex-bf broke up with me, i was really sad and kind of depressed when i met a (i would guess mid 50) women on the Train station at my City wich i havnt seen before in my life.

She came up to me and told me that i dont have to be so sad n stuff because he already got what he deserved and ill be happy soon …you need to understand that i didnt know this women in any way so i yelled at her that she should leave me alone and blamed her infront of many people…she was REALLY REALLY pissed and told me that i will regret how i talked to her after what she did for me ( NO IDEA !!!) …2 days later a friend of mine told me that my ex went to hospital after a car accident…

I want to know more about the encounter with this woman. Are you implying here that she knew about your ex breaking up with you without you telling her? Or were you standing at the station sad/crying, she approaches you and tries to make you feel better, and you lash out at her attempt to make you happy? You also say that you blamed her. What did you blame her for exactly? It sounds like you hired some woman to help you deal with your ex, and maybe it didn’t go as you wanted…and so you lashed back and offended her. Its just odd for her to say that you, " will regret how i talked to her after what she did for me " …unless the implication here is that she’s been spying on your life, and she did some magick to separate you from your ex. Was your ex abusive in any way? We need more information in general about how this interaction played out…because the implication here is that this random woman cast magick on you.

And one more thing. What made you assume that this was magick done on you and not some mental condition? Before you had this interaction with this woman, what was your views on magick, spells and spirits?

This seems like one of the most likely things to work.

You should’ve chilled with the grandma. But damage is already done. Chances are she is a witch and has sent an entity to you. Banishing and stuff won’t help at the moment because you don’t have much fire power.

You need to seek an entity to work with. Try calling asmodeus. When you get better make sure you cast a death spell on the ducking old woman. That’s unforgivable