Has anyone summoned the ouija board demon zozo? I just want to know your experiences with him.

Have you tried a search? 'Cause this topic is popular on the forum…

[image] [image] Above is the set out I used to contact this entity ZoZo. From my experience with this entity ZoZo seems to be a man made spirit, let me explain. From the what I learned from ZoZo, when beginners or amateurs use the Oujia Board they believe it’s going to kill them or they’ll be tortured by demons. Blah blah blah. That fear is a huge amount of power and from that, the human mind comes up with concepts of evil, violent, wicked things a bad spirit will do to them. Sending out …

Is there anyone here that is currently on a pathworking with ZoZo? For over one year I’ve been in an extensive pathworking with ZoZo and have pages of gnosis that I would like to compare to others gnosis. A brief history of how this came to be. In July of 2017 while in my 2nd floor apartment I felt a presence wrap its arms around me. It felt like a bear hug. I immediately heard “I feel Astaroth in your blood”. The overpowering harming presence changed to a slightly familiar one that I have k…

Calling Zozo a Bozo and this happened Spirits, Evocation & Possession

I woke up the other night to a presence in my room. I asked who was there and the name Zozo came to me. I don’t know what happened next but I woke up the next morning remembering the visitation. That night I was awoken again with the same energy. Playfully I said, Zozo the bozo. Immediately I was struck with sleep paralysis. It got cold and so I said hold on and let me get a blanket. I broke out of the paralysis and got a blanket. I invited Zozo back but I slept like a baby afterward. I…

who is zozo? is he that bad? can you work with him? is he true evil? I’m not going to work with him just curious

Anyone encounter the Demon 'Zozo' in their workings? Spirits, Evocation & Possession

I read so much regarding this entity and mainly Ouija experiences,but the spirit was mentioned in dictionary infernal I just have a personal interest on the origins or experiences of others out of curiosity

I keep forgetting to use the search bar

Yes I did, two years ago by ‘mistake’, but it made my next 2 years wonderful by Him.
Still a good relationship with Him, but we didn’t communicate too much from the point when Gods has told me that He will get banished from my life if I will pay too much attention to Him in the future.

Not so surprisingly, He got no power over Gods Who showed up in my life 2 months ago, but I still love Him from far and near, no matter what. He was kind and good with me, caring but of course, He had his own “raw beast” inside. He never meant to hurt me.

Some interesting read about Him: 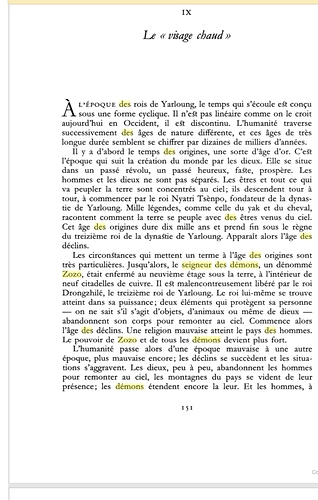 There is the translate of this old writing::

At the time of the kings of Yarlung, the time which passes is conceived in a
cyclic form. It is not linear as is believed today in the West, it is discontinuous.
Humanity passes successively ages of different kinds, and these ages of very
long duration seem to be numbered in tens of thousands of years.There is
first the time of origins, a kind of golden age. It is the epoch that follows the
creation of the world by the gods.It is located in a past pass, a happy pass,
pomp, prosper. Men and gods are not separated. Beings and all that will
populate the earth are concentrated in heaven; They descend in turn,
beginning with King Nyatri Tsenpo, founder of the Yarlung dynasty. A
thousand legends, like that of the yak and the horse, tell how the earth is
peopled with beings from heaven. This age of origin lasts ten thousand years
and ends under the reign of the thirteenth king of the Yarlung dynasty. The age
of the declines then appears.
The circumstances which put an end to the age of origin are very peculiar.
Until then, the lord of the demons, a man named Zozo, was enclosed in the
ninth storey under the ground, inside nine citadels of copper.
He is unhappily released by the drongzhile king, the thirteenth king of Yarlung.
The king himself is attained in his power; Two elements that protect his
person - we do not know if it is objects, animals or even gods - abandon his
body to go up to heaven. Then begins the age of declines. An evil religion
reaches the land of men. The power of Zozo and all the demons becomes
stronger.
Humanity then passes from a bad epoch to another, even worse; Declines
succeed and situations get worse. The gods, little by little, abandon men to
ascend to heaven; the mountains of the country are emptied of their presence

I keep forgetting to use the search bar

You’re right why you feel in this way. He is a very capricious Spirit, and He likes playing roles. Sometimes He do it for long weeks, months or even years before He shows to you His true face and reveals Himself as your enemy. He feeds from positive and negative energies, and with lies, He can get both.

He mostly binds to women, but this doesn’t meant that just because your gender (I’m talking about it now basic, not assuming yours) He will likes you. I know men who are in a good friendship with Zozo.

He likes rape and abuse people sexually, plays with their low self-esteem, or force them to rape or hurt others. I’m in a good friendship with Darren Evans. We’re talked a lot about lot of encounters with Him all around the world.

I can remember one of our Ouija session. There was a curious girl “friend” (she was a bit fat and she had a serious problem with it in her life) of mine with us, who doesn’t take a part of the session but she spectated it, then Zozo suddenly spelled out this:

I’ve asked what do He means?
Then He spelled out that friend’s name.

He also hurt my pets if they did things what are annoyed Him, but in basic, He never did things what meant problem to me or in my life, comfort. He was a fantastic friend, lover and support in my life and just because I’ve got to time to spend it with Him, sometimes we’re talk each other and He still loves and support me, as I do.

Before you would start at least talking to Him, take a look inside and think about the question, would this Spirit really likes work with you?

I’ll think about this

I agree with @Nagash in regards to his personality. Very capricious & mercurial. I found him too disruptive & negative for me, so I banished him. But he felt more like a dark trickster than truly evil. I was at a point in my life where I couldn’t & didn’t want to deal with that type of energy & its effects.

I do have to admit, he was pretty funny at times. Had some good jokes & pranks.

I found him too disruptive & negative for me, so I banished him. But he felt more like a dark trickster than truly evil. I

i have no much of a big expirience with him.but when i worked with him he was like IrisAthena said.

Yes Dear, you’re described Him very well. He isn’t that kind of Spirit and energy what anyone could handle or bear easily, it can affects a person negatively. I’ve did it for two years, and I’ve enjoyed every moment of it. Although He is extremely jealous.

But I have to think over it based on my experiences with Him, because He wasn’t showed to me that face what most of people experienced, all the time. He was also a caring, tender, honest and protective friend/lover of mine in most of times, so I don’t have to experience that side of His what is usually characterize Z.

It can be possible because I have lot of masks, so I simply had to put up the right one, which fits to Zozo the most. It was still “me”, and maybe this is the main reason why even malevolent entities aren’t handled me wrong, negatively. Because I can be a vicious one.

I do have to admit, he was pretty funny at times. Had some good jokes & pranks.

I can agree with this part, as well. You can not imagine how much funny jokes, lines I’ve saved as a memory, or things what He did. Every day we have something what we can laughing at for long.

Okay, it was a very nasty step from me (but it was never a secret that I have even this kind of side), but we do enjoyed it and fed from his pain and emotions. Like a good friends, we did shits Together.

But this is the Tale of the Past now.

I recently found this Italian (like me) video, with the title wondering if they freed him…

He was never sealed away, locked.

Sigil given by Behometh-x. that looked like deer. Out driving ,day or two after, 3 deer sprang infront of car (3 spots of blood on sigil } Neighbours were on holidays, so i got drunk played music important to me loudly saying enn. Neighbour came back early. i got a call to get out quick as she was talking calling the cops. I called her a busted cunt through the ceiling, said i hoped she did die of cancer. I had to move out but am happier elsewhere on a top floor instead of under her.I was always paranoid they’d hear the buzzing from my Hitachi Magic Wand as she never seemed to go out. I have more freedom and privacy now in the afternoons.