The Mask Of The Devil's Star - Gateway Into Azazelian Quintessence

The Mask Of The Devil’s Star - Gateway Into Azazelian Quintessence.

I evoked one night to physical manifestion, I had received his sword. Awakened within me the nether core of his disciple Ant’harratu.

However he still had another gift to give me, there in the incense smoke Azazel’s Ebon Black Ram Horned Satyr appearance gazed at me.
He shifted his appearance into a living symbol it shined with a dark blue light, as if a dark blue star shined it’s way through the horizon of outter darkness.

Azazel told me this sign was a gift and that one of my fellow brothers of the cloth, would known the nature of this symbol.

I was going to just simply open it and glean all the infernal wisdom from the symbol itself.
Azazel however didn’t want that, he told me to seek out Kurtis Joseph. Some of you may known this man from Drakonium Arkanum, his contributions to BALGS gatekeeper series.
As well as Kurtis’s great work Black Magick Of Ahriman.

Azazel wanted me to seek him out as if the symbol had not only a message for me but also for Kurtis and it would take both of us.
To decipher the full potential and usage of this infernal gift.

So I got in touch with Kurtis, I simply explained the situation and that Azazel urged me to contact him to decipher the symbol and I asked him if he’d take a look at it before I open it.

He agreed and went to work prying his three eyes into this interesting symbol.
After about 30 to 40 minutes Kurtis messaged me back with a simple sentence.

“The Mask Of The Devil’s Star” I immediately felt a surge up my spine to my third eye as if a epiphany had struck me like a bolt of lightning.

Kurtis went on to explain that the energies are much more primal than many would classify with Azazel. I knew he was right as when that symbol was materialised in astral form the shift in Azazel’s energy was apparent.

Kurtis had this to say.

“Through this gate is found the wisdom of the first God, the first Sun who fell after being elevated to rule successfully over the Golden Age of Luciferian perfection. The first Sun cannot be seen without the vision of the star and knowledge of those who dwell there, for they are liminal points of Drakonian Consciousness leading to the fullness of my Saturnian glory. No man knows my raw power beyond the tales writ by the finite minds of men. The Grimoire of the Forbidden Brothers was just the start of the Apocalyptic Revelation of my power leading to the book of life through the ONE Tree of Drakonian Power.”

The star is like a ‘Ajna Chakra’ of the planet Saturn not yet seen or known by man.
It isn’t visible due too the illumination of the black light.

So I thanked Kurtis and understood that Azazel was using this situation to unite me and Kurtis in this working which leads to something me and him had been speaking on for a while. Anyway I digress, I knew it was time for me to get shit done.

I Open The Rift.

I opted for a simple set up. 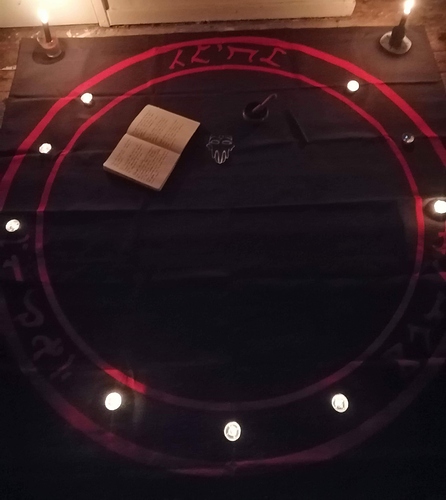 As well as ‘The Mask Of The Devil’s Star’ upon the circle. I struck the bowl vibrations began adjusting the energy internally and externally.
Once energy was raised and my mind had dropped through the incessant astral winds around me.

I gazed upon the symbol, I began reciting
‘Itz Rel Itz Rel Azazel’ over and over.
The symbol opened the rift was too opened and my consciousness had projected through the invisible connection between and the gate.

After maintaining balance through the onslaught of alchemical merging of my consciousness and Azazels. I could see Saturn through Azazel’s eyes, his voice which had also become mine and mine become his, spoke.

"You think you see, you do not.
Through the iris of the saturnian stellar labyrinth, I shall unveil the illumination of sight.

Amongst the roots, you’re serpentine mind shall sliver. Breaking through the cracks of illusion.
The self shall bathe in the abysmal waters of the nightside.

Once one has become infected by the kliffothic hosts, the golden ray of man’s destiny shall shine once again.

As you rise beyond the throne of celestial glory, as the light within the light.
You shall drink from the golden goblet of the Sephiroth. Devouring, consuming the heavens.

As you descend through the column of the black light, you shall feast upon the forbidden fruit hanging amongst the infernal vines.

Walk between the trees to the primordial tomb, sit upon the throne. Drink from the elixir and partake of the fruit. Unlock the secrets of knowledge, power and immortality.

The signs of thee apocalypse have been revealed. The rings of ice and fire, the ferocious storms of Saturn forming the cube.

All are my signs, the dragon shall awaken."

After these words were spoken I was immediately dissolved and re-materialised upon Azazels throne as the Ebon Satyr himself.

My eyes looked out into the burning saturnian violet skies, I saw through aeons of memory.
I had became Azazel, there I saw my various forms. I appeared to women of the craft as the charming Satyr of the wild, a lord of transgression.

I appeared to the desert Magus as Al’uzza the great goddess. I appeared to men and women as a glorious Angel holding tools and devices of science and Magick.

Giving unto them the secrets they were on the brink of learning themselves, I saw my birth, my death and resurrection. I was a Titan, Angel, Goddess, Man, Woman, Lord Of The Wild.

Now with my new eyes, I could see that which even the most adept seers could not.
The flowing current of the lake of fire, which is beneath every plane and realm of existence.

I even caught the divine vision of the womb of the dragon. The rest of the experience I must keep concealed to myself, by the powers of Satariel. However use this powerful tool, have you just started working with Azazel ?.
Maybe you’ve been working with Azazel for years and desire to go deeper than ever.

Are you desiring to connect with his current, or to summon, invoke, become possessed or even going deeply into reverse possession.
Well use this prepare yourself for the potency of such a seemingly simple act is powerful. 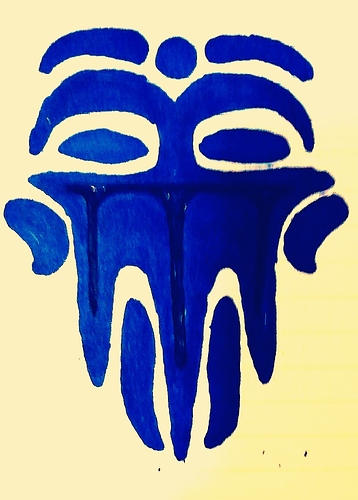 30 Likes
Azazel says to, "take a trip to the world under the sun", during channeling, not sure what he means
All You Need To Know To Work With Azazel
The Dragon Star
William_bey June 2, 2019, 3:52pm #2

Wow what amazing revelation ,and magnifincent expirence its crazy because alot freinds where telling me that azazel wants to work with me i guess this tops it all ,hail azazael

Quick question and possibly sloppy wording, do you feel like an aspect of Saturn (energies. power, etc) has been cut off/constricted/constrained in some way, relating to Azazel in some manner?

I believe the saturnian energy/power is going through a filter, so the full onslaught doesn’t hit us at once.

Sweet merciful crap , am I ever overjoyed at your return to the forum…

Quick question if your around currently @C.Kendall…if i may…

The only implement I am without , from your list is a Universal circle…I have plans to purchase one this payday, but have been using a simple tapestry of a Celtic mandala / circle.

It is plafed as an in erted pentagram, i also cast a circle and add a physical implement like salt or flour as a barier to keep in energy.

Will this suffice for this ritual or do you have any suggestions untill i recive my purchased universal circle?

Any pointers are much appreciated, thanks Connor. And anyone weighing in for that matter.