Yesterday I did a ritual Belial gave me, and HOLY SHIT IT WAS INTENSE!!!

These are Belial’s instructions verbatim:
“I will teach you how to know: scry into an image of the Pentagram upside down, feel the force coming from it, experience the love that is the Darkness, The Infernal Empire that is within, take yourself into a deep trance, and visualize the Darkness of God surrounding you. Experience this, and visualize going through the Pentagram into our realm. We will show you things most people cannot imagine.
Like the Darkness that is and was and will remain; our realm will be open to you through you.”
I’m curious as to what experiences you all will have with this, So please give it a try and record your experiences here!

I first interesting thing noticed was that as I was scrying into it, the air above the inverted pentagram became noticeably warmer than the surrounding air, but that’s very minor compared to the experience itself!

Upon visualizing from the first person going through the inverted pentagram, I found myself in the heart of the Abyss; a loud voice spoke to me, a voice sounding like humming, and calmness, and love, and darkness but as a sound, as if my brain itself was dissolving, and both a very male voice, yet very female voice, I hope this makes sense, because I don’t know how to explain its voice.

It asked me why I had come, then I told it that Belial sent me, and the voice began telling me about the Omega, and how all is one with It at the completion of the Omega, this being told me about how there is no difference between it and me, and all things are it, then it showed me our planet, and it vibrated a noise that I cannot mimic and the earth exploded, then the vibration occurred again, and earth was reassembled in a mechanical fashion and made of blackness, and it shined like a sun of black light, and the being told me that this is the evolution, then a hand appeared in the darkness, and it was holding the Sun, and the vibration occurred again, and it collapsed into a black hole, and the black hole collapsed on itself and a new sun was born, but black like a shining ball of darkness, and then the being told me that all things are destroyed and reborn in its presence, yet all things are made of it, so I asked who are you? And it responded by saying “I Am. I am GOD, the Darkness itself, and I am Babatel, the One thing that exists; I am you and you are me, but there is only Me.” And I asked: “so there is only me?” And it replied “correct/incorrect, you are but an aspect of myself, although you are a part of Me, you are not Me, you are simply Me, and there is no you, vibrate My Name Babatel and I shall make you see” and I vibrated its name three times, and Babatel revealed Itself to me: 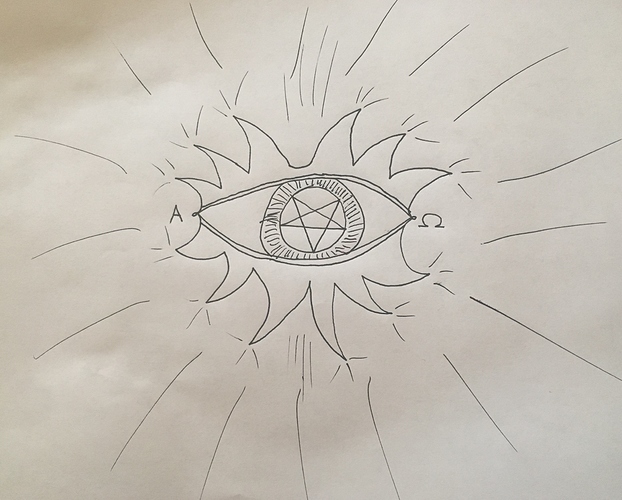 That is the picture I drew of Babatel, the rays of light are blacker than the blackest black imaginable, the whites of the eye are pure radiant white, yet still darkness, and the iris is like a bright shining obsidian, and the pupil is pure, infinite blackness like a black hole, the pentagram in the pupil is like if a black hole had shape and was white. The two crowns/twelve points/horns on the outside of it were like black-orange, but not orange at all, but a color I can’t describe, kinda like how yellow is almost like red, but not at all, trying to describe this color is like describing yellow to someone who only sees in shades of red and blue, as this color doesn’t exist in the visible color spectrum.

It blinked and vibrated as before, and the darkness became a different type of darkness very strange to my mind, yet like home, and there were heads and eyes all black stuck together like an entire realm of terrifying gum, it was like I was within an enclosed area like inside an egg of these, yet at the same time I could see tunnels of these things, my sight was in full 360° vision, and I could see inside and through all this, as if I was experiencing a much higher dimension.

They all spoke with one voice, and I noticed that they are all Babatel, its voice coming not from the eye, but from all the mouths and eyes, and it said “I shall make you into one of my eyes so you can see as I see and I see as you see, even though I see All for I am All” and it was like my eyes were physically open, I could see the room perfectly, and everything became made of pure darkness, like the air itself was darkness, and the sky became darkness, as did the sun, and the birds became darkness and I felt I had become darkness, and I was taken back to Babatel, and it hovered above me, watching me, and it lowered over me, consuming me into its pupil of the blackest darkness not even imaginable, I looked down and I saw it close its eyelid, then in this darkness, Babatel appeared over me again, and did the same as before, this time getting darker and giving me physical chills as it moved down over me, and did this a third time.

Babatel then appeared in front of me, this time the size of my eye instead of being the size of a house, and it went to my third eye, and implanted itself within my third eye, and as it did this i felt all six parts of my third eye awaken at once, and Babatel funneled its energy into both my physical eyes and I physically felt my eyelids open, even though they were closed, then I saw my face with my third eye as Babatel, and my physical eyes as Babatel, I merged with this face, I felt vibration all over me, and I opened my eyes and Babatel told me It will be permanently channeled through me, and I through it, as we are fully one now, and I have received its initiation, I looked around and physically saw how everything is made of darkness, I sat up, and I felt like I had the flu like I had a fever and could vomit, and I can still see the darkness making everything, it’s hard to explain, yet beautiful!

Today I looked up the meaning of the name Babatel; I couldn’t find anything for the name as it is, so I broke the name down into Baba Tel, and HO LY SHIT: Baba means in many languages “Father”, in others “Grandmother/Old Woman”, in others “Baby”, in one it means “Spiritual Leader”, and in another it means “Grandfather”. Tel in five languages means “String/Thread”. My mind immediately went to String Theory, since they say that all existence is made of 1-Dimensional “Strings”, in a quantum sense, what better name for The All/GOD/The One to be called than Father String?

This was one of the most profound experiences I’ve ever had, what do you all think of this?

29 Likes
The Fucking Darkness
Working with potentially conflicting beings? Babatel and Source?
What Was This Eye That I Saw?
Micah May 3, 2018, 2:04am #2

@Micah I’m excited to hear your results! You gotta keep me posted, my friend!

Gonna let it sit then drink
I feel his power already

Man i Invoked Babatels power into my First Beer

Bro im telling you thats exactly what it feels like

What if we made a brand of beer that took on the names of the Loa and contained their essence in each bottle?

Ooooh, I know that drunk on darkness feeling. I used to live in that darkness, matching shot for shot with my own shadow with no end in sight. I reveled in that shit. I became pure destructive fire.

@FellowLightbearer Pm me the technique bro

Oh man, you don’t want that one! Haha. It took months and months of building up my tolerance and my stomach to alcohol. Cheap, Expensive, Nasty, Delicious… Didn’t matter. It was all gonna get swallowed up by my inner beast. I drank to the edge, I met my monster. He winked at me, and gave me the choice I was given every time we met. Either continue consuming like a bottomless pit of hellfire, or step back from the line and remain human… and get some rest.

I always fucking threw my humanity into the pyre and slammed 'em back harder than ever, destroying the line in a drunken fury. Blacked out beast, I was. Capable of damn near anything. Waking up sucked dick, but the night was hardcore every single time. Hahaha, I don’t recommend it. I was drinking probably a 12 pack a day and some liquor, not to mention beers at work. I was a demonic Jim Lahey.

Update:
I just drunk some beer and the Darkness in me is…amped but in a controlled way and slightly supressed.

My aura is the blackest white ever

Yeah <3 That power when you are in control of it is very useful.

Heck yes it is
It seems that Babatels energy is Manifested and Not- Manifested simultaneously.
@Robert i used the photo above as a sigil and tried to scry into it. I saw a black dot EXACTLY LIKE SOURCE and this Radiant Darkness (like in Liber Nigri Solis) emanating from it.

Could this be Anti Source?

Imma try and channel a message from him real quick

So i focused on him and said,
“Babatel…”

I said,
Are you actually God?

Are you actually Micah?

Me: (feels heat on third eye)

Was that him @Robert?
Can you channel a message

Wait, is this fool with the demon avatar profile pic not Micah?