Hi everyone, Appart from feeling a compulsion to work with Lucifer, for a long time I have also been drawn to Baphomet.
Ages ago I walked into a store which had one statue of Baphomet on sale, at the time I was literally just browsing, I had never looked into Baphomet at the time but I ended up impulse buying it… I even haggled the price down too they seemed all too willing to let me have it, but given it was not an occult shop in any way I was quite surprised that it was there in the first place!

What I’ve found around the net much like when it comes to Lucifer is that there are lots of wishy washy takes on Baphomet, some claiming he was fabricated, others that he was an ancient god and others that he is representative of Satan… So I would like to know if you guys can provide me with your insights on Baphomet, or If you can link any decent reading material I will also be happy to look into it. Also if you have worked with Baphomet please let me know how, why, and what the experience was like.

Look to the man who drawed baphomet. Eliphas Levi.

Ah yes the Baphomet, it’s an old Templar code word translated with the Atbash cipher as Sophia and in the Gnostic that’s wisdom for a more full detail of Sophia it’s here. —+> https://www.brooklynmuseum.org/eascfa/dinner_party/place_settings/sophia
Now this is a page dedicated to a feminist dinner party but she really makes all these wisdom goddess connections in her post that I thought what the hell she spins a good yarn. All the wisdom goddess info in a nice clean brief overview.

The code translation is below

I Blieve That Baphomet Does exist A Time Ago (around 3-4 years) I Had A Scary Experience I Felt Fear For The First Time,i Woke Up Took my phone and Opened my Selfie My Camera When i did that after a while i Saw Him Behind Me (His Head In the Wall Behind My Bed) I Was Really Scared I Thought About Running Out Of The Room But A Vision Came To Me That He Would Grab Me If I Did that So I Collected the courage In My Heart And Turned To Face Him But When I Turned He Disappeared (Back then i was a muslim And i didn t know anything about the occults and Baphomet…) After that I did Some Research about Satan Head… And I Found Out That His Name Is Baphomet The Picture In The internet Looks Exactly Like The One I Saw
But Still I Dunno Why He Appeared To Me…

That’s interesting, seeing as the Baphomet is a representation of wisdom I would think that it could have some to do with you gaining wisdom and knowledge. This forum is a good place to do just that.

Yes That s Why I Entered This Forum

Thanks for your input people! I’ll keep reading and seeing how I can fit this in to my own work

As i emerged with my power animal, i became some sort of baphomet

I think he appeared to you to ask you something of to do business with you i call him he because i treat him like a man and it dosnt border baphomet at all i love him so much .

Baphomet brings growth. There where a Baphomet mass takes place everything grows and increases: power, energy, magic, demonic, vegetation, flowers… Baphomet is great to work with.

“As Above, So Below”

The history seems a little murky. Some believe the confessions concerning the Templar’s. Some believe Baphomet is some type of entity from a gnostic or Hermetic system. And others just think the answer is Elias Levy.

Regardless if Baphomet is just an archetype or is an egregore, you can invoke and evoke this entity. I have personal experience with invocation and evocation of Baphomet. I do believe this spirit has evolved into full sentience and has been conscious for quite some time. I basically work with him/her the same I do with say Lucifer, Azazel, or even my succubus.

However you work with Baphomet your sure to learn some deep stuff. Pay attention to signs, symbols, and synchronicities too.

To me, Baphomet is the union of the trinity consisting on:
1)Sun (the light)
2)Moon (the darkness)
3)Caos (the Void, the Abyss, the conection).

Baphomet is a tulpa, and probably a sentient being by now. Meaning, it may have been created during the Middle Ages and given an image by Eliphas Levi, but it has become an independent consciousness of its own by this point.

I found this article, in which a Freemason describes Baphomet’s name as meaning Baphe Metis , a baptism of wisdom aka being plunged into the cunning wisdom mindset of Zeus’ concubine.

This type of cunning combines intellectual brilliance, guile, and versatility (resilience), which were qualities highly esteemed among the Greek population and aristocracy. Metis was the female embodiment of this mindset. The male embodiment of it was Odysseus.

If these authors are to be believed, Baphomet would then bookmark Zeus’ life and serve as female cornerstones to his power: as Amalthea, giving him strength when young, and as Metis, drawing strength from him through cunning in his prime. Baphomet in different forms would then be Zeus’ guardian of sorts.

The interesting thing about the second and third articles is that they assume a connection between the Knights Templar’s veneration of Baphomet, and the Levant cult of Asmodeus. The author there suggests that the two spirits are identical.

I don’t buy that assertion. Being as Baphomet was a prosperity and fertility spirit, it would most likely be linked to Amaymon (aka Abu nuh Maymun or Mammon) rather than Asmodeus.

But hey, everyone has an opinion. Conjure for yourself and ask questions. You’ll find out who’s who and what’s what when you go direct.

3 Likes
Is Baphomet is a real deity who exists or just fiction?
Is Baphomet the child of Lilith and Samael?
fallenshadow June 7, 2019, 7:25pm #17

As a note, the modern ‘Baphomet’ derives from Eliphas Levi, who referred to it as ‘the Goat of Mendes’, the Egyptian God Banebdjedet (an aspect of Osiris), worshiped at Mendes. Horus the child was said to be offspring of Banebdjedet.

The Upper Egyptian form of this god was Khnum, whose offspring was HEKA - the Egyptian word for Magick (which was also represented by a deity).

Many people view Baphomet as a force and this Egyptian view is pretty interesting.

Although I haven’t read it yet, here’s an interesting Grimore https://theionpublishing.com/shop/faceless-god/ which connects Banebdjedet with the European Sabbatic craft.

Meaning, it may have been created during the Middle Ages

I think it was, but accidentally.

The Templars that first mentioned it may have just spouted that name to satisfy King Philip IV. After all, anyone would say anything to get out of being tortured.

That makes a lot of sense, actually.

The connections are pretty interesting

To call on Baphomet. First the invocation of Chaos:

And than invocation of Baphomet:

In the first aeon, I was the Great Spirit. In the second aeon, Men knew me as the Horned God, Pangenitor Panphage.
In the third aeon, I was the Dark One, the Devil.
In the fourth aeon, Men know me not, for I am the Hidden One.
In this new aeon, I appear before you as Baphomet.
The God before all gods who shall endure to the end of the Earth!

I just saw this today on youtube. Its the album cover to the Sigil doom mod.

I’ve seen variants of that sigil but it always reminded me a little bit of the Baphomet. 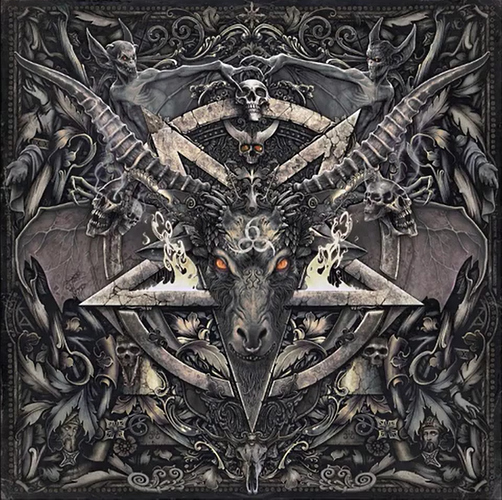