So I’m doing some research, and I stumbled upon this: 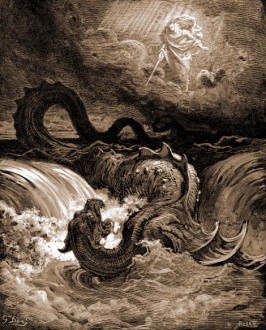 Is the Biblical Yahweh actually a Dragon?

Destruction of Leviathan by H. Pisan (1822-1890) I found this interesting topic on the Unexplained-Mysteries.com forum. I am neither agreeing or disagreeing with this article, nor have I researched…

Makes so much sense tbh. This means that the “demiurge” (Yahweh) = dragon, and his “archons” = reptilians. David Icke was right! The world is ruled by reptilians! READY YOUR TINFOIL HATS, BALG

Alright, seriously, though, what are your thoughts on this?

Ps. here’s the forum thread mentioned in the article, which has more information http://www.unexplained-mysteries.com/forum/topic/106266-is-the-biblical-yahweh-actually-a-dragon/

@Baal I disagree with the assertion that their is a Creator at all. Also I find this article blasphemous, because it insults the Draconic Patrons who work towards the ascent of humanity by associating them with this being of false light. No, I do not agree.

Not my article, but I still find it interesting, nonetheless. The evidence does seem to suggest that Yahweh could be the dragon Yaw.

I’m an agnostic when it comes to a creator god(s).

But, anyway, I can offer an alternative perspective:

But, anyway, I can offer an alternative perspective:

Perhaps, I mean some demons think of humans as food as well. Honestly though, I do not like the idea that the god of false light has anything to do with the wonderful beings I work with.

It’s an unpleasant thought indeed. And I like dragons! I was obsessed with dinosaurs and dragons when I was a kid.

The idea though makes sense to me at least, not all beings, spirits, etc are homogenous. I don’t see why every single one of them would like humanity.

The idea though makes sense to me at least, not all beings, spirits, etc are homogenous. I don’t see why every single one of them would like humanity.

You have a point there.

Also I find this article blasphemous

Blasphemy is kinda in vogue around here though!

I found the troll god itself to be the husks of the hopes of a group who has externalised their godhood into the form of a malevolent desert entity, a group of us did some work on this last year - obvs., churches etc won’t crumble overnight and there is still some cleanup to be done on various sidelines and traces though.

I'm warmly inviting any forum members who are personally angry at the troll god of the Abrahamic faiths to join me in an important magickal working, this coming Sunday the 11th of September. This invitation extends to people practicing within all paradigms and at all levels of experience - the only pre-req is a genuine and heartfelt feeling of rejection, disgust, and/or anger directed towards the entity (or if you prefer, the thoughtforms and actions initiated under the Abrahamic faiths, and t…

This was one of the most powerful pieces of work I've ever undertaken, the spearhead of years, maybe decades, of intentions, so it's been a bit daunting for me to try and fit it into forum postable size, but there were some events that I want to share because they blew my mind, and these days that’s not easy. :slight_smile: This post is in two parts because those are the main events (also, there’s a word limit) – so, long post alert. Materialisation On Thursday 8th I was asleep and dreamin…

The Nature of the War

This is kind of a general reply to, agreement with, and sharing of findings in reply to your video: My working model of “Ahura Mazda” and the forces of law (including angels) is that they are kind of the presets on a game, somewhere between an adventure-quest and a Sims-like world where you create stuff for the fun of it, and if you want to play battles, quests, whatever, you have that option, either before entering the game (controversial I know for those who have had childhood traumas) or,…

If Yahweh is a Dragon I have yet to meet him/it. So to be honest I highly doubt it. One reason being, do you know how many Dragons have been “slain” in his many names?.

One reason being, do you know how many Dragons have been “slain” in his many names?.

Can you provide names? I have a ritual for invoking dead gods that I would like to try out (someone’s probably already done it, but still it’s worth a try). Not right now. I don’t think I am good enough, but I am working through a certain Path, and bringing forth the power of dead dragons seems to be a goal worth aspiring too.

Read the article, and the forum thread. But, I’ll summarize this particular bit:

Yahweh is jealous, and vengeful - he does not tolerate other gods. Suppose that he’s a dragon, he wouldn’t be restricted by a kinship bond to wage war on other dragons. Yahweh waged war against his brothers, so I don’t see why not.

Somewhat related: Marduk is a slayer of Tiamat (who is a dragon(kinda)), and one of Marduk’s animals/forms is a forked-tongue dragon. Just as humans kill each other, it’s not unusual for beings to kill their own kind.

If you have a bible you might find some names in there. But off the top of my head no. Looking up legands of “slain” Dragons might help too.

Also would love to hear your results when your done.

If you have a bible you might find some names in there.

Of course I don’t have a bible. I am not Christian. No one in my family is either.

Also would love to hear your results when your done.

Might be quite a while before I am ready, but I will be sure to update you when I do.

Sorry wasn’t thinking. But it is good to have one for research resons and you can allways deface it or corrupt it to deactivate it.

But it is good to have one for research resons and you can allways deface it or corrupt it to deactivate it.

Might actually be harder to justify acquiring a bible to my family than justifying acquiring all those grimoires (that was honestly pretty easy). If one ever drops into my hands though I will be sure to keep that advice in mind.

You can download a PDF version of the Bible, if you don’t mind reading from the PC.

I will probably print then. I need to desecrate one for a ritual that I want to do.

The phrase that always works for me. “It’s for research purposes”.

@Ozraga For “entertainment purposes” tends to work as well. If it’s a grimoire that I am trying to acquire though a few blatant, flashy “in your face” style demonstrations of magick have proven more persuasive than anything. A sort of “See it works. Now let me buy the book” sort of thing.

Exactly my veiw on that too. I don’t doubt the existence of a divine creator entity but at the same time we can’t exactly prove that the world was created by some god(s). But, what matters now is the fact we’re living in a systematic world hosted with life and spirits, and the past has been done.

The article is quite interesting, actually. Asenath Mason doesn’t lie when she states that the Dragon/Serpent can be found across the world, in all beliefs. We practically live in a Draconian world.

It’s because of this reoccurring theme that I don’t think people who claim they’ve seen or believe in The Reptilians are crazy. In particular states of consciousness (altered, of course), people will see consistently, among other things, reptilian beings. Not to mention that there are tons of references throughout ancient cultures about reptilians, even if those cultures never had contact with each other.

However, I don’t think they are literal reptilian beings, but rather things which are more commonly perceived as reptilians, but it’s not their actual form.

It’s actually more complex than that, but for simplicity’s sake, that’s something I “believe.” Belief is such a strong word, eh…more like assume.