I really like @Mike_Bee’s thread Spirit of the day, reflections, meditations, and thoughts . I find it informative, interesting, and insightful. I really enjoy the personal stories he gives, where appropriate.

Once I bought that same deck, I knew I was going to to SOMETHING with it, but no idea what. The idea came later.

I’m going to pull a card from the deck, evoke the spirit, and ask to learn a lesson of sorts from it.

That figured out, I gave Mike a head’s up to both make sure it was different enough and to let him know he was the inspiration. It went well.

Next up, the text of the agreement.

I decided to write my own request statement. It’s largely “loose” on purpose. Some of these entities have a wide variety or really different areas they are in charge of. If I.box them I to a specific one, that limits MY growth. So, this is what I came up with, warts and all.

I ask you to teach me a lesson and/or grant me wisdom appropriate to your purview and abilities. This should take no longer than 2 weeks, unless.you acknowledge that. I will call upon another at that time or when I am told the lesson is complete, or the knowledge gained, before that.

These lessons and/or knowledge will not interfere with my longer-term workings I have started already.

If these conditions mean it is at an impasse or unacceptable, let me know immediately and I will choose another, saving your experience for later.

At this point, they accept or reject.

The method. 3’s, per the deck’s suggestion. I don’t need the rest of their fear-based approach. I liked the shuffling method, so I will largely adopt it and leave the rest.

I split the deck into 3 parts. I shuffle each part 3 tomes with 3 over hand shuffles between. I then shuffle parts 1 and 2 in the same manner. The add Part 3 on top, split, and do the same. I then pull the top card. That’s the spirit I will call. 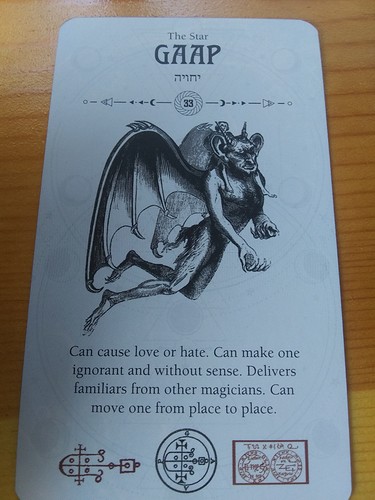 Haven’t met Gaap. Haven’t met most of the Goetia. Most of my path has been spirits coming to me or suggesting who to go to next.

I called to Gaap and asked him to come. I could feel him taking about the edges of the ritual.space, but not coming front and center. That’s fine. Here’s why.

If evoking a spirit to full manifestation was actually necessary, there wouldn’t be much knowledge available at all. Petitions would never get answered (and we know they do). There would be no interactions outside of a triangle (and we know there are). It’s a useful.skill to have, but largely not needed as an “absolute” for progressing.

Here, Gaap was choosing to hang back and I was choosing to not force him. Not much of a partnership, when forced. Really, I’m cold calling an entity and asking for a favor.

He was present, but held back. Cautious (?), but willing and a part of him eager. He accepted my incense offering of Sandalwood. It’s the best I have at the moment.

So, we’ll see what Gaap gets up to over the time period. I couldn’t get a sense of what his plans were, based on the card description.

Likewise. Gaap is one Im about to call on, even though Im starting with Presidents and working up within my petition, going up the chain of command…

I just pulled from the deck.

To be honest, they seem to WANT to come, if we have the ability to listen. I don’t want to do it by force and would select another card, unless something really told me not to.

I felt I should give Gaap some incense (happened a few times), so I semt a feeler out and asked him to choose between Sandalwood and Myhhr (both cone) or the super cheap stick incense (I got at the dollar store). I lit it and went about my business.

Before the cone was burnt out, I see this…dog, a puppy, come into my space, followed by Gaap. It had been abandoned(?) by its owner and was no longer wanted in their space. I’m a cat person, but Gaap wouldn’t have brought it without reason.

Like all my familiars, I warned it that I get wrapped up in what I do and may forget (likely, at some point). But he could have the run of my space, so long as he abided by a few rules, as all must who come and go in my space.

As I was going abput the 3rd rule, Gaap caught my attention. This familiar helps change negative emotions to positive ones (in the environment).

I’m very pleased to see this kind of interaction taking place with the 72. I think you’re really going to enjoy how your project unfolds with time. I know I’ll be enjoying reading about it. 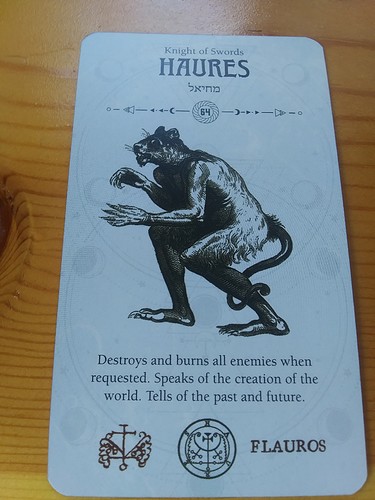 As I went through my agreement text, I could feel him hanging about the area, shifting, moving. He was sizing me up - was I prey or not?

“I accept”, I heard as a whisper from two points as the sound moved.

I acknowledged, lit some incense for him, and wondered.

I felt I should light some incense for him and heard, “I will bury him for you”.

The Knight of Wands from my tarot thread. I told.him who was on it and this spirit didn’t want other spirits taking part. Yet, the two apex predators acknowledged the other and it was all good.

No idea when that will happen. It was understood that the 2 week rule applies and I was prepared to make this an acknowledged exception. He nodded, but I wasn’t sure if that was what I said or whether he didn’t expect it to take that long.

Now “bury him” could be literal, but could also mean that jackass is out of the way. I won’t know, but this person was attempting to subvert the will of a female for his own pleasure, witj the intent to turn her into a fuck puppet.

So…whatever the God/desses decide… I’ll still be doing what I do.

And there’s no cleanup involved! I can handle that. Little guy is only a thought away at the moment.

Yeah, I knew what I wanted to do or should do, I guess, but asking them for “lessons” could come out a lot of different ways.

I.did take Gaap’s card from the deck, so I can interact with all of them before starting over.

Bravo man I salute what you’re doing and I think it’s awesome.

When I did the 72 challenge I feel like I worked so hard just to get through all 72 that I missed out on alot of lessons and personalities in the 72.

Doing it the way you’re doing it you’ll take your time and really get to know the spirits.

I started on the 72 when I first started evoking. Belial wanted to.provide overwatch for it. Insisted upon it. I started from Z and worked backwards.

I don’t know if I still have the notebook paper I wrote it on, but more than one was hostile. I don’t remember their names, as this was in late 2018. If I still have the paper, I’ll make note of it. I stopped near Purson.

I do remember that Vine came as a female and at that point, it blew my mind that it was King Vine and not Queen Vine. I’ve seen some other as female, but not from the initial introduction. Clearly, that stood out.

That’s unusual I agree. I wonder why spirits do that. Show themselves differently to different people.

King Vine looked like a leonine maharaja with blue skin and a pointy beard to me. Lol.

Edit update:. Haures was real hostile to me the first three evocations with him.

I don’t know. Leviathan used to come as both when I started, to teach me to target/know the spirit and not the looks/presentation. He’d switch in the middle of ritual sometimes.

Belial did it a few times, too, actually, once I got “confident”, to make sure the lesson stuck.

I reached out to Haures to see if I should wait or continue for his working/lesson to complete. He seemed amused by this, since I already knew the answer. He waived it off and wasn’t concerned.

I shuffled and drew. Balam. 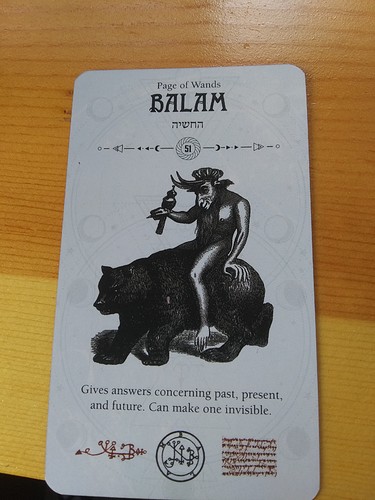 I sent a feeler out to see what incense Balam would prefer (from what I have). He chose a patchouli stock and a Myhhr cone, both of which had purple packaging. I noticed it, but don’t know that it has any meaning. I had yet to formally call him, but he was waiting for/expecting my call.

I called him forth and read the agreement. He seemed like he was listening politely, but that most wouldn’t apply. Didnt make sense until we got down to business.

B: “I will grant it to you now. Those baby mice you found as a child, took and returned. The mother killed the one you held the most. Do you know why?”

(I didn’t know the outcome, but remembered the mice. I was 5 or 6 and returned them within an hour)
M: I didn’t know. I didn’t go back afterwards to try to make sure they’d be okay, due to my scent."

B: “Yes, your scent. Your scent was strong on that one. But only that one was killed (scent was strongest). You interfered with a natural process. Did you know?”

M: (The question irritated me) “Of course not.” (Does magic not interfere with natural processes?)

B: “(He smiled) It does. You wondered aboit those mice and still do from time to time. I brought you your answer.”

(He turned to leave and paused)

None of this was said or meant unkindly. There were other things going on with intent being pushed in pieces that didn’t make much sense until after he had left. The intents were a mixture of words and feelings, to keep it simple.

In one, he showed me the time, the exact moment, I found them and then an intent of “the powerful _____ the weaker”. I don’t know what the word was, but it was a mix of manipulate, interfere, interact, and subdue.

The next was where he showed me where I had held that specific one in my palm, when they were all in my hand. Right hand, middle finger. “Selected” came to mind, but not whether it was my selecting the mouse or something else’s.

The final words, “Keep interfering” had loaded meaning. It absolutely meant to keep practicing. It meant that we have to live with the unintended consequences of all actions, good or bad.

It also meant that to not, to quit (not on my agenda), means we’re just as vulnerable as those baby mice - subject to the whims of others, whether intentionally harmful or not.

Hail. He grabbed my attention as well as your analysis did. Great job!