How can I free myself from Demons which are molesting me?

I have a problem.
A year ago I called Disodioria and she sent servants which are molesting me sexually.
I never did anything to provoke her.

What have you done so far to try to get rid of them?

I have no idea what to do.
It’s not every night but last night it happened again.

Or you could banish the fuck out of everything.

what did you called her for?

There are a number of different ways to banish them. In Kingdom of Flame, there is a banishment enchantation I believe. There is also the Lesser Banishment Ritual of the Pentagram. You can do a Limpia to remove attachments and curses. There are many forms of smudging (burning sage, pine or other herbs) to banish spirits. There are many many different techniques. Or you can get another big gun spirit involved. Since Disodioria is a spirit of maddness and maddness can be defined as a disease, I’d recommend Pazuzu as he is a guardian from sickness along with baneful spirits in general.

It is a wonderful chance to test your abilities and evolve yourself, and not only spiritually. You can banish them, and protect yourself better. You can find several option what can help you, on BALG.

There are some useful methods for you:

A limpia is a cleansing ritual that cleanses of negativity, sickness, and curses. The following is a very simple version utilizing an egg. There are more complex versions with accompanying rites to dispel stronger shit, but those are better taught in person for it to be done correctly. Anyhow, some of ya will probably find this useful when you got someone giving you the mal de ojo (evil eye) or if you have a coldor something. Take a raw, unused egg. Completely virgin. Wash it in a bowl of holy…

This is a very short and simple share of the banishing methods I have used against the current problem some members seem to be having: Assertion Of Authority I have successfully banished this thing by using the statement: “In the name of the Most High I command you to depart” Note that this is NOT about “god” as in desert tribe monotheism, it’s a call upon the most powerful aspects of the self. The LITERAL Living God Within, in other words – the highest aspects of the self, however you conce…

This is a copy of a post cached by the Internet Archive from EvocationMagic.com, that reproduces an earlier post from Occult Forums: I Am’s Solar Grounding and Banishing Rituals Postby Vovin on Wed Dec 05, 2007 1:22 pm Archived Link This was posted on Occult Forums a few years AGO i have used it and it definitely works it takes awhile to get the hang of… Solar Grounding Ritual Visualize yourself as growing very large…huge. Grow until you can put one foot on the Sun and the other on the Ea…

What you have to know is, that you are not subordinate, so you have the choice to refuse their approach towards you. I’ve met several cases where the vessels called it “rape”, but deep inside they really wished for it and enjoyed it in those moments, because in fact: either way it wouldn’t have happened.

A year ago I called Disodioria and she sent servants which are molesting me sexually.

An important question: Why did you called Her? What was your goal with it?
Nothing is happening without reason, and you know every details about your own case. Probably even the answer.

In Kingdom of Flame, there is a banishment enchantation I believe

Tiberius is correct. You can also get the ruler of her Kingdom to reign her in. It is helpful to actually study the grimoire you are working from.

Just about anything the Op needs for this is right there in KoF. Mixing systems is not necessarily a good idea here

Thanks for your advices!Can anybody tell me how I find the KoF ritual? Which page? Or the name? I have the KoF as pdf and as book at home. Want to search through the pdf.

@Nagash
I called Disodioria because I had a psychosis.
I think I wanted she to help me against the fear to fight but in this time I was not really rationally.
Whatever she never helped me only molested me.

Now you got the chance. I feel the irony in this.

Whatever she never helped me only molested me.

You have to fight now and find a way to solve this ‘problem’, so if you overcome it, it will be a part of your development, evolution, a part of the way how you become better. 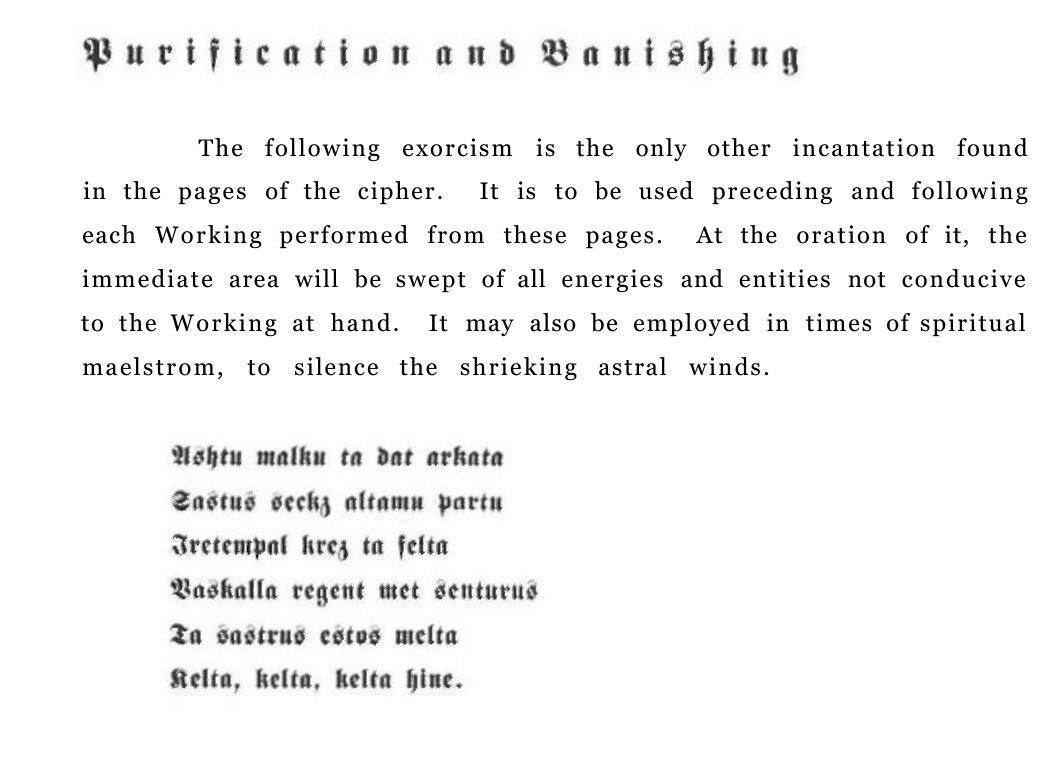 Is this the meant Banishing Text?

What you want is in chapter four. Also Disodioria is not the spirit for your particular goal.

Is this the meant Banishing Text?

I am going to learn this banishing from KoF.
Stands sth. against trying to contact Pazuzu?
Because Faustus meant, mixing systems is a bad idea… And what to do if the banishing doesn’t work?

Do not mix systems. People telling you to do so have not worked out of this book. I would proceed first by calling up Disodioria and asking her what’s up. Tell her to stop. Failing that, you still have the ruler of her Kingdom to turn to as well as the exorcism. And don’t forget the Seal of the Sorcerer.

I think so to.

Her ruler should be Pendralion… Am I right?
I will try to contact him but I have not much hope for getting an answer.

That’s correct. Pendralion is not that difficult to deal with. Call on Disodioria first. This could be a simple misunderstanding that can be easily cleared up.