Well,one day, i was talking (in my head) with Belial about sex, and i asked him:
Why don’t you send me a sexual lover from your realm?
the answer was “done”…
tree days after, i had this first dream:
I was somewhere during the night, and a she-boy woman/man appeared for me,
she looked like Ruby from the series Ash vs Evil, but she looked younger, red hairs till her shoulders.
i can tell you that was a she-boy/she-male, because this entity have show me her/his sex, and it was a massive cock, haha!^^ 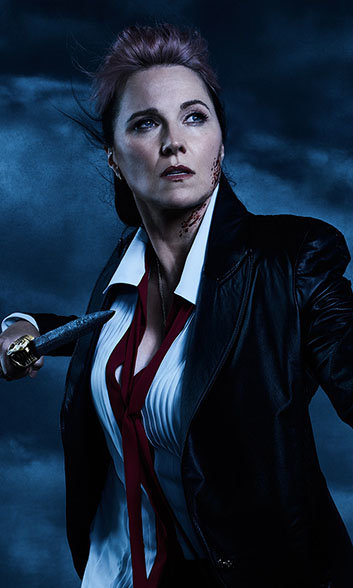 The strangest feeling was, while the looking was that of a woman, the general feeling was like i was in front of a man,
the energy of someone extremely virile,masculine and strong, a fighter or a warrior!
i waked up!

The second dream, that was exactly the same entity with the same looking, she tried to seduces me rubbing her boobs against mines, it was pretty exciting, but at same time i felt right way magick was done over me, in waked life, there is no way for a woman to excites me, nothing against the LGBT , i love homo people, hehe, but ask a “straight” homo if he wants to do it with a woman, he will say “ho hell no” haha! I am like that too, woman just dosen’t excites me, and it is pretty normal, i love cock and a deep male voice moaning is what makes me go to the sidereal space in bed!^^

In this same dream, she have sit beside me, and wanted to do a pink promise: “i want to be forever with you, forever i will be your friend”
i said to her : “i will release you when we are done”
And i discovered in the same day, that one of the known Ruby phrases of the series was : " I am now your new best friend"?!?

I had doubts if Belial have sent her to me, and i had this third dream:
I was in a room, and two persons where getting sensual with each other, and they where: the Ruby looking entity, and well, E.A ?!?
this time the Ruby looked like a woman, she was naked, no male genital!
They have fall in the ground over a velvet red carpet, and they wanted me to join then, what i have not done, i just wanted to watch what would happens, waked up!

Then, i said to Belial that i was not interested in she-boys, and all of what Lady Eva has already put here made sense: Belial was trying to change my sexuality for what he jugged was the best for me, hahaha!
I said to him, please stop that, and send someone for me that is sexually appealing to my tastes…
Another dream came to me:
I was in a house plenty of women, and we where introduced to each other, all of a sudden, all of then just begin to kiss me and caress me all over the place, i got so angry with that, in my dream i shouted: I FUCKING LIKE MEN, STOP IT RIGHT NOW!
they stopped, but the oldest woman in a corner said to me: "you don’t like it now…but in 26 years you will!!!
(Belial?!?)

Since then, i have saw some she-boys in my dreams, just showing, but they don’t try to seduces me anymore, haha!

But i feel the Ruby looking entity is still around, and i would like to have a true relationship with her/him, only if it is not sexual for now!^^

lol he is a one for trying that kind of thing, that’s brilliant!

This is actually a great result though, so congrats!

Haha, so true Lady Eva, and that was so good to know what was coming in my way before, that because of your topic about Belial, haha,
Brilliant indeed, he just choose a woman looking entity that with all of the qualities I look about men, lol,
It remembers me about the other OP and the finding of the Ying-Yang stones,
Looks like Belial wanted me to have someone half man/woman by my side, just like that, such a trickster, lmao, I also love him about that, making people see things with new perspectives, and put us in new situations just to see how we would behave or act, and always with a new life (freaking) lesson in the end!

You experience something quite different from what you usually are customed too. Did this open up a new perspective for you? Would you be willing in some time down the road to try this stuff or at least have a wider perspective of it?

I realised that I sounded like one of them journalist.

“Uhm, yeah. How do you think of this yada yada. Whatcha gonna do about it?”

I think ONE reason he does this is to see how an individual weighs their personal values, drives, and preferences against expediency and immediate gratification, which is really the question of all ages when it comes to who you are, and what mastery you have.

To see them as a choice rather than either as absolutes is, of course, the pinnacle that crowns dualities.

12 Likes
Belial and The Dogma of Resistance
Do spirits care about our social or political views?
Sheogorath March 4, 2018, 2:14pm #8

Sheogorath, no, I am not planing in trying spiritual sex with a she-boy, my body and mind just can’t feel attracted by it, lol!
But I know in the spiritual world some stuff just doesn’t happens as we asked,specially about random sexual requests, haha,
This is a yada-yada shit again

The spiritual world is full of surprises. Especially suprise butt sex from some accounts of people…

Like always Lady Eva, you just write the good words, magickal! And what I was thinking too!

Haha, you said, with Belial there is always a " butt surprise" somewhere !

think ONE reason he does this is to see how an individual weighs their personal values, drives, and preferences against expediency and immediate gratification, which is really the question of all ages when it comes to who you are, and what mastery you have.

To see them as a choice rather than either as absolutes is, of course, the pinnacle that crowns dualities.

I was thinking in something to add about your message, but the only thing that comes in to my mind is, like you said before : "Brilliant"
Each person their own level of strength, for you Belial has sent armies to put you in a test, ( because you can do it)
for me that was sex, haha!
This week I had some gorgeous blond men during my dreams, seems Belial and Lucifer decided to give me some holidays, lol!

Haha, you said, with Belial there is always a " butt surprise" somewhere !

In my case. What do you think he would do?

I am a Male, and I quite frankly haven’t researched up on Belial yet.

There is no way I could answear you about that, with all entities that is a case by case basis,
But seems he is doing his moves with men and woman,
If you ask for sex, Belial will give it to you, but I am not responsible about how it will come, lmao,
If I was you, I would sleep from now on with my pants knotted tigh!

And a lubricant just in case. You either are sore or you have a damaged ring😂

Yes, that’s Lord Belial! He’ll challenge your sexuality for sure.

Sometimes when I’m “whisked away” in my dreams, I’ll find myself with both genitals. Accompanied by crazy realistic sensations, despite never knowing what it’s like to physically have a penis…

Either way, it was super hot… Not gonna lie… lol

Yes, that’s Lord Belial! He’ll challenge your sexuality for sure.

Sometimes when I’m “whisked away” in my dreams, I’ll find myself with both genitals. Accompanied by crazy realistic sensations, despite never knowing what it’s like to physically have a penis…

Either way, it was super hot… Not gonna lie… lol

Well, it was definitely easier to pleasure compared to a vagina for sure… At least, in my case… Also, thick moisture in any sense enhances the feeling, especially the head… Lube, saliva, sexual juices… Also, when someone backs up into it and it enters… having the feeling of flesh encasing around it… I don’t even know how to describe it… Now, an ass differs from a vagina for sure…

The vagina is more velvety and it just fits!, is the best way to describe it. Oh the moisture tooo… Ooohhh… While an ass is tighter usually(depends), it just feels rougher, but it has it’s own pleasures as well… Also, I’ve noticed when I really get into it, the bucking is purely primal and instinctive… The pleasure is immense… You can feel the pulse and everything…

I’ve also had it wrapped in latex and tortuously stimulated, tongues, hands, rubbing… Like being milked…

But yeah, that was my experience during some of my dreams… Ahaha

Can you do me a favour? Next time you have the chance, tell me how it is to be kicked in the coronas.