You read the title right. Last week, I had a late night/early morning dream on September 15.

I was in a nondescript park on a sunny day. It was just like the many parks we have in D.C. No big deal. There was this striking beautiful, attractive dark copper complexioned (assuming African-American) woman, long shoulder-length black hair, mid-20-ish sitting on one of the park benches. She was dressed in a navy blue pantsuit. Despite her looks, she could easily blend into the corporate culture of the D.C. area.

Something inside of me knew it was Astaroth. I called out to her, unsure. She said, “Yes, it’s me. I came in a more pleasing form to you. Call me Astara.”

She got up and kissed me. Next thing I knew we were in bed together. Let’s just leave it at that.

I wonder if this was really her or if it some entity posing as her. In a previous post, Astaroth appeared as a pale-skinned (assuming Caucasian) woman with a 1920’s style redhead pixie-cut and a long sleeveless black silk velvet dress.

I was napping in front of my altar in the living room. This young woman with short red hair in a pixie cut, pale skin and a sleeveless long black silk dress appeared before me. I called out, "Astaroth?" She said, "Yes." I asked many questions, but I restrained myself from asking about mundane stuff like money. I think she appreciates that. She showed me several images. I felt like that she was preparing my mind for something. Getting it in tune. It was like I was moving, but still at the same t…

Coincidence: In front of the Wilson Building (D.C. City Hall), there was a DC Parks and Recreation promotion about DC Parks!

I just started watching a show “Devils and Realist” and this is what she looks like in it. 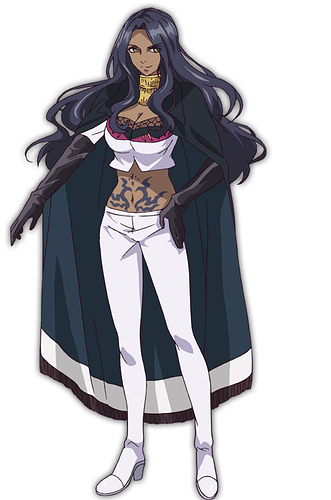 How uncanny! This confirms that I’m not in some kind of delusion. Even the cartoon’s skin complexion is similar. But no tattoos.

Love when this kind of synchronicity happens. I wouldn’t think of the tatoos too much. All of the higher ranking devils have a mark somewhere on their body. The author’s artistic flare.