Not sure of what approach I want to take with my ex and his girlfriend, which he keeps denying. I’d like to know what you, the reader, would do in my situation and what approach you’d take if you were in my shoes. I’ll try to make this as short as possible.

My Ex: He conned me out of 35K in the year and a half we dated. The entire time, he made himself look like he was going through a major financial struggle and me being the idiot who cared & loved him helped. Only to learn that him, his family and his girlfriend of 2 years (which he always denied and said she was just a family friend) benefitted from my help.

The Girlfriend: I told her what happened between him and I and she confirmed they had been together for 2 years. I was surprised that she acted very mature and understanding towards me once I confronted her about the situation. Initially I had no ill intentions towards her, until he (my ex), reached out and told me to stop harassing her. She told him a bunch of lies I never said, in fact, they came out of her mouth. I even have messages between her and I but he refused to believe me and said he would call the cops on me if I kept harassing her. She now parades her adoration for him online but he still makes no public acknowledgement that he’s with her. Why is this important? Because now I also want her to pay for her BS stunt of making me look bad. She’s 40, still lives at home with her mom and has no job. Yet she portrays herself to be this strong, independent badass who is not to be messed with. People who have seen them together think she did something to him (spellwork). When I say she is FUGLY, it’s not out of jealousy or because I’m scorned. People are seriously shocked when they see a picture of them two. Hence why I never believed that he’d be with someone like her.

Anyway, I want both of them to pay. To lose everything and be absolutely miserable and suffer every way imaginable…but slowly. But I’m still wondering how to make this happen or what approach to take. Your advice is greatly appreciated.

P.S. - He has yet to pay me back anything and I did look into suing him but even that worked out in his favor. This is money I worked hard for and refuse to let him or his gf get away so easily.

You could try Raum for a curse of vengeance, The Morrigan for justice, or, if you want to cause chaos, as long as they don’t even live near you, Andras. Andras is awesome but a live wire, and you can get caught in the crossfire so he’s best when you have little contact.

Bought a brand new spell book the beginning of this month. I have lots and lots of spells you can try if you would.

What book was that you bought and who wrote it fo you recommend it ? 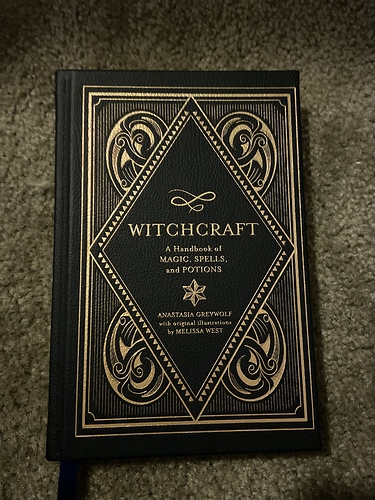 I really do actually it has a different types of Magick and spells from all over the world. Some is just down right baneful too. It’s definitely not a “nice” book.

@Nozferatu I would try a vengeance spell from setheach he’s great with vengeance I have contacted him for that in several occasion and they have always worked. But I would also try Morgane le Fey she is also great with both vengeance and protection . If he in some mysterious way would get help in counter your attacks,

Anastasia grey wolf very nice , saw others books from her while I was searching for a brand book. It’s not an coincident I should get that book,
Did you get it online or did you buy it in a ocult shop ?

Actually got it at an local book store big chain too. Books-A-Millon. They have a huge selection there of books and even tarot.

@Mulberry This is great, thank you!
We live in the same city and my contact with him is limited because of the money. I “tarnished” his name so he swore to pay me back every dime. I have yet to receive a single cent. Does Andras still seem like a good fit?

@Angelb1083 This is truly helpful! I have some books but nothing seems to stand out that can pack a punch if you will. I’ll definitely pick up a copy, again thank you for your help!

@Bordicum He doesn’t have the strength but I do think his fake girlfriend has someone working on her behalf. So if anything, I may need to counter her attacks.

I’ll send you a DM

No, for money try Clauneck or Bune.

Just from being a bit once bitten twice shy, I’d say he’s too close for Andras. The last thing you need is minor car accidents, stuff in your house breaking and dumb bad luck. He’s a bit too good in that department.

Maybe try Angels of Wrath by Gordon Winterfield. Some say Angels can do such tremendous damage that makes even demons look benign… kind of makes sense since it seems Angels understand people’s deepest desires and path in life more? Or so I have heard.
But I’ve heard many good things about that book, some say their most powerful results has come from it.

Well dome peopls owme over, $7000, and i did call barl. To step up., #2 valefor tat clearly saying if i dnt get at least 3 of my money, well tey are not only cursed, but more to door hells, or whatever tey find after tat door, it take 40 days snd trust me i try a lit of spells same whit ok. Results, but im waitng for couple days yet, and i will update you

How did your spell turn out?

Her cousin from chick tat owe me, die 2 weeks later in her 30s a suddenly heart attak. She dnt care anyway… But it was say pay or u family death be ayment. Another guy lost everything and was working at lityle ceasrs restaurant. From 21 a houra to 12.im not done yet, im working on 3 more.

Tat results were in 2 werks. And the economy slowdown. Sp it was bad for them.