Why demons possess people who doesn't want to be possess?

So, I’m new here and I have so many questions. Is it true the “hollywood idea” of demons? They possess people against their will, right? Why is that? I see so many people trying to contact them, so why go to a person who doesn’t want a connection with them? You have experience something like this? What was like?

Hello @G_I! Have you tried to use the search option? It’s the magnifying glass, top right! This question has been answered before by many

Noooo. I haven’t try…still dont know how to use this forum properly.

Can you send me a link, please??

I think this was the last one with similar question

What is a demon possession and why does Hollywood always portray it as a negative thing? Spirits, Evocation & Possession

In countless Hollywood films such as The Exorcist Demons have been portrayed as negative things that can only be removed with the power of Christ. Is this true?

Click on it and type your keywords. The system will show you some resaults automatically. By clicking the “more” option on bottom it takes you to more threads. 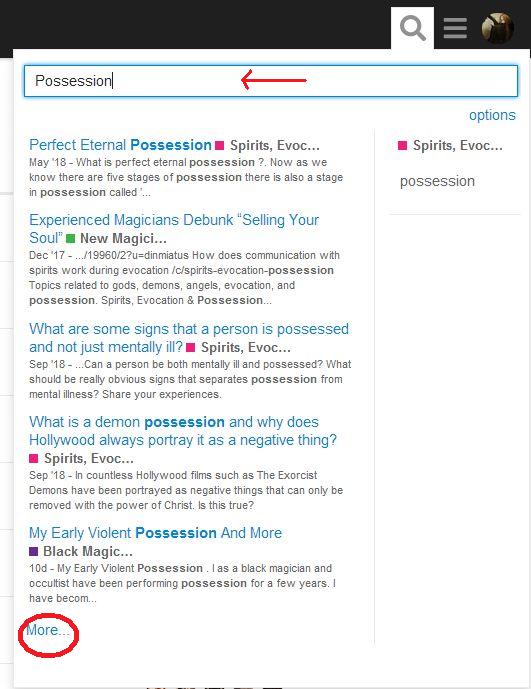 Or, simply type your keyword and hit enter

You are the best!! Thank you sooo much

I haven’t experienced it because I’m voluntarily possessed, but I lived in a room next to somebody it was happening to and I accidentally overheard a lot over a span of about 2-3 years. Eventually she got better, and the demon that was torturing her came to live in my body and radically changed my life for the better. He’s still with me. We even got married. Her nightmare is my idea of a good time. It was very eye-opening.

Why was he bothering her instead of being with me to begin with? She was living a lifestyle that was dangerous for her personality type—she’s very physical, a natural visual artist, and she was doing spiritual stuff like teaching life skills classes about meditation and feng shui. She probably just got in too deep.

That demon also didn’t have a proper person to live in yet (me) because I wasn’t living the kind of lifestyle I should’ve been living either. I had no idea I naturally belong in the spirit world so I was still doing stuff that kept me in my physical body, making me available to humans instead of demons. Since I wasn’t doing my job and being a mystic, this woman suffered.

Those 2 years were about both of us letting go of stuff in our lives that was false for us and unknowingly trading it to each other. Like trading clothes that don’t fit. We both ended up with something better. She ended up being the only person I ever saw leave the homeless system and move straight into home ownership.

I think your story is very educative, thanks for sharing. The mainly reason people is scared by demons is because they “can hurt you” (I maybe in that group). I think the idea of being hurt with “no reason” causes fear in most of us. I’m trying to figth that fear or trying to understand if it comes from a place of ignorance and that’s why I asking, so thank you so much for sharing your story with me!

If you’re not comfortable with demons, you don’t need to work with them, I don’t. The first time I summoned Azazel, he told me that “the blood of my ancestors cried out from within my veins” and to “leave us Jewish myths to the Jews.”

Instead of working with demons, you should work with the pre-Christian pagan religion of your ancestors. Since working with the Slavic pantheon, I have had so many successes and things that are impossible have been done for me.

Don’t work with demons, work with your ancestral deities.

That has so much sense. Where I come from there are a lot of natural deities like The Pachamama. I have tried ayahuasca with a chaman, but never alone. The colonialism in this part of the world has been thanks to catholic religion, so I was upset by that my entire life, but I also have so many friends that consider themselves catholic or at least, practice their catholicism with syncretism with pachamama, coca leaves, “The Supay” (which is the name of the devil in quechua language in the mines, and he is adored rather than hated)…what I’m saying is that I am very curious about demons, especially Lucifer and king Paimon (I don’t know why, I literally don’t know nothing about them, only the things I have read here since yesterday)…BUT certainly I don’t feel ready and certainly I would panic if I would contact them in any way

What makes any of the “demons” Jewish desert owned? Solomon? Pshhh… these beings supposedly predate Jews so they can hardly lay claim to them just because some entitled king used them as slaves. Fucking ironic the story of Jews being slaves then them conquering, murdering and enslaving others. Seems all those Mideastern desert fucks do is fight and enslave.

What makes any of the “demons” Jewish desert owned? Solomon? Pshhh… these beings supposedly predate Jews so they can hardly lay claim to them just because some entitled king used them as slaves.

Most demons are original and originate from the Abrahamic religions, like Azazel and Glasyas-Laboyas, while a few others are loans from other religions, usually Zoroastrianism and Sumerianism. Very few Sumerian gods got a wrap as demons in Judaism and later Christianity, it was more often Zoroastrian demons that were loaned, like Asmodeus.

So, while a few demons do predate Judaism and Christianity, many actually don’t. Azazel, is one of these. And I reject most of the gnosis on this forum about how popular demons like Azazel and Lucifer are present in every pantheon, I reject that idea wholesale. Unless there’s legitimate evidence that a previous god influenced a later god. Like how Aphrodite was developed after Phonecian traders brought their goddess Ashtarte to Cythera.

I had concluded that the hollywood idea of possession comes from the fact we are viewing symptoms and not the cause.

We confuse different causes for one another as they have similar symptoms.

Ps. I havent investigated this theory but it is possible we create thoughtforms naturally(imaginary friends) as children before we are programmed to not,believe in them. If this is true, imagine how many people are tormented by their own thoughtforms later on in life.

Then that makes these beings all man made creative thought forms and nothing more. Creative imagination. If they only exist according to logistics & demographics of said groups then they’re ALL FAKE imaginary egregores.

So groups just “made up” names?

Well, no wonder nothing gets done but circumstance and just random algorithmic situational conditions based on interaction of x,y,z.

Not like these being wouldn’t wear masks or forms and change outfits as civilizations change. And you’d think even if they did they wouldn’t get bored with a few pathetic hundreds to thousand of years considering they are supposedly aeons old. Earth took billions of years to this date and who knows galaxies ages.

And again, I wonder why they’d fucking even bother unless bored. Surely they can’t create life and become life. Ever spirit beings with no physical form must be damn envious and jealous of humans being alive and able to have 5+ senses.

More energy in a sperm & egg than the entire pantheon of gods, angels, and demons combined.

Youre assuming all panetheons to be different entities. They are different perspectives of the same conciousness. Hermes/thoth, zeus/thor, jesus/odin. Always parallels. At some point you start to wonder if they are the same being

I can only go by what other humans evaluate, write, and preach. Of course I don’t trust a single word on philosophy that any tome or person demonstrates and elucidates as fact. Can you really trust the words and works of man in this area?

If spirits are about can you trust them since mankind is the way it is? Man and spirits have agendas and I seriously doubt it’s this bullshit of making individuals ascend. I can see them using spirits and people just like people use people for profit and gain.

The only thing we have as living beings is life. And these egregore human wannabes can’t EVER have that.

Demographics, logistics, and perhaps what’s popular which really fits into both of those again. Boils down to power to control something and the profit to be gained through that. The bs fluff mind shit is just the spin and product to be sold to those who eat it up. I begin to be more and more convinced on this as every flim-flam snakeoil salesman peddles product in hype to their target audience.

Then that makes these beings all man made creative thought forms and nothing more. Creative imagination. If they only exist according to logistics & demographics of said groups then they’re ALL FAKE imaginary egregores.

That’s not what I said, I am a true polytheist. I absolutely believe that the gods, spirits, and others are real and living beings. Just that how E.A. has discovered demons and angels in no grimoire, the demons and angels which are original to the JCI current, were discovered by the sensitive souls.

Youre assuming all panetheons to be different entities. They are different perspectives of the same conciousness. Hermes/thoth, zeus/thor, jesus/odin. Always parallels. At some point you start to wonder if they are the same being

See, this is something that I heavily disagree with. Similarity of function doesn’t imply similarity of being. There’s no way that Odin and Jesus are the same being, I’m not going to dignify that. And if Thor and Zeus are the same god, where’s Thor’s extensive list of illicit affairs? At what point did Thor overthrow his father to become the chief of the Pantheon? Where are the ideas of a world tree and the nine worlds in Greek mythology? Thor is the God of warriors, but Zeus is the god of kings, why don’t they have the same associations? Hermes and Thoth are the only ones who used to be associated together.

They possess people against their will, right?

Some possessions are voluntary and some aren’t. The reasons for the latter may vary. Sometimes it’s to get in contact with someone else, and sometimes it’s to punish people.

They punish people on their own or because someone has told them to do it?? (like a magician, for example?)

I believe the stories of those gods are allegories. So the stories will have paralels but obviously they arent all the same.

When i try to explaim things to kids, i use an anecdote. I believe the stories of the gods to be the same. They didnt happen, they were stories written to teach a concept. Allegorical