What's the difference between the "left"path and the "right" path?

Middle is totally me

which would make the Big Bang the very moment of its final initiation into the eleventh sphere. It’s also interesting to speculale as to the nature of this eleventh sphere, which might not be spherical (at least as we conceive it) instead taking on the topography of an Eienstein - Rosen Bridge (wormhole) with the black hole being opened up in the prior / parallel universe and the corresponding white hole being the Big Bang singularity in ours.

Those things don’t exist from what I’ve learned.
The Electric Universe theory makes more sense and matches what we see in Physics, Parapsychology, brain waves / consciousness and in my hypothesis magic.

Remember “If you want to find the secrets of the universe, think in terms of energy, frequency and vibration.” - Nikola Tesla

Watch these for a new interesting perspective in cosmology and how the universe works, or when your bored.
It explains everything.
Follow the rabbit…

What’s really at the center of our Galaxy:

Excerpt from the link

"The vaults of zin, and the correlation between the qliphoth and the forbidden tree.
The vaults of zin for most is merely a legend. An obscure labyrinth beneath the qliphoth. rarely spoken of, or even elaborated upon. Some say they have been, others have never heard of such a thing. A system of tunnels, that can be accessed through the tunnels of set, so intricate and complex, you will be lost within the maze without a guiding spirit. There are specific spheres and pathways that will take you to the forbidden tree, thaumiel is most logical, as well as the most dangerous entrance to the system. Thaumiel my most recent obsession, I refer to it as the god sphere. The qliphotic equivalent to the god-head, and through thaumiel you can experience the qliphotic tree from a God’s point of view. "

I am not currently trying to explore this but i follow the stuff on it cause it interests me. Working on understanding the current map i am working with has me busy enough:laughing: 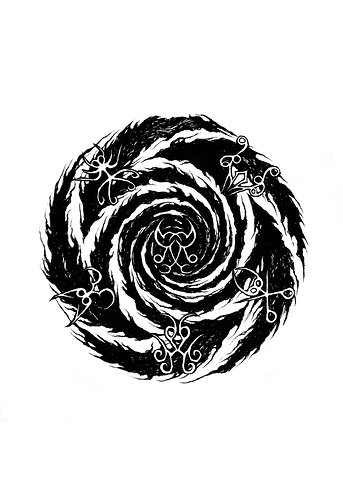 I think we talked about this before, you and I. Some interesting perspectives here.

Heh, yeah, I edited my post after I saw the articles in addition to the picture. Interesting stuff for sure.

I’m not sure what’s the difference between them or hell what they are. If you know please tell me.

I defined how they are often used and how I personally use them here:

In the past few days I’ve seen a lot of conversations and crossfire on here, about why people identify with the LHP, why LHP people don’t like RHP people (and, of course, vice-versa), so I wanted to put some definitions up here, because I think a lot of the time people are talking at cross-purposes, or simply not understanding what a person like me means when we say we embrace the LHP & actively, passionately, shun the RHP. This isn’t to lay down the law as to what people can mean when they say…

Those things don’t exist from what I’ve learned.

But thanks for the videos! Am always open to falsification as any good scientist should be!

Man, I think there is atleast few dozen of threads explaining this exact thing. If you really want an answer, go through them first (no disrespect).

One way I learned is:
RHP: union with God
LHP: become God

This is what RHP/LHP has become, although the historic origins of the terms refer to something different (more in line with antinomianism than one’s end game necessarily).

One way I learned is:

RHP: May God’s will be done

LHP: I am God, may my will be done

This is what RHP/LHP has become, although the historic origins of the terms refer to something different (more in line with antinomianism than one’s end game necessarily).

@Angelic They are fundamentally different. Right hand path people seek to “merge with The Source”, even if “The Source” is the universe itself and not an actual Deity. They largely seek a more mystical experience while accepting things as part of a divine/universal plan of some kind.

Right Hand Path (myself included) seeks to bend the universe to my will and not to merge with source. Although I and others use benevolent and malicious magic, we do not see ourselves as an “agent of God(s)”, but rather as the Master.

@magickmike you seem to understand this quite a bit I have a odd question for you. What makes the two “paths” SO different anyways? No one has really explained why but rather how they are different now if it’s the type of magic used I could understand that.

Warning…Side note: I really think that “LHP=Create The Rules” a fundamental place where personal evolution begins. Everyone else (sorta) in the species repeats the norm and the same method…then you get those that realize that it is their duty to create the world as they see fit. Right and Wrong are subjective to the Creators’ wills. Then the transformation really starts to happen.

@Angelic see my answer in the post just below your last reply to me.

Do you know what happens if someone does both paths?