I figured I should make this thread to keep you all updated on basically the “aftermath” of the void meditation that @AdamThoth made. (It’s fantastically done, by the way!)

First of all, I didn’t expect this major of effects. I wasn’t in too much of a deep meditation, but this really helped a lot. After I finished, I was zoning in and out of a conversation entities were having. All I remember is one entity basically saying I’m not ready yet, but the other is all for whatever it is.

I was in and out of this vision I was having. All I remember is feeling surrounded by spirits and being held on both sides. One kept asking me if I was fine and all that jazz I kept getting visions of me throwing up too, and I almost actually did.

Lastly, they basically said “Be careful when you go to sleep tonight. We can’t do anything but warn you.”

If any of you would like to add insight on the meanings of this experience, It’d be appreciated.

I’ll keep you all updated. (I’m gonna head off to bed to face these nightmares I may have.)

There are two energy pathways in the body, a positive and a negative and they do work together. Thats what I got from this.

The stuff below is a formal take on this, from traditional Indian understanding of the energy body - when you begin doing magick, especially black magick, your energies may change slightly, but it gives a starting point for understanding these currents:

This is also worth reading: https://www.yogajournal.com/yoga-101/balancing-act-2

Okay, thanks. I’ll definitely read them then.

All that has happened was me having freaky nightmares. Suspiciously enough, nothing else has happened, so maybe I should try the meditation again. You know, just in case.

I tried the void meditation for a second time. I seemed to do it quicker than the first, because it felt like second nature. The side effects weren’t as bad as the first, of course. I only felt slightly off, so it’s not too bad.

I was able to start to see with “my third eye” a little bit. Every time I focus on it, I keep seeing this shadow entity. It’s focusing on me as much as I focus on it.

Quick summary on this entity:

Now that we got that over with, I’m betting that if I do the void meditation a third time, I’ll be able to somewhat pick up on what he’s trying to tell me. I’ll surely update you all on that, if so.

Try entering the void with the intention of seeking more information 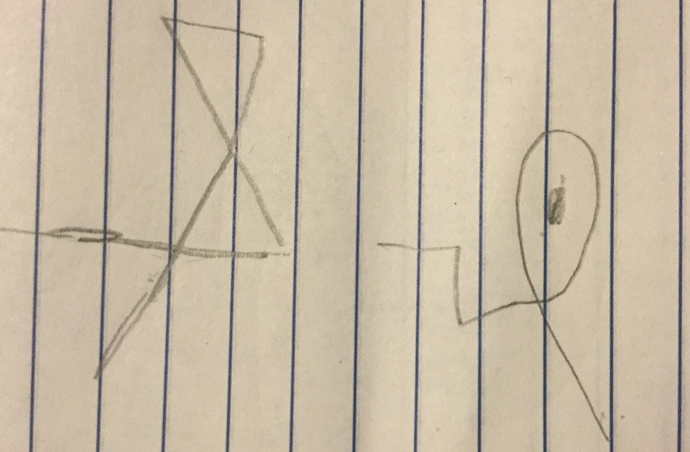 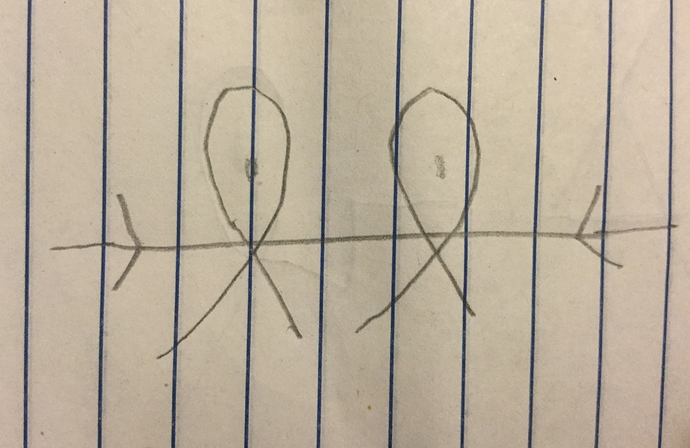 Okay, I just did that, and here’s what popped into my mind. I have no idea what they represent. I’m not sure if they’re accurate enough, and excuse my poor drawing, lol.

There was someone else there with me. They grabbed my right hand and pressed their thumbs on the center of my palm. After they did so, it was when I was able to process those images a little more clearly. The entity told me that I’ve been marked. In order they pointed to my forehead, my stomach, and then my right arm. They repeatedly did this like it was really important I remembered the exact order.

I’m not quite sure what this all means, honestly.

Welp I more than likely helped uncover something.

Yes, thank you so much. Now all I have to do is research sigils and to see if I can get an idea what they mean.

But if anyone has any opinions on what they think those sigils mean, I’m all ears.

I suggest divination at this point. Keep pressing for answers, respectfully of course.

Alright. Also, now I’m slowly getting answers. The entity that’s giving me some hints says they can’t help me much. Now I’m picking up fear off of them and I keep hearing the phrase “I can’t help you anymore!”

It’s that typical “I’ve said too much…” scenario. I’m not sure if I picked up correctly, but apparently some other entity might have made sure I’m not able to really “open my third eye.” The entity with me tried to help a bit with that.

These experiences I’m having are rather intriguing…

Or you’ve stumbled upon an imposter.

I did the void meditation once again. I tried to relax even more than before. I lit some candles and turned on some music I love. I tried not to rush the meditation.

Next thing I remember is almost actually seeing an entity for once. If I’m not mistaken, they seemed more masculine, and I know this may seem ridiculous, but he seemed like a king completely. They had a cape and crown. I don’t know if my senses didn’t pick up correctly or what, but he seemed huge and tall from my point of view.

He told me “Take my hand.” So I did. He said to basically just imagine any place I’d like. I did. A place that I don’t know if it actually exists, but a place I imagine to relax myself sometimes. All of a sudden, we were there, but of course I couldn’t see it all well. My senses are still not good, but boy did I surely try to completely see everything.

Then he said some things, I honestly can’t really remember, but he said “Come with me and let’s follow the wind.” So I basically said “So where are we going, and what am I supposed to focus on.” He said we were just walking around. I figured it was no point but to just do what he said and “follow the wind.”

After that, he just had me try my best to see the entire place we were at. I said “I can’t because my imagination may get in the way…” He told me not to let it hinder anything, but to let it fuel me. I hesitated. So he was like “What was it that nickname you were called?” He them started to smile big. What he was mentioning was a nickname an entity in a dream called me. It was “Mrs Bohemian” and the second definition was a synonym to “free spirit.” ((I posted about this in the forum That Moment When))

I kinda shyly said “Mrs Bohemian…” He looked at me and chuckled. Seemed like to me he had a real good laugh about it. He told me to basically be like that. Well, what I thought it meant. To just be a free spirit - let my imagination run wild, so I did. I slowly started to see things little more clearly, but not much. I started to panic because I started to stop seeing things.

Next thing I know, we were back at my house. I don’t know what else happened, but I think he went after someone? Then I remember him looking at some marks on me and he went to try and smudge them up. When he did, he basically said I don’t have much holding me back now, but then he suggested I take a break now.

Sorry for the essay, lol, but this all seemed important! I would like to hear what you all think of this crazy experience I’ve had.

I don’t like jumping to conclusions, but after these experiences I’m assuming the shadow entity, that I saw before, marked me for rather harming reasons? Probably for their own selfish reason. The entity who came off as a king, that I saw today, probably was only trying to help counter the negative effects the shadow entity brought upon me.

Well, this is what it seems from my point of view.

Hmm. Who do you work with?