So just did a super vivid scan so I decided to see where my sweetheart will take me I stopped at the beginning of the scan once she was leading me by the hand through folliage having to move it ouvof the way to get through. Warning we had a really weird night and was crying because of her before we started this.

Every period is where I stopped to record what has happened.

Lilithexandra, Ishtarith, Mirandith, Lexith, and Belatrix. 5 brutally fun and romantic succubi that have been in my dreams over the course of 20+ years or so. No two dreams are ever exactly alike. All 5 of them are either dominant or switch, never 100% submissive. I’ve gone to sleep and woke up at strange times of the night hornier than a jackrabbit on ginseng. The insight that they have each shown me during sex magick rituals borders on levels that don’t seem humanly believable even by my standards, which says a ton. Feel free to pm me on details.

I wish I knew how to differentiate from “what I want to happen“ to “what is actually happening.” It just seems like an imaginary friend who I fantasize about to find comfort in.

So I figured I’d share some experience with Lilith.

I can’t feel her yet, so our sexual encounters are mostly visions, but months ago while I was away, I was getting bored so Lilith gets sent to me, she opened her legs and struck sexy poses hahaha

Glad to see I’m still having a positive impact on this side of the occult.

well my thread is. Yall are the real positive impact here tbf

Thanks for tagging me, Dagar

I am going to read you and I am sure I can contribute more than one anecdote!

Yay.! I’m excited! I’ll be looking forward to it!

I have sexual encounters with a demon every night. I have never seen her/him/it physically during any of them - but the levels of contact are always very strong and focused. Feels like bio-electric probing in and around my genitals. The only name I can perceive is “Several” which explains the varying types of stimulation.
I would appreciate it if someone could scan me and provide some more details.

You can request a scan on the scan thread

One of the most fascinating things I have seen in an incubus is something I did not expect at all: its healing ability. both incubi and succubi have magical abilities that can be developed and multiplied. The energy they use to heal is transmuted sexual energy, but if you don’t see any problems with it, it works great. Zero draining sensation. I recently had a very bad cold (fortunately Covid negative) with a throat infection and fever at night. The meds did nothing and it got worse. Well he was taking care of me all the time and instead of absorbing energy for his own nourishing, he used it for healing. Afterwards he was quite tired, so we had to balance the energies back, you know.

On the other hand, I wanted to comment on something that is not talked about much. I have always read papers about how sexually accommodating the lilitu are. But did you know that they have their own fetishes and sexual fantasies? Just ask them, you may be very surprised.

Hey friend! I made this thread specifically for succubi abs incubi related stories. I think it’s really cool that those two were like that for you, however, please do your best to stay on topic from now on okay?

I guess I have one to share in a similar state. Been a while since I discussed these topics after finishing my sex magic works a while back. So as of recently I went through the process of contacting mother Lilith to thank her for the amount of progress my Clairaudience that has been actively expanding on much better terms. I find that plenty of my grounded meditations have come into contact with random voices that I’ve been hearing faintly more and more after reaching my maximum trance abilities falling right down into the depths of my mind as my visualizations can get hectic at certain times. It turns out the voice I’ve been hearing was one of Lilith’s daughters who I’m very familiar with. What I consider one of my demonic guiders in my spiritual path.

Apparently she’s been secretly testing me to see if I would notice her in my space where I have my hidden gatherings of Lilith’s altar and related items or offerings I have for her. Lately as of last week I did a 2 hour long Kundalini session from the journals when I heard something along the lines of just face foward with probably the most delicate soft voice I ever heard in a while. Didn’t give it a much of a thought at all as I was alone in my grounded space as always. Was apparently not. She expressed to me that she was upset that I didn’t catch upon the sign Initially at first.

What kinda concerns me about her as an entity is that this is the many few times she’s visited my place without me using the sigils that I have for them to use and call upon them and ask for assistance. It is one of my rules I have to only visit when I call upon using their sigils. Usually most of these entities I have contact with are busy in their own and only contact if one has the time to stop by. There is one by the name of “N” that gets a bit agitated if I happen to contact her at the wrong time and threatens to haunt my stupid ass If I keep reapting these mistakes, lmao. She is part responsible for how well my clairsentience is open now today so I knew she was only messing with me in way (hope so tbh) She’s on the more darker side of aspects but still secretly has a sweet side that’s hardly ever noticeable due to being a strict teacher/guider. There is far too much that we don’t know about these entities other than the cliche nonsense that’s been placed upon them. The amount of things they can achieve with ones power and dedication within time is remarkable.

I think I do need to still clarify what intentions my other has for me. She is in no way a malevolent entity far far from it and even expressed how protective she has become with me but likes to stick around more than I would want as I don’t usually allow for long visits more than what I do in regards to my practices. The issue here for me since I don’t partake in any sexual activities she still goes out of her way to keep me company when she wants as I do know that she expressed that she has fallen for me which to me is a red flag (in a small way I guess) Once your body opens itself back up with its senses to the other side of the hidden tunnles your energy around gets hectic which now explains why my tranced visualizations were all over the place Initially.

-I actually need to work on that. Take control and ease down my visualizations when reaching a full trance since it I noticed it can hinder me from fully progressing further. Lol, how am I only just realizing this? An obvious sign since I didn’t listen to her at first. Makes sense now. Almost as if Lilith sent her herself during this time period. Guess I’ll work on this for another journal log-in. 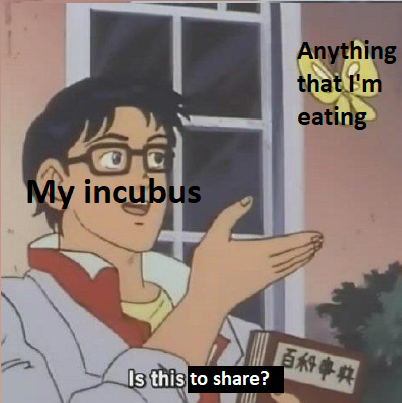 I know this is an old post, but it made me laugh so hard because it’s totally real. I wonder why they would like human food and drinks so much. I guess because they are so curious and interested in anything pleasurable in general.

the real fun begins when you’re half asleep

I wonder why they would like human food and drinks so much. I guess because they are so curious and interested in anything pleasurable in general.

This can also fall under the bonding process with them if you have a relationship in between. It’s similar to offerings given to entites your working with the only difference being as a sign of respects to said entity. The biggest thing I recall with Lilith’s offerings was that she appreciated my offerings of Red Wine (my personal favorite) and Black coffee (which I’m addicted to) but who the hell cares since busy mornings suck as they already do enough. As an example one of my ladies from my OP post above loves when she gets a share of my toast and coffee as its one of my simple favorites before work. The many things they enjoy with us are upon categories of activities with them that are vastly various. I would have never thought in a huge light year that an entity would ask me If we can take a walk to the nearby park since the weather was beautifully sunny/cloudy outside or keep me company while out for an early morning jog (days off). Just about everything that we do on the daily they possibly can find an Interest in. It’s as if they adapt perfectly to the lifestyle that one has.

This can also fall under the bonding process with them if you have a relationship in between.

In your case do you make a food offering or do they fronting through your body? They do mostly front, right?
It’s fun because they can even get to like the more mundane foods. But I’ve noticed that they tend to like pleasurable or comforting foods and drinks.

I would have never thought in a huge light year that an entity would ask me If we can take a walk to the nearby park since the weather was beautifully sunny/cloudy outside or keep me company while out for an early morning jog (days off).

That’s right. They also tend to like nature a lot. Even sports. Let’s say they like serotonin, also very present during sex.
It must be very boring to live in an obscure pre-existing state, so when they meet a human they like and bond with, they take the opportunity to live and experiment.