Remember ancient greeks used images (statues mainly in their temples) to work with their deities
you can try using ancient symbolism as it works as well but as I wrote before, trying to contact them with symbols is like contacting with a telegraph instead of a telephone, a more efficient way is trough image.
different from the 72 goetics they work better with literal representations, as for the 72 the sigils works better and images are less efficient, hellenic gods works the other way around.
As to answer to your question, you could try ancient symbolism, but not such as sigils, more like objects or animals, that are in someway connected to their story, for example for Hermes, you could use as symbol a tortoise or a stork, if you dont want to use a image of the God you could use a figurine of one of those animals to connect to him but as I say before it might be not the more efficient way, at least at first.
As to contact apollo for example (God of oracles between other things) you could use a lyre.
so you see the symbolism is not as abstract, so to speak as a sigil, but more literal connected to their own stories.
as to do a research online to search for the myths and the symbolisms etc, I would recommend the web site theoi, as I wrote before, is a good way to understand the story around them, so you could search for objects animals plants etc around their myths, which can be a way to connect. remember there are things who were highly connected to the ancient Gods in antiquity, as for example owls to Athena, so if you don’t want to use the image of the God or Goddess you want to connect with, search for the things wich were sacred to them.

I like Hades too as a person in a way.

Anyways give him my regards and if you meet him tell him the job he is doing is one of the hardest but because his inside is a good soul he has the ability to do what he his doing.

And say hi to Persephone from my side and regards to his family.

well on that dark note, how do summon him and please him?

so I cant give you much advice on Hermes . Although if you ever feel stuck at a crossroads . She is a wonderful goddess to pray to & worship. She is making me into a strong woman who will one day be by her side in the underworld

Welcome @Christopher_Elliott It is a rule of this forum that all newcomers must properly introduce themselves, so please click the link below and tell us about yourself and any experience you may have in magick:

I wonder if it would be possible to evoke or summon a Titan like Rhea or Cronus/Kronos, or a primordial God like Ananke or Chronos, or Khaos/Chaos. It would be interesting.

hi, i wanna contact eris, but i wanna know if an apple can work for the contact plus her image?

or a primordial God like Ananke or Chronos, or Khaos/Chaos.

They feel more heavy and might be a bit more tough but it’s also possible.

i wanna know if an apple can work for the contact plus her image?

It can work just fine.

thanks, have u work with eris and/or other greek gods? how u made the contact?

I have worked and I’m working with Greek gods, I’m Greek and I’m involved in several ancient Greek reconstructionisms orders. Though they don’t know about my dirty little LHP secret. It’s just natural for me to make a contact with the Greek gods, as natural as breathing, since even during a normal walk outside you can come face to face with ancient temples and spots of power.

there’s a form to know if im being contacted?

A form of Eris you mean? As how she appears? She can take different forms, either a very beautiful woman, a (not so beautiful) woman with a hunch or limping, a snake with wings or a woman with wings and snake tails for feet.

If you mean how can you know if she contacts you, my advice is to call the feeling of anger and jealousy inside you and from there call her. You’ll know.

also if i have mischeivious thoughts or feelings?

No, Eris doesn’t represent anything mischievous, she’s pure hate, jealousy, anger and fight. Some say she’s a daughter of Ares, accompanying him and his sons in the battlefield, so you see where this is going.

ok, so i can call her with hatefull feelings or thoughts

Yes, exactly. Gold and black are her colours btw.

thank, ur wisdom is great, you should make a greek gods thread for contact them, i aslo wanna work with hebe and aphrodite what u recomend for wor with them ?

Thank you for your kind words.

Hebe is a secondary diety, she represents eternal youth. People don’t have a reason to call her usually as her role was pretty much that of a servant or, better to say, a typical young daughter who takes care of her older brother, obedient to her parents and especially her mother, being a good hostess serving her family during gatherings, marrying the one her parents chose and being a happy girl in general. I suppose aside her image you can use whatever objects bring “youth” in your mind.

As for Aphrodite, for personal reasons she’s the only one I’m refusing any connection with. You can use her Orphic hymn and you can also find several threads or posts here from ppl who worked with her. 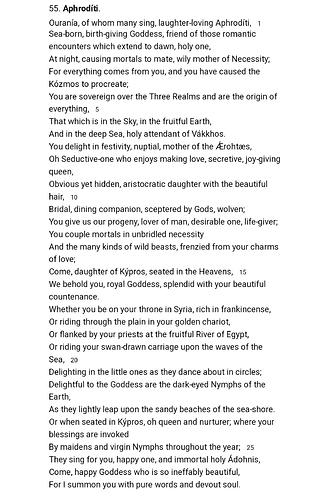 ok, thank for your wisdom, im going to reseach more before make any contact
also for hebe could work a goblet?