I found this strange doll in an alley near my home, strange things have happened, I am not sure if it has been used ritually or not, it appears to have an old metal pentagram attached, opinions, can someone scan the doll, what kind of aura, Voodoo, Hoodoo? 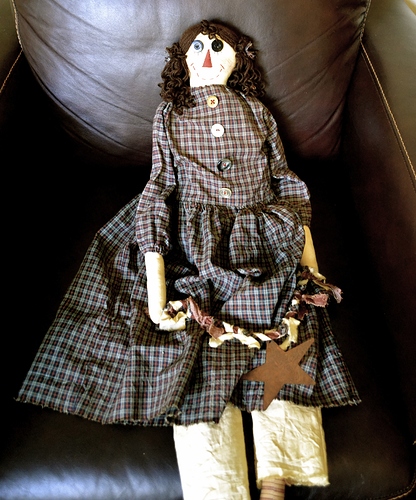 I wouldn’t have picked that up lol

I’d set it on fire. Cursed objects - it could have been voodoo and someone just decided to dump it somewhere so he/she wouldn’t undo any curses they’ve done to someone. Maybe it’s just a homemade doll, that’s probably it.

I wish I could do scans. Just a few opinions.

Man it scares the hell out of me
Why did you bring it home? Who knows what has been done with it

I would scan it for you, but my senses are disturbed by how disturbing is that thing

What do you mean by “strange things have happened”?

That thing is more a star than a pentagram, if you ask me. Just a conventional five pointed star. I wouldn’t directly relate it to some kind of witchcraft. The proportions are unsettling, but that’s about it.

In any case… kill it with fire!

… kill it with fire!

Also… are you sure you are telling the truth about the origin of the doll?

In any case… kill it with fire!

Looking over all the comments, holy sh$t, it is already gone and will be in the dust bin today.

Yes I live in downtown area of L.A. and it was by a dumpster behind a thrift shop. I did not create it or have it made but I thought it might be a cool item but I think I have learned a lesson to leave things alone when you are uncertain.

Looking at your comment about the star vs. pentagram which has rusted over, I am almost tempted to clean off the rust and wondering now if it has any symbols engraved in it. But I will burn it.

You could probably sell it on ebay as a haunted doll. You know, share this wonderful discovery with someone who will give you cash for it.

Actually, it looks like a type of object I would be likely to collect. Chances are, based on where you got it, it was likely tossed out because it was in the shop’s inventory for too long. I do not get the cursed vibe, but I do sense it was created to ease the suffering of another who was at their breaking point, soaking up all that sorrow and anger like a sponge. A good battery

LOL! You mean like the guy in Oregon you had the dybbuk box or dibbuk box which is said to be haunted. A dybbuk is said to be a restless, usually malicious,believed to be able to haunt and even possess the living. Now there in dolls, I think I will get rid of it.

Lol right. Before 2000s, no one ever heard of a dybbuk box, as it does not exist in Judaism or any of the other Rabbinic texts. Unfortunately, I doubt an Ibbur box would sell just as well (Ibburs are very benevolent spirits that can possess people, pretty much an opposite of a dybbuk).

@lawclerk well now entering the topic and seeing the picture i know whats going to haunt my dreams tonight. Lmao

You’re right, this is something I have researched as well. Dybbuk Box or demon box does not exist. The term Dybbuk Box was coined by a man named Kevin Mannis a furniture and antiques dealer from Portland, Oregon who purchased a wine cabinet at an estate sale.

Mannis a publicity hound and merchant and wanted to make money off his finds and fabricated many events dealing with the wine cabinet. He went to several local newspapers regarding the box who published extensive stories on this supposed possessed wine chest. They eventuality made a movie The Possession from these articles.

This demon box is not haunted or an attached object that a angry spirit chose to hide in but a preternatural booby trap from a Witch that wishes to protect her small ritual ALTER used for Witchcraft.

From Mannis’s account the artifacts lifted from the box it appears were objects used for castings for health, healing and attraction spells, that were performed, hence the locks of hair, an old red rose, and the ritual implements used for the casting.

Stones were found inside the box inscribed with “Shalom” are offering stones. A wine cabinet was symbolic because it signifies rich fruit and fertility. The prior owner also placed a protection casting on the wine cabinet to protect there sacred altar.

It seems the victims of this Alter have all the information to solve this but have missed many crucial points and by overlooking the obvious they are not able to solve this mystery of an old wine chest that was used as a alter for ceremonial magic. This has nothing to do with Poland, W.W.II or the holocaust, or Havela (the original owner) but everything to do with Witchcraft.

Everything also points to the original owner of the box to being a Witch, she held séances and performed necromancy, she summoned demons for devination and prescience.

It is obvious to me that this Witch was heavily involved with a demon known for love and lust also as being extremely malevolent Asmodeus (Asmodai). All the signs are there his trademarks are a strong cool breeze or wind as he is the demon king or gate keeper of the east. East being the eastern hemisphere of the globe, the element being air.

Mannis unknowingly was trespassing on sacred ground and disturbing the ritual alter space of a powerful sorceres.

Mannis’s visions or nightmares confirm the demonic attacks. He had nightmares of a woman in a black cloak is symbolic of the Witch that Asmodeus was in league with, when the victims had broken that trust when he had broken sacred ground with unlocking the ritual alter box, unleashing the demon who has now changed from a trusted friend to a hag of destruction.

LOL! You mean Annibell the large stuffed doll in the Warrens’ Occult Museum in the back of there house in Monroe, Connecticut where they display artifacts from there investigatoins.

The doll is supposedly demonically possessed. The Warren’s keep the doll behind closed glass with a warning sign don’t open, don’t touch. They have a large wooden cross over the case to keep the demons from escaping. I never knew you could bind demons with a glass case and cross. Will this hold them indefinitely?