A medium told me that for love spirits other than goetic ones should be preferred because, in addition to the astral and material plane, a spirit is needed that also has access to the Devachian, spiritual and mental plane.
I would like your experience with Goetic spirits, if they have managed to find a soul mate, or if you have had to turn to other spirits, such as the planetary ones of the Armadel such as Hagith.
Thanks in advance for any replies and I apologize for the English.

Sounds like a personal opinion, but it’s not borne out in the experience of myself or the people on this forum.

Remember that Goetic spirits are a mixed bunch including gods and angels, with the only think they have in common being religious propaganda from a very specific group, that doesn’t limit them in any way. It does limit your thinking if you let it.

Zepar is good, Sitri, Paimon, Asmoday, Amon… we have posts on here with people thanking spirits for successful love spells, and I’ve never heard this be an issue.
E.A. Koetting has multiple experiences and a book out about love magick, based on years of successful workings. Maybe read around the subject a bit more before taking one dude’s biases on board.

I don’t think you should take our word for it though… but I would say be super careful of the doubters and the naysayers. Never limit yourself based on what doesn’t work for other people… they are not you, and the one thing that will kill your magick the fastest is doubt. If you think it won’t work, that is the same as doing magick against your own working, and you reduce or negate your results. Don’t listen to people who try to tell you what to think, try it and see for yourself.

You can read some stunning success stories in this location and a massive list of thanks here.

For me, I don’t do love spells, but I am this week for out MFWB group, and I’m calling some of those listed above, all Goetic. I have zero doubt that this will manifest, because it already did, I can see it, we just have to wait for the timeline to catch up

Heartfelt thanks for your detailed and comprehensive answer!
The medium in question comes from Kadechist spiritism, by which she is certainly influenced. She is a very kind person, generous and respects the opinions of others.

For love I had thought of Sitri, but I thought of checking the availability of this and other demons, before making a decision using the occult tarot of Travis. What do you think?
Thanks again for the valuable advice and teachings

It depends what you want do, as there are many kinds of love and everybody has a certain taste and style.

Zepar, according to Corwin Hargrove in his Goetia book, Goetia Pathworking which is my personal fave for working with the Goetia, has this skill, which brings a more romantic and loving connection and attracts a new person: 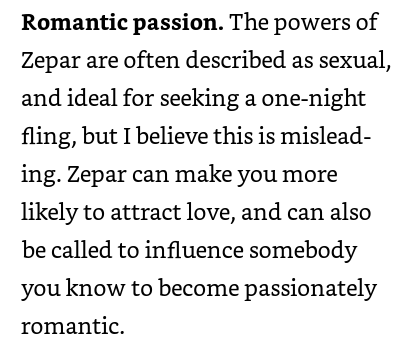 While Sitri is more focused on just the sex side of sexual passion and helping you appear more sexually attractive in general, and making things wilder with an existing person. 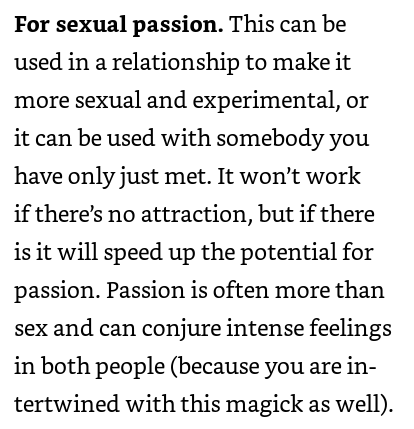 May I ask you why (if I have understood correctly) do you prefer to work with goetic spirits? Is the reason attributable to the accessible method set out in the book you pointed out to me?
Thanks for your possible reply.
I also address the question to other summoners, to find out why they prefer Goetic spirits to, for example, planetary ones like Hagith.

I don’t have a preference. The original question specifically asked about Goetic entities that’s all.

Like humans, I take all people as I find them.

I don’t think it would be logical to draw lines for no reason other than some random dude in the past made a list.