Today i felt something around me a building pressure of a potent yet familiar power.

I knew who it was … It was Shiva … so i sat before a mirror kneeling on a pillow back straight a yogic posture used to contact shiva.

So i vibrated " Om Namah Shivaya " while focusing on his energy around me.

Then i placed my hands in the prayer mudra above my head pulling indigo light into my being.

Then i felt something wrapping around my neck the serpent of shiva, then i opened my eyes and looked into my mirror, i saw the petals of the power eye, i saw the solar force and lunar force becoming one.

Unleashing the power eye, then a pressure and three clicks was heard then from my ajna chakra shiva spoke.

Shiva - Huh here we are once again …

Me - Why have you been around me ?

Shiva - To get your attention …

Shiva - Your so full with questions, you and every other magician out there

Me - Then what is it and why do you call it power eye, while others call it third eye or ajna ?

Shiva - Because it is more than an eye, when i was in slumber in the darkness for countless time meditating i opened my power eye and destroyed all universes before me this is just a taste of its power.

Me - Yes why though why use it for the purpose of destruction ?

Shiva - I’m not just a God of Destruction i am a beacon of transformation, for destroying your reality, until all that is left is the sacred ash, from the ashes your new reality shall rise like the phoenix from the ashes.

Me- Okay tell me more about this sacred ash ?

Shiva - When you worked in that dark current known as Ahrimanic Sorcery, when you peered into drugaskan, creation was ash correct ?

Shiva - This is the sacred ash, The Divs and Ahriman are demons Vedic Gods as you know

Me - So why are you telling me all this Lord Shiva ?

Shiva - Because this ash, can also be a fetish rub it upon your forehead in between the brow and it will awaken the true power eye.

Me - is this connected with the infernal dragon energy pathways i discovered ?

Shiva - Yes, i shall give you what you need to create this ash and then share it with those who need it, let them know the truth of the indigo light, for it is more than a mere spiritual organ, it is Pandora’s box, for it holds the power that shall even destroy gods.

Really revealing, this helps me to understand why in many ancient cultures, about the ancient oriental cultures, much emphasis is placed on the third eye. Excellent work brother.

This reminded me of something I wrote a few years ago!

I saw a symbol or sigil during Shiva meditation, is there any sigil related to Shiva so I can compare?

Also is it possible to get a sigil from Shiva for any purpose?

Hey brother can you help me with shiva sigil I love shiva I want to invoke him.
can you help

If I remember right they use mantras not sigils, however, once a person gets in contact with said Deity they can request a sigil or make one themselves and ask the Deity to empower it.

Thank you for your comment dude I’ll look for diety

For Hindu deities, they meditate on symbols known as yantras. Here is Shiva’s: 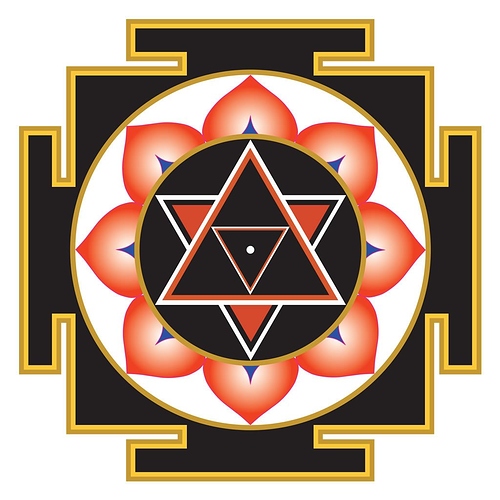 Can we do tratak this yantra to feel energy
Is this channeled yntra ?

No, the yantra is not channelled, it is traditional.

I don’t see why you couldn’t do tratak with it, though that technique is usually done with a candle flame.

@C.Kendall Will you share about how to prepare the Sacred Ash as told by Shiva? Thank you.

well how is that ash created?
i guess i cant just visualize that ash and rup it on my forhead, or can i?

I read that you can also use a white dot on black paper or a black dot on white paper so maybe that’s the purpose for the white dot on the yantra?

Aside from the obvious imagery I enjoyed gazing at this thing, hit download immediately.