Right, so @Keteriya recommended I create a new post to see if any of y’all have any additional ideas on my persistent incubus/parasite.

Hi, I’m Rabbit. Came here mostly resigned to finding more of the same ‘you’re SOL’ when it comes to parasitic incubus attachments/possessions. Casual hedgewitch from time to time when I can no longer ignore the visions and flow of things around me. Only good(?) thing about the spirit parasite is it’s deadened my senses to an extreme, though that also means I can’t raise energy for spellwork and invocations. Nothing like trying to banish something when you’ve lost your ability to channel/gather e…

About 20 years of casual witchcraft (so, maybe 5 actual years’ worth of experience really sprinkled about), mostly from the USA. Not particularly religious - the gods have a definite Feel to them but I’m not much of an acolyte. I actually tried your Luna servitor before even posting - didn’t do much except kick the parasite into high drive in trying to get my attention. Parasite itself was a dumb, dumb invite I sent out to the void in my early 20s - it appeared pretty much instantaneously, so I…

Further details: I did a self-created ritual to invite an incubus into my life. It appeared pretty much instantaneously, causing cracking sounds in the walls and tiny quiet snaps in my ear.

Initially it was great - lovely strange inhuman sex penetrating where no physical penis etc could ever actually go.

But within weeks it stopped being lovely, and I began to get a sense that there were multiple beings involved, fighting over me. (Like I could feel them shoving/slapping at each other while hovering over me, it was very odd) Communication went from great to nonexistent - nothing I said seemed to result in a change in behavior nor garner a consistent reply in the cracks/snaps.

My ability to gather energy from the air around me plummeted into nonexistence, my meditative/trance abilities vanished. The few times I was able to go and talk to my old contacts - various deities - they all looked at the thing attached to me with undisguised disgust.

After two years of trying to make it work, I gave up and pretty much fell to mostly ignoring it because banishing didn’t work, and everything I read said ignoring the thing(s) was pretty much my only option and that maybe it’d go away.

It never really went away, consistently petting my crotch whenever I lay down to go to sleep. My life has gone to hell in a handbasket in the last ten years, and I hadn’t honestly attributed my many, many personal disasters to this being’s influence, but it certainly hasn’t helped the way a loving incubus would, so that’s a sign it’s not at all what I had intended to invite into my life.

A deity I am long familiar with broke through the fog the other day and told me to get rid of it. This deity’s never steered me wrong in the course of my life, so I’m done letting this thing hang onto me. The deity tried, but all they managed to pull off of me was some…slimy muck? It was like trying to get Elmer’s glue off with just a fork, not very effective since the parasite sort of oozes through, and there’s so much of it.

Luna made it sort of quiet for a few hours, then the parasite seemed to fight back and is now more active than it’s been in a couple years. I’ve added the Dremus devourer sigil to my headboard, we’ll see how tonight goes.

I cannot stress enough that I literally haven’t been able to raise any magical energy in years because of this thing siphoning it all off faster than I can gather it. Banishing spells require some oomph and despite my best intentions there is no oomph to be mustered.

Older parasites are harder to get rid of. The reason why is because when infections are that deep, they begin to alter one’s mind to the point where banishments become difficult, if not impossible on their own. Think of it like a tree hit by a gale. If the tree’s roots are strong and deep, the tree will likely survive the gale with minimal damage. However, if its roots have began to rot or weaken, the tree will fall.

So, it sounds like you need a combination. Taking the three methods already suggested to you in the threads you linked, this is how i would layer it. The first would be using Raziel’s mantra, which will attack the roots these spirits are attached to and give some space for you to generate magic. I would then call luna to act as a buffer to provide more distance between you and these spirits. Finally, i would call upon Dremus for the kill, as he is a spirit who’s source to be fed is parasites.

If these rituals don’t jive with you, the basic formula for rituals of your choosing to layer to solve this problem is: Cord Cutting + Banishment + Baneful

If you are real daring, you could draw their energy into yourself… At your own risk

That is also another possiblity. I do have a method on how to destroy parasites through devouring but it is better suited for earlier states of infestation. I have never attempted it with deeper ones.

Also, one can never be sure what one is taking into themselves, energetically.

yup, which is why having a filtration or purification method is important. I’ll just post my method here for anyone who is in an earlier state that might be interested. I’ll eventually need to post more of my practices i have developed from observing/dealing with these kind of beings, including how to draw energy from “negative” environments into power to help remove yourself from them.

This is my technique of dealing with minor parasite spirits. The usual recommendations are to banish or starve them, which is certainly advisable for anyone uncomfortable with what I am suggesting and works very well. There is a great thread on the subject I will share down below: Personally, I prefer to turn the tables on things placed in my path to hinder me. Parasites achieve nothing but draining energy from a target, which can be effective for dealing with an enemy if a thought form is cr…

Keep the 5th pentacle of Mars on your bed! This one! 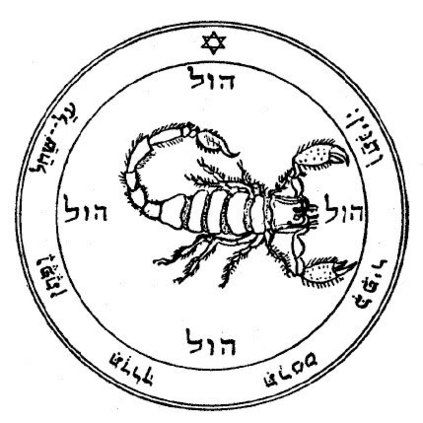 I have heard JS Garret say it destroys any parasites when they see it while you sleep!
Also if you have “magickal protection” book by Damon Brand there is a ritual to remove a parasite!
Also use the Core affirmation from psychic self-defense by Robert Bruce:
I am loved and I am worthy.
I am safe and I am free.
I am powerfully protected.
I am master of my body and ruler of my mind.
Repeating this daily before bed and as soon as you wake up or when you wake up in the middle of the night. This suggests your higher self to act on them!

8 Likes
Possibly being tormented in my sleep. Help would be greatly appreciated
Keteriya December 28, 2020, 10:42pm #8

Also if you have “magickal protection” book by Damon Brand there is a ritual to remove a parasite!

OH you know what there is one in Ben Woodcroft’s Angelic Protection Magick too, and it takes you a minimum of 3 days, but it walks you back through where you first noticed it and calls upon some kick ass angels.

I’ve never used it for myself, I always forget it’s there lol. But it’s real simple @RabbitMochi, you don’t have to use your energy, the angels do it for you- and by thinking about how it feels to have this parasite bothering you all the time, you essentially give them energy to do the job. I really like the banishing and protection rituals in the book and I use them daily myself.

I can’t recall the ritual @MiKu is recommending from Damon Brand, but his works tend to work well for me too.