I think Keteriya is offline for a while so perhaps I can help.

I’ve worked with Luna for quite a while now and she keeps pretty much anything unwanted at bay for me, I was attacked relentlessly for over a year and when no banishing methods worked for me Luna did within a few days so why not summon her and give it a try?

Even if your senses aren’t open tell her exactly what you want her to get rid of and ask her to place wards around you.

Hi Keteriya, many thanks for Luna.

I’ve been lurking for a couple of years and have just signed up. I wanted my first post (other than my intro) to be an acknowledgement of Luna.

I found her here quite a while back and would call her in intermittently. Lately I call her in every day, mostly because I really like the energy she brings with her. Its very gentle and soothing. That and I really like having her around

Slight Segway, no one knows that I practice, but I was giggling to myself about a thought that just occurred to me. If people did know and ask what I did, I would probably say “I Summon DEEEMMMOONNNSS!!.. and also MYYY LITTLE PONIES! FEAR ME!”

Anyway, my thanks to both you and Luna.

Thank you, Luna has been a big help! Honestly, I only had two sleep paralysis experiences since I started calling Luna (by the time I started posting on this thread). One of the last ones was when a shadowy pantom-like being was levitating outside above the terrice. I had realized I forgot to ask Luna to protect the whole property.

The entire property has been safe since then.

The actual last one was during a night at my other house, the stupid black art partfolio bag became a menacing dark essence again.

More about Luna: I once called her as I was playing an online game, someone with “Luna” in their username immediately joined. Eventually, I could imagine Luna was like, “Enough! Stop spamming me! You do not need to call me another time.” I got the message and learned to trust in Luna’s protection.

Hi Keteriya. Can I summon Luna to kill or banish a black arts entity that is attached to me? Thank you!

You may have already found out that you can, but you may have to direct her specifically to do it, if this is one of those spirits that were created and bound to you, or otherwise purchased by you- as you may have originally held the intent that the entity was allowed.

I think Keteriya is offline for a while so perhaps I can help.

Thank you, I’ve had to step way back and deal with some personal endeavors and so I have been hard to find

Slight Segway, no one knows that I practice, but I was giggling to myself about a thought that just occurred to me. If people did know and ask what I did, I would probably say “I Summon DEEEMMMOONNNSS!!.. and also MYYY LITTLE PONIES! FEAR ME!”

This is hilarious, I am glad she is helping you out and bringing some humor with her (albeit perhaps inadvertently)

Thank you, Luna has been a big help! Honestly, I only had two sleep paralysis experiences since I started calling Luna

This is really great to hear.

got the message and learned to trust in Luna’s protection

That one is hard for me sometimes too, but she will call out to me if there’s something I need to be aware of, the trouble for me is listening and understanding hey that’s luna, not some random spirit bullshit.

I just want to say thank you for creating Luna for all of us to use. I am new at summoning and what not. I’m actually going to print the sketch you created so I can color it myself while visualizing and asking her to protect my home and get rid of unwanted energies.

Funny thing is I also have a Luna pup. I can’t wait to share what she does for me. 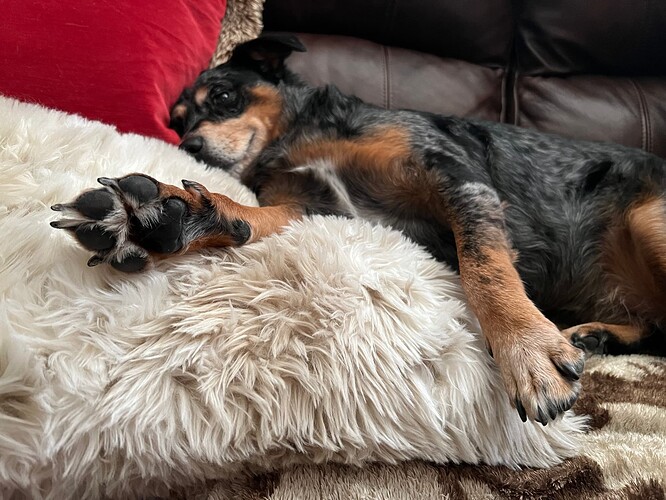 Bumbing this because members can benefit from this wonderful servitor. Many thanks @Keteriya for making this available for us. Thank you my friend.

This is the cutest thing ive ever seen!! My little pony 4 life!!

No words are enough to thank you for Luna, I am a total beginner with lots of theoretical knowledge on stuff and even messed around on ouija board,summoning demons,contacting spirits with no success,I had learnt reiki as I was told a entity has attached itself to me and that would keep on making me angry which was true as I was angry throughout the days at the littlest of things.People greatly benefit and feel my energy when I reiki but I don’t see any visions or nothing like they do🥲.I called forth Luna to just do a parasite cleanse and let me tell you,The calmness I feel now😭,no visions of her but my hands did get hot which usually happens when I reiki and I haven’t felt this calm and blissful for the past few years.I never knew such feeling existed,I have no idea what kinds of things attached themselves to me but I am feeling muchhhhh great now and am indebted to you for Luna😭.Thank You Luna!

3 posts were merged into an existing topic: Demonic Version of LBRP

Luna has helped me tremendously. I myself misappreciated her in the early days. It wasn’t until I was gifted a weapon by a yakshini, contacted the HGA, and a certain incident that I realised that.

You see, it was revealed to me that a certain parasite was feeding off my energy. This spirit had also happened to cast a working to make me lower my priorities in health and safety.

When I summoned luna I released her just a few months later, although there was no real reason too. it wasn’t even a trust issue because a divination on my part revealed that Luna was safe to use. I did it because of the parasite. it had the power to make me voluntarily dismiss my defenses or see it as unnecessary
The fricker even manipulated his/her energy to make it seem that luna was useless.

This same spirit also affected my will to do other things in the physical world and do magick in the astral.

At present, I don’t need luna. I am stronger, I have better defenses, Allies, servitors, crystals, divination, energetic audio and morphic fields siddhis etc.
I’m just paying homage to someone that aided me at the start of my journey with BALG

I am new on here and found Luna. I called her and asked her specifically to remove parasites. My senses are closed, I usually get everything through dreams. I could not feel Luna’s presence, BUT I felt tingling everywhere on my body, specially on my face as soon as I called her and told her my request. I wasn’t even meditating or in any state close to sleep, though I did close my eyes. It was a sensation as if worms were crawling on my face. I like to imagine that was Luna doing her job and the stubborn stuff were trying to resist. So thank you Luna

I like to imagine that was Luna doing her job and the stubborn stuff were trying to resist.

The spiritual senses can seem very subtle at times, but it sure sounds to me like she was there

I’m glad she’s able to help so many people!

It’s amazing of you to provide her to us. I hope someday I can create to the level of being able to help others to like you do.

Slightly curly Luna question.
I’m about to commence a potentially quite complex and challenging operation which will be executed with multiple phases over time. It involves alleviate some deeply ingrained issues that the target has and is wanting to be rid of.

I’m planning to send Luna to the target’s domicile to ensure any nasty energies are cleared out before each phase.
Of course when I call Luna in to clear my space she doesn’t interfere with things I’ve deliberately summoned.
But if I’m calling her to someone elses space to essentially perform clearing on their behalf, will she still recognise that things I’ve sent there are not to be interfered with in the same way as when I call her on my own behalf?
My interpretation of her instruction sheet suggests that this should be fine, but thought I should double check with you just in case I sabotage my work.

But if I’m calling her to someone elses space to essentially perform clearing on their behalf, will she still recognise that things I’ve sent there are not to be interfered with in the same way as when I call her on my own behalf?

Yes. She shouldn’t even need you to explain it since you’ve got the intent laid out prior to summoning her, she should pick up on it directly and proceed accordingly.

Yep, you read it right! I was thinking about simplifying the initial post for her and for some other things, but I was afraid that might make it harder for some, so I haven’t decided if I actually should or not.

I did just edit the title though, so that newer folks don’t have to guess so hard what this thread is lol I’ve been thinking that should be done for sure and was too lazy to do it before !

Yes. She shouldn’t even need you to explain it since you’ve got the intent laid out prior to summoning her, she should pick up on it directly and proceed accordingly.

Awesome thanks, really appreciate this

A quick question. Wondering about the long term sustainability of operator intention in relation to a print out of Luna?
Sorry, that made no sense.
So context:
A good friend of mine and her young progeny are coming back into the country to visit this holiday season.
I’ve got a regular present for said progeny (a book about a detective mouse who solves mysteries, she liked others in the same series so I’ve got her one she doesn’t have yet).

But I was pondering (if you are and Luna are okay with it), also giving her a framed printout of Luna. She loves My Little Ponies so I think she would enjoy it.
But would it be viable for me to request that Luna maintain an ongoing presence patrolling the vicinity of said printout?
I’m meaning a situation in which after its gifted no one would be using the gifted picture to call her in to its vicinity.
But of course I’m happy to do any work to make that possible.
Basically I’m hoping (if you are both agreeable to it) to gift sustained protection via Luna to the young recipient (who will know nothing of this), utilising Lunas image as a link to Luna actual.

I’m meaning a situation in which after its gifted no one would be using the gifted picture to call her in to its vicinity.

I’ve found that since I use the images like they are sigils, this works quite well and good and all of that jazz.

I was actually thinking recently that maybe I should digitize her image and make something a bit more print friendly for her, but I haven’t done it as of yet.

I think it sounds like a wonderful gift, personally!

You could also make an NFT out of Luna’s image! LOL

I swear it’s harder to stay on track when the only one you answer to is yourself!