Of course we can trade

. Do you want me to start or do you want to begin the first round? You can make it public or private @Silverleaf it’s up to you.

we can do it at the same time

, il do it yours in few mins

Dark forest, gnarly dead trees. Lots of mist and grey skies above. In front of me is a less traveled stony path…lots of bats for some reason, most of them are flying towards me, there are some in the trees though, and they’re sleeping, they are flying in small cells/packs. They appear a bit strange though as some of them are rather abnormally large, and have blood red and/or black fur. Eyes like burning embers, with leathery wings along with a claw at the “elbow” joint. But overall they look like classical vampire bats, although they’re abnormally large.

They all seem to come from a glade swarming around a person, seemingly a male. A little taller than average though and rather slender. What’s notable is the auric field which contains a certain gravitational pull. Like he’s draining the air around him. His mostly auric field at first glance invisible, but putting in some effort I can see that his aura is shimmering, light the cold light of stars, but it is a cold light literally and figuratively. The air around him is generally cold. And the energy of his auric field is not moving it seems like normal one’s a do. It seems it is now spiraling counterclockwise. Pulling energy in.

A general look at your chakras seems to indicate a overactive third eye and crown, and root chakra. There also seems to be an excess energy in your system at this moment. So it seems to be very important for me to tell you to channel creatively and above all productively. Keep your energy moving or it stagnates. You seem to based on this have started to work within the vampiric strain or have started vampyrism it was rather clear this time. Or you could’ve started to delve into necromancy which can contain rituals of necromancy either way the general theme seems to be undeath and it shows in your energies and overall vibes you give off. That’s about all I could find of relevance as of this moment.

stly auric field at first glance invisible, but putting in some effort I can see that his aura is shimmering, light the cold light of stars, but it is a cold light literally and figuratively. The air around him is generally cold. And the energy of his auric fiel

thanks a lot was on a long phone call

see visions of an alien world , filled with alien life , a maiden looking girl comes around , she an alien too , someone mystical , 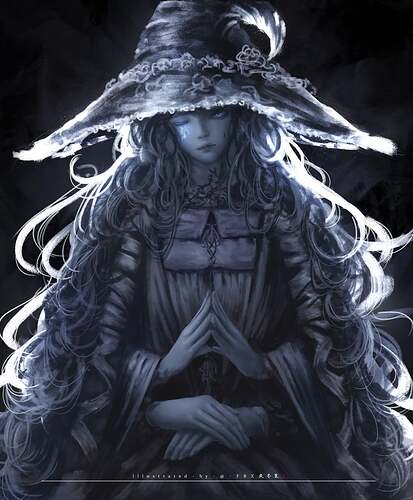 she looked kinda like this one - the hat , also a it spectral , she is offering some kind of knowledge , or pursuing something out of the ordinary , next to the alien world is a deep bottomless pit , the true abyss , but that’s another path seems like it , close related but not the same .

your chakras seem fine , saw a motion of energy going from your hand to your spine , looked blue to me , like fire blue burnings, all your energy spots are closely intertwined holding each other strong just like muscles . visions of a centipede comes to mind for some reason .

i asked on something what you should know and the sun tarot card came up .

hope somehow it make sense thanks a lot !

The spectral lady I was expecting more or less it resonates quite a lot. I am recently turned devotee to Santa Muerte. I wasn’t expectinng her to look like that, at all to anyone. I have yet to see her beyond her general depictions of paintings, etc. She’s more or less there, from time to time looming about the background so to speak. I honestly found her when I needed her so to speak…she accepts anyone sure, but I am more or less starting to delve deeper into her current. Been exploring the white robe first as that’s smart, or I could fuck myself up royally I might add. The blue energy you see may be because I’ve been working my energy body a whole lot more as of late particularly focusing more on the smaller chakras, rather than just the large one’s. I’ll dig a bit with the sun tarot, as that’s interesting for sure.

Anyway, in short; nice work. You picked up on a lot of stuff. Thanks

Hey, sorry, I’m on a road trip so I wasn’t checking my phone as much. Do you mind starting? I’ll return

Hi, could we trade?

Could you scan to see how I can overcome my fear of being wrong and lack of confidence in myself and my thinking?

I’ll start when I get wake up it’s 3 am over here.

That’s more along the lines of a reading. I can scan your general emotional state and spiritual health and maybe surmise how those affect your emotional state and thinking. And see if there are any entities near you. As for your how to improve confidence in self and how you think. That may be better answered through a more direct divination session using tarot/runes.

But yes we can definitely try and scan you and see what I can find out.

Thank you, I would like to pm you and talk about some issues I’ve been having. I can scan right now.

I see a version of your avatar maniacally laughing with black, devil eyes. I see darkness, and flames that engulf a mountain.

I then get a message. The message is that Evil dominates the omniverse, and that Good is the ideal of the whole. To be evil is to have an identity that is not the whole, that the only way to progress is to become evil because to be merely good is to be subsumed into the whole, to become the abstract ideal of what is “good”. That is all I got

When I try again, I get a golden eye stare back at me, saying, “That is all.”

Hey, can I PM you what I want you to scan? Also, what would you like in return? Thanks

Go ahead and PM me. And we’ll see what I can do.

Yo! I think im ready to give this a go. This will be my first time scanning a stranger so Ill scan first. Id like mine public and just a general. Who wants to be my partner in this!?!

Hello there! Lets trade. Ill scan 1st! Do you have any particulars you’d like? Also, i wont be able to scan for several hours. Got a busy few hours ahead of me.

Sure, just a general scan of my energy and energies around me. Thanks!

Ya same for me. And ill get back to you in roughly 4-5 hours. Im not 100% sure if i have PM privileges as of yet. I never bothered to check but im sure i do. So if not, would it be alright for me to post it here?

Okay. I picked up a purple looking auraand a feeling of stress The third eye is lighter in color and brighter. A man. Not body builder ripped but toned. Not sure if thats you. Longer dark hair. Black energies around you that do not mean you well. There are 3 that are for sure but a few more in the back drop that seem to be heading your way. But i also see that there is something much bigger than any of them and it’s the bright white energy. Very pure. I see it buzzdozing over negatives coming your way and that you are familiar with the source of this energy. The energy also feels feminine. Oh and i felt something like an old injury that you have that aches from time to time and you do your best to conceal it. That’s all i got. Let me know how i did!