Most succubus are very serious about relationships. As long as you talk to them once in a while and when they touch you and you acknowledge it, they’ll stay. When they agree to a relationship they are serious as they can be, so imagine when one agrees to marriage!

Can i really make a succubus love me so she’ll never leave me ?

No, you can’t “make” a succubus to love you and make her to stay. That’s a consensual choice she has to make by her own. And even when she made a choice to be with you, she might need permission to proceed with the proposal to start a relationship with you. Once the political bureaucracy is done, there’s no turning back.

If she loved me , would she stay with me for a lifetime?

That’s pretty much the point, isn’t it? There’s even a slight chance that she’s been with you long before you even started the ritual. And the deeper the relationship becomes, the bigger the chance is that it will last beyond a lifetime. Their love has no boundaries, and they can be very loyal to the point that their own sacrifices and compromises to be with us is much bigger than our own love and loyalty are for them. That also makes them a very potent and dangerous spirit for anyone trying to hurt you. You simply don’t mess with the one’s we love.

Hey maybe im just not bright enough, but i cant figure out how to pm you

. I have a question regarding succubae and i really need help, i heard you are the guy to go to.

Hey, man. You are unable to PM because you are new to this forum (your account says you joined only two hours ago), but regular members can PM you, so hopefully, @succupedia will be willing to answer your questions. In the meantime, I suggest you do a search of the forum as there is a lot of information on succubi available here so you may find your answers somewhere.

Oh i see, thanks for explaining, i read something about being able to pm after doing the discobot tutorial so i was super confused, ive been lurking for quite a while (couple of weeks), and i did an older version of the letter, during the super blue blood moon, and i got interesting/scary results from it.

I have no idea what a “discobot tutorial” is, but you should gain the ability to PM in a few days, I believe. It doesn’t take long. @succupedia is one of the nicest and most helpful people on this forum so I’m sure he’ll PM you once he returns. He is best equipped to help with your results from the letter method.

Heh, must be a new feature, it pretty much just had me do a tutorial on how to navigate the forum and do certain things with text, which btw was very helpful as i never really went on forums before this. Thanks for the insight and time as i’m eager to be a part of this fantastic forum!

Hi pro
I hope that you didn’t forget me

I was wondering … what is the most damage that a succubus can do with me if i make her angry? :3
And also … is there any ritual but just for summoning a succubus without needing Lillith ? As you daid before the powerful succubus won’t follow any demon like Lillith
Also … from your experiences … what are things that they’d like in us?
What’s the behaviour should i do to make her -at least- love me?

I was wondering … what is the most damage that a succubus can do with me if i make her angry? :3

That depends on your ability of perception, but if you have the ability to feel energies and spirits on a physical level, it can be quite damaging.

I was about to put some graphical and scary gifs to show some examples of what they can do, but that would just inflict doubt and possibly fear by doing that. Let’s just say that she could do some serious damage. If she chose to do so. But there’s nothing that says she would. Even they act out independently if they get hurt or angry, and maybe she brushes it off and sees the bigger picture.

… is there any ritual but just for summoning a succubus without needing Lillith ?

I know of a few rituals to evoke independent succubus, but you have to do these kind of searches by yourself. It’s out there, if you do some research.

They seems to make their choices based on our spirits and souls, along with our deepest personalities. Our physical appearance is irrelevant.

What’s the behaviour should i do to make her -at least- love me?

Simple. Be YOURSELF and be honest about everything.

Lilith has three other sisters that can offer their daughters to you. I read at least one other person in this forum has a relationship with Namaah and one of her daughters.

There’s even a slight chance that she’s been with you long before you even started the ritual. And the deeper the relationship becomes, the bigger the chance is that it will last beyond a lifetime.

I have to ask you that.
How? How can a Succubus be with you, before you make the decision to call one?
Its a bit paradox. Its like getting a delivery before making an order on Amazon.

Let me begin by saying I Humbly thank u for accepting me…I have had the pull for a long time and very recently I realized when I thought of Satan and a succubus I get very excited and my whole body tingles, S o me being one to jump right in went online and found invocation a performed it now today I’m playing guitar and saw shadows constantly and then my skill level went up substantially for a time and I could feel her and I’m laying down now and feel her what do I do in the present and could somebody please hold me turn me point me in the right direction to begin my jiurney

Welcome to the forum, @Newb000000. Please take a moment to click the image below and introduce yourself:

Not much knowledge of Monson but I think you could work directly with all spirits in the Necronomicon spellbook. I can offer some guidance with regards to the order of working but that doesn’t matter too much.
Btw, it is very important that self-knowledge be a part of everything you do. There are many paths to this of course, but I would recommend daily meditation, being present, detached engagement etc. Also, if you haven’t read the seemingly “kiddish” Law of Attraction stuff (

i.e. the Secret, the Magic and the Power

) , I recommend you do along with all of Neville Goddard’s work.

A post was split to a new topic: New member, spirit sex but looking for more

Please can you help with minoson sigil from the grimoire verum…I just don’t know which one is it. Thanks 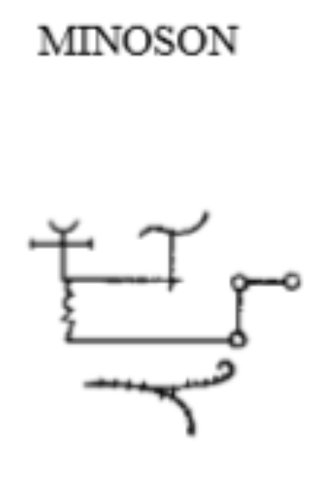