Photo question from ritual: The Dead Who Haunt Us (from Dante Abiel's Necromantic Sorcery: Forbidden Rites of Death Magick)

I tried this ritual for this most recent full moon and ended up at a tombstone with almost the exact same name as my boyfriend. I blurred it out in the photos here for privacy.
I think I caught some orbs on camera. I noticed a couple green glowing lights in front of the tombstone when I arrived in front of it, so I took a picture. I took another one when I was wrapping up (so I can use the photo as a sort of sigil later) and just noticed 3 green orbs in this picture in different positions that I didn’t notice when I was there. Lots of activity. 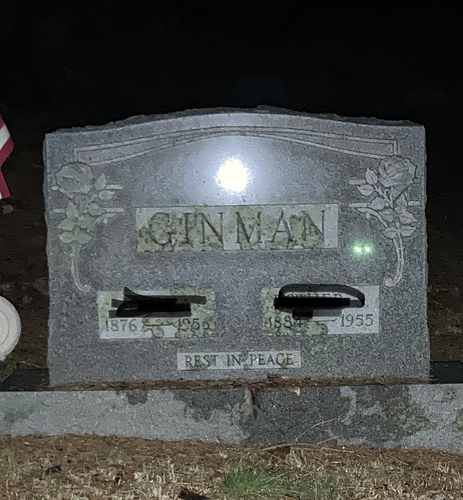 image750×809 514 KB
I’m still learning divination and scanning so I’m not sure if I’m reading this right.
What sense does you get from the orbs? Are they what I think they are? 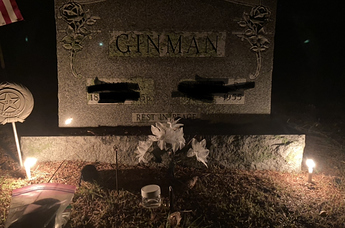 image750×497 350 KB
1876-1956
Some info: Ginmans served in the first world war (which would match his birthday and the veteran flag) it was in the back of one part of the cemetery (huge) at the bottom of a hill under a tree shrouded in darkness, I could barely see it from where I was coming from but I felt pulled there to that dark spot under the tree. I think he was surprised and amused at my presence. It didn’t look like he’s had visitors in a while.
In a recent meditation I think I got a glimpse of a past life. It looked like we’d lost a battle and I was dying among the corpses of my buddies. I think I saw a bayonet so guns existed already at that time. Could that be connected at all or was that just a random vision with no relevance at all?
I think I’m going crazy.
4 Likes
TheGardener December 1, 2020, 12:10pm #2

That last photo is fascinating. If I had to guess, I think your vision/feeling of battle probably came from Mr. Ginman since you made an effort to contact him. My husband, who never remembers his dreams and is not a spiritual person, has been getting very clear feelings, dreams and visions lately (of protecting children mostly). I had a similar feeling two days prior. His dad passed a year ago last week and I’ve been keeping a candle lit for him. I’m certain my father-in-law is trying to communicate with us. Have you done any other rituals from the book? Was considering buying it but I have so many books already and I usually buy less expensive Kindle titles.

he’s not very spiritual either but he’s open minded
This is the first ritual I’ve tried from the book. I’ll update this as I progress, so hopefully I can provide a more detailed/informed response. I bought it a few weeks ago and just decided to start using it this past week. So far, I like it and am learning a lot from what little I’ve read. Sorry I wish I could be more helpful, and I’ll update this when I do the next one. I forgot to mention the meditation vision of the battlefield came about a month ago?
Thanks again for your response❤️

Update:
Going through old photos, caught what I think are orbs or I could be wrong (See right in front the candles). They’re in front of a small devotional altar I made for Sallos in September when I asked him for help .
This was also taken on a different phone (I was thinking maybe it’s the phone but I’ve since bought a new phone and switched over and then just this full moon photographed the green orbs in the original post) 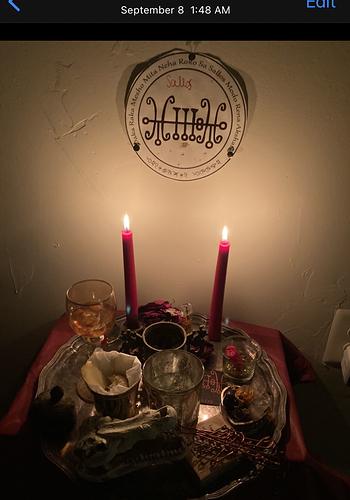 Please, ask your guides to ensure that if the spirit is ready to move on from this plane it has the opportunity. Some get stuck here for quite some time and I sensed a strong presence in the second photo.

Thank you for your response!

I did ask a guide to come with me when I left home just to help guide me. Before I actually started the ritual from the book, something compelled me to light an extra black candle and to communicate to any spirits who were lingering/stuck and wanted to move on to focus on the light of the flame and let it be a portal to move on something like that. It didn’t feel like me talking completely, autopilot almost. After that, I asked if he wanted to join me and continued with the ritual. I felt sick afterwards for a few hours, like flu-like.
It’s raining unfortunately tonight I might need to go back another night.

Im not familiar with the rituals in the book. I can feel a guide there in the photo but mostly its just the dead. It makes me happy to know you did that for them. Psychopompy is a path of empathy and a path of patience, at least in my opinion. May you be blessed.

Going to definitely follow wherever this takes me. I’m excited for the next time I get to go back. Hopefully it stops raining…
Thanks again to both you and @TheGardener for your responses. I feel less like I’m losing my mind.

Sometimes losing your mind can be the best thing for you.

May you be blessed too🖤

Remembered a few sentences that came out of my mouth (not sure who to credit there, but I’m guessing my guide??? Higher self? I’ve never really tried psychopompy before so I dunno what that was. Or maybe it was just me and my own mundane mind imagining things…) anyways…
“Focus on the light of the flame… It cannot burn you as it burns me, as it did yours in life or… It is your portal to your next destination wherever you choose…”

I was going to go tonight but something was telling me not to (I thought it was just my procrastinating ass again but I also randomly, like just unexpectedly clicked through (this clickbait caught my eye because of the cemetery name) so I read the article written on 10/2 or sometime around then (a couple months ago) that there were a couple young vandals (one of them looks around my size- I could probably be mistaken for her in the dark…) Causing damage and stealing at the cemetery regularly. I dunno it feels risky and I am not sure if it’s ‘safe’ for me at this point. Just a couple kids probably being dumb😒why do people do this shit it’s stupid and disrespectful
So after I clicked through on that news article, I figured I’d ask the pendulum and the answer to cemetery tonight seems to be no?

Felt like going back. Got yes on pendulum before leaving home and before entering the gates of the cemetery.
Continued to strengthen connection to Mr Ginman via the next consecutive ritual “dead brother” I psychopomped beforehand so he had an opportunity to go if he wanted to but he ended up staying, I think his wife stayed as well but she wouldn’t be working with me in the same way. Hoping other spirits heard me too and had a chance to move on if they wanted to as well, and that I did my part to help. I asked for permission to take photos this time (while I wait for my new digital camera memory card to arrive, so still using iPhone) after I was wrapping up and about to leave
Wondering if anyone is getting anything from these photos I took this morning around 3-4am. I used a longer burning candle inside an empty catfood ton for the psychopomp-ing (second two photos) 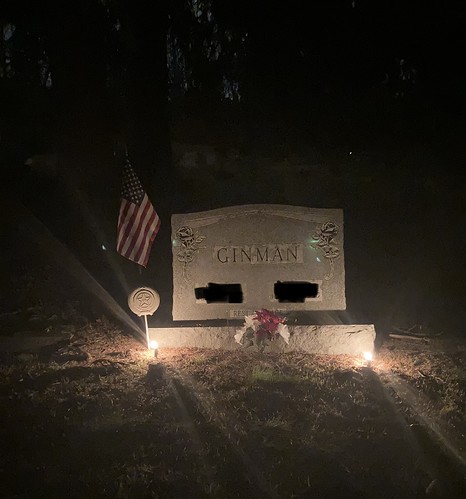 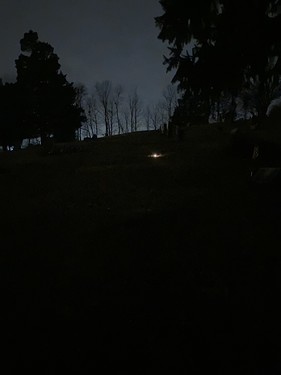 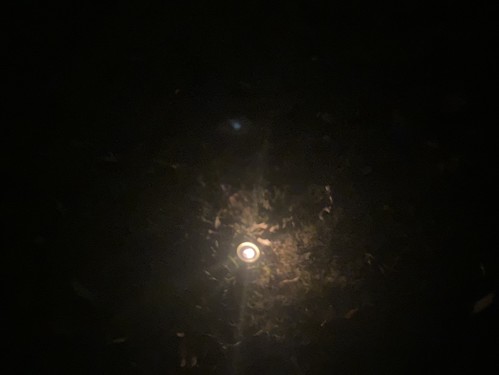 @Czar_Lish You inspired me! Went to the cemetery today and found some interesting people I would like to get to know. Was looking for a headstone with a cross and it felt like I was led to it. It’s a well kept cemetery in the summer, but doesn’t get much TLC when the grass doesn’t need trimmed. Picked up tattered flags and beer bottles. Going back tomorrow with a larger trash bag to get the plastic flower petals. It’s respectful to the dead PLUS if I’m seen cleaning it on a regular basis, people won’t be (as) suspicious if they see me there during a ritual.

Bought the Kindle version of Blood Sorcery Bible Volume 1: Rituals in Necromancy by Sorceress Cagliastro last night. Will probably buy Dante Abie’s book once I get all my holiday shopping done. Thanks for the motivation! Will keep you posted when I get a ritual done.

I’m so glad! I’d love to hear about your ritual so yay keep me posted​:black_heart:
I’ll have to get a copy of that too. I got a PM from another member who spoke less favorably of the book by Dante Abiel, specifically the later half of the book. I haven’t gotten that far myself yet, but thought I’d just be transparent with what I’m hearing about it.
Thank you❤️ My day was taking a kinda shitty turn and hearing this made it better. 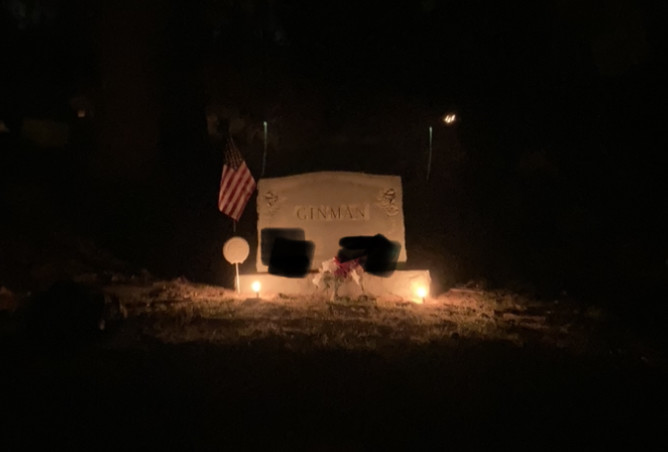 Went back to the cemetery to see Mr Ginman. Also my new memory card arrived today for my digital camera! Looking forward to going through footage soon finally. I brought it with me to the cemetery and was permitted to film part of the workings. (Asked with pendulum again for entry and to confirm it was ok to take photos or film…) I brought the beelzebub fetish again because I called on him to be my guide again. Started and ended with psychopomp-ing stuck spirits. Mr and Mrs Ginman appear to be staying for now

Just got back from the cemetery again. My digital camera (went in with a full battery) died within a total of maybe 10 minutes or less…
Is there a workaround for that kind of battery drain if I want to record workings? (With permission from the cemetery guardians and spirits)
Took this photo at the end (based on as quick pendulum read, he did not want to be filmed or recorded during the dead brother ritual to continue strengthening connection to Mr Ginman by evoking him, but allowed photos after I was done). Starting to feel like a creep haha someone close to where I parked saw me but he didn’t really care, probably thinking “Who is this random girl sticking flowers in front of this guy’s tombstone everyday…” 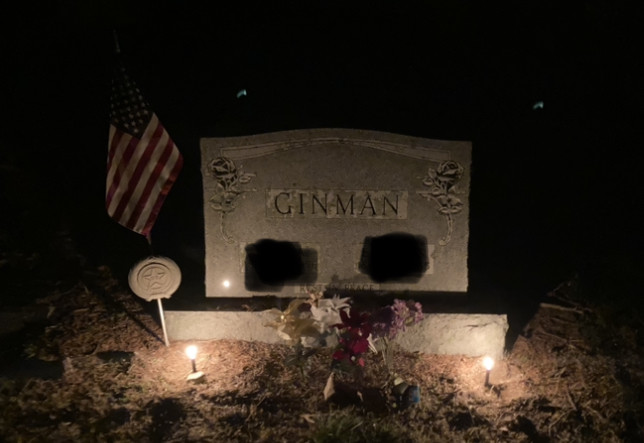 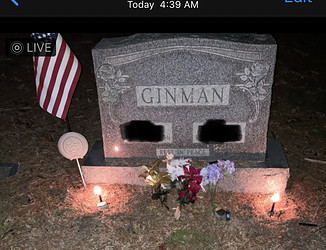 Hello!
I was looking at your cemetery pics and saw something there so I scrutinized with some filters and found these; 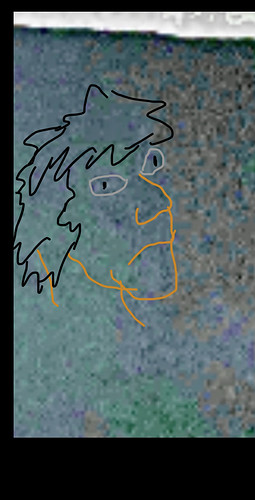 There’s actually a lot of activy going on. Many spirits trying to “sit on the same seat” 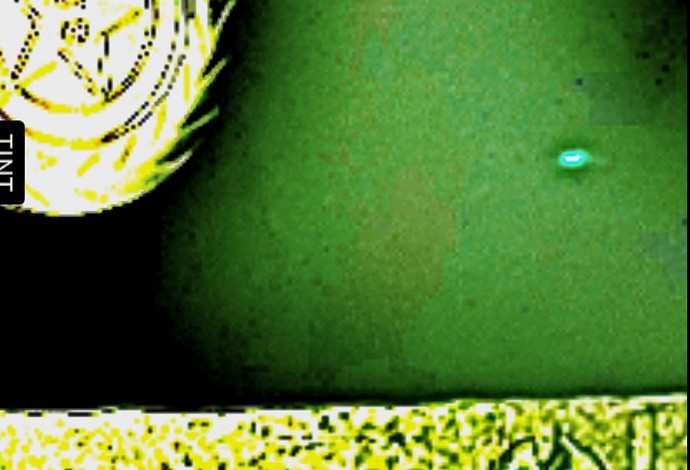 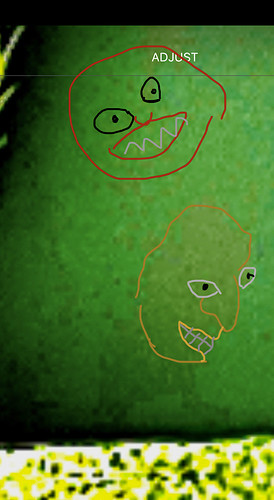