There is no good category for this thread.

“All things which may be known must at one point be unknown.
Enter here and expect nothing it is what you will find.”

Today this sigil was given to me by those known as the Hidden ones or the SUENEDER. In the time I was contemplating on it I nearly accomplished a task just the day prior I had said was impossible.

I do not know all the sigil can do at this time. I have had trouble naming it also. It is not the sigil of the Hidden Ones, but it is a beacon of their energy. 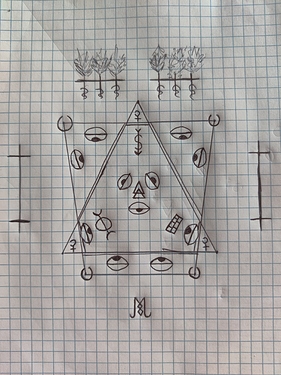 A trapazoid programmed to the number 9 (9999) holds 8 inward looking eyes and bisects a triangle. At each point of the triangle is a Black Moon Lilith. In its center is held 2 intersecting triangles surrounded by three upward facing eyes (staring at the reader making a column coming 90° from the paper). Above the whole structure is held 6 torches facing up, with a smoky extinguished torch reflected on the underside.

• what this can do:
Make the possible impossible and vice versa
Control certainty and uncertainty
Contact with Hidden ones
Divination over possibilities
Divination into things lost and forgot.

The energy of this is way different than expected after drawing it. That and the fact I have so much difficulty naming it proves the strength of the connection to the SUENEDER as they rule things unknown and things impossible to know.

I call this the Negative Generation Engine for now because of how it creates negative energy. I do not mean malicious or unhelpful. Think like antimatter. If humanity is 6 its negative point is -6. Important to distinguish though is -6 is not the reverse of 6.

I would love any feedback or any stories if anyone uses this. I would say this is definitely not for a beginner and probably not for intermediate users unless you feel a particularly strong pull. Caution is advised.

For anyone who thinks they are a competent or fairly experienced practitioner the above warning still applies but I would add to not expect much. They love to play with expectations (its in their nature to be… difficult to define).