I saw this concept mentioned recently ans i was wondering the thoughts from others.

I guess this falls under the idea of the Christian witch

Hard core Christians are dead set AGAINST christian ‘witches’. ““Thou shalt not suffer a witch to live.”” Of course the bible says "“Rebellion is as the sin of witchcraft, stubbornness is as the sin of idolatry”. I do not know if that is implying that Rebellion is the problem and NOT the powers of the human mind and soul. As christians are generally against astral travel, levitation, telekinesis, divination, evocation, yoga, kundalini, etc.

I find mostly that are the televangelists/ charsimatic billy gram types. I read one of those little nook as a kids that yoga and meditation invites demons into the body.

I find those guys to be totally un christian. As they use God to take money. Basically wrapped up Faith…

Well that seems to define me fairly well so maybe?

I guess it can work in theory, but youre likely to encounter problems. Solving those could make the path more interesting though.

No. No no no. Not a fan of the idea. Lucifer and the Christian God to me are two drastically different beings who are either opposed to one another, or at least opposed to what the other’s about.

I’ve been wanting to tell this story for a few days, but last time I saw my therapist, she asked me why I have such a disdain for God. So, I told her this.

Imagine you’re having car trouble, and God’s a mechanic. You go to him and he asks you to sign a contract stating you’ll go to him EXCLUSIVELY for business, as well as dictating what kind of stuff you can put in your car, where you can drive it (typically a very small sphere of locations), and that you’re not allowed to work on the car yourself for any reason. You also have to go to his mechanic shop once a week and tell him everything you’ve done with your car. And if you break the contract, he gets to keep the car.

She said that is very extreme, and I replied, “That’s the idea.”

As for Lucifer, I think if you went to him with car trouble, he’ll either work on it or refer to someone else who can help you. “I hear Asmodeus is pretty good when it comes to custom paint jobs.”

One side demands an exclusive relationship, wants control over your life, and gives drastic ultimatums to pressure you. The other would willingly encourage you to explore other avenues.

And for those who may disagree, I’m talking from my experience. That’s the vibe I get from the God of Christianity.

So what your saying is…

What I’m saying is that you gotta do some mental gymnastics to reconcile the two. Once again, my opinion.

Here is mine. This is a bit Gnostic though

Christ came to break down the temple and rebuilt it. A teacher of truth and light.

Frankly, I feel like the Abrahamic God stole this world from other gods and writes fate into his own favor. Not sure what you’d call that.

I just feel more comfortable working with other gods.

I seen morgue make a few videos about Jesus ans Lucifer being the same person. Using the “light bringer” comparrision 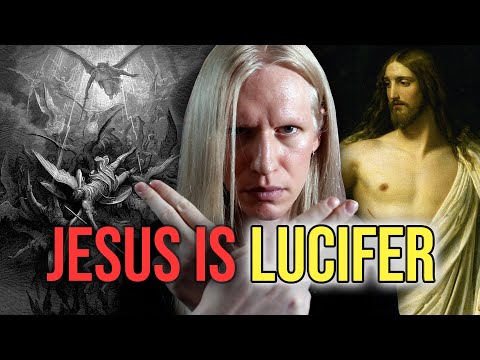 To my mind, yes, if you’re using s Christian worldview, and Christian concept and language, including “Lucifer” and “Satan” that is Christianity…

So, it doesn’t matter if it’s “reverse Christianity” or a “Christian witch”, everything about it is basically Christian. You’re believing and and using Christian philosophy and have adopted it as your truth, so you’re following a version or sect of Christianity.

And as the energy of the Christ consciousness as Jesus taught is all about freedom and self determination and personal responsibility, it’s more Luciferian than you’d expect. I think Lucifer is not at all at odds with he concept of Christed consciousness and in fact WANTS us to ascend, which is exactly about gaining christ consciousness.

I don’t agree that they are the same being, I think Jesus of Nazareth was one of many mystery school adepts teaching how to become ascended. The teachings of that school were heavily supressed by the JCI churches that deliberately usurp the knowledge and hide it for control (enter COnstantine throwing out 42 books of the original teachings that were originally in the bible and rewriting the rest: so much for the “word of god”) . Lucifer is his own person, as is Hermes/Thoth, but they teach the same truths.

Lucifer is at odds with jehova/yhwh, as a psychopathic, evil, war mongering, child killing control freak and basically a rogue demon pretending to be a god. Lucifer isn’t fallen at all: Jehova is, because evil inverts the truth.

So ignoring organised religion, I actually see no discord there at all.

TL;DR the concept of ascension and christed consciousness is vital. The original teaching that could be called Christian as in, learning about becoming a Christed person, as in YOU becoming Christ and a son of god yourself, is huge. Its totally lost in organised religion. Lucifer will teach this though from the astral. So will all of the ascendeds.

Wow that’s what I call an example! I’ll have to quote this sometime

In addition: In the contract you’ll agree not to learn to do any fixing by yourself, and you need to only use the car for the purposes listed in the contract (it’s very spesific)

Witchcraft and divination in the Hebrew Bible - Wikipedia . This says something about the JCI view on witchcraft.

Christian views on magic - Wikipedia . This explains it well

And as the energy of the Christ consciousness as Jesus taught is all about freedom and self determination and personal responsibility, it’s more Luciferian than you’d expect.

This is kinda how i see it

Stay away from politics please. Political posts are removed without notice.