So, one of my earliest memories on a dream was seeing a gigantic lions head floating in a circular lake mane and all, its mouth shut.
On top of its head was a much smaller lions head and mane with an unnaturally long neck and its mouth opened too wide, almost as if stretched.
the smaller head was wearing a Crown.
It was also daytime.

Any help figuring this out is greatly appreciated.

The top part sounds kind of heraldic. Do you know if your family name has a coat of arms? Lions are often used as charges on shields representing valour, nobility and courage, the crown is again nobility. 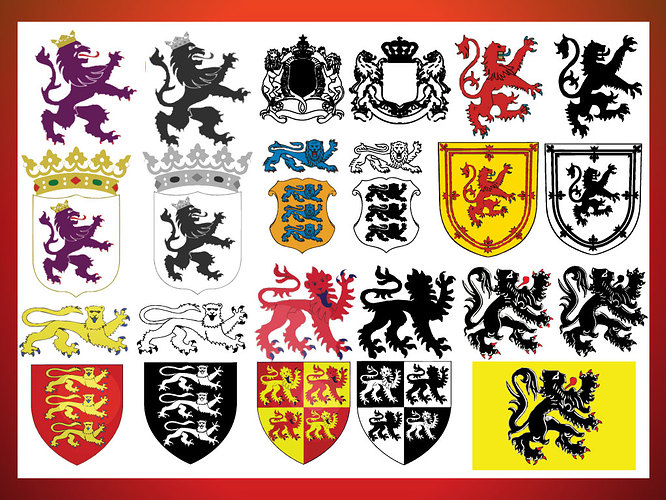 I dont even know my families real last name, was told it got changed because an ancestor killed a sheriff.

On top of its head was a much smaller lions head and mane with an unnaturally long neck and its mouth opened too wide, almost as if stretched.

We’re told they never existed and ancient people mistook giraffes, whose necks are tall and rigid and which are gentle and vulnerable plant eaters, for vicious cats with long snakelike flexible necks, which terrified people.

Because humans today assume all humans in the past were blithering idiots, even though everything was innately more life-or-death in the days before GPS and helicopter rescues. And as though they were liars, even though a man’s word was his bond, and misleading the rich and wealthy would likely result in a swift death.

well I looked at some heraldic stuff and the way the face is sent shivers through me for the top head.
I cant find anything about a lion wearing a tiny lion wearing a crown on its head, two headed lions are always shown connected by the neck. I know there was no body, only heads on heads.

I only really focused on the top head with the neck, it scared me but didnt move it was like perfectly stoic.

Try this, and stay open to any images you receive afterwards: Hyperborean Meditation

the funny thing is this is the only time lions have ever shown up in dreams, or crowns.
I do have an affinity towards cats, I mean… cats are just tiny lions, so maybe the tiny lion head had to do with house cats. or cats in general, I’m also looking into things associated with cats or lions…I know Lilith is aaaaand I’ve done plenty of meditations over the years with her, but this dream was way before I even understood anything, I was like 4 or something.

So unless I’ve been being called to someone for that long. I know I kept seeing owls a some years back when I was being uprooted and dragged to a new state after death and near homelessness, then had more abuse and owls just kept popping up more and more until I got out of that place, then started trying to connect with Lilith.

But lions, yeah. I’ll try your suggestion and see whats up, I dont feel like the lions dream was really connected to Lilith.

gigantic lions head floating in a circular lake mane and all, its mouth shut.

That sounds like a spermathozoid. A lion from front and a serpent from above