The day was good. Mood was stable.

Had a difficult manifestation come through today. It was one for which I was a little desperate, but I managed to overcome my doubts enough and it happened. Chalk one up for the Law of Assumption and brazen impudence. No spirits or ritual was involved.

I vibrated the high vibration mantra for twenty minutes in the late afternoon, and in the evening, I connected with the goddess Hestia, via pathworking.

I found myself in a Greek temple, at the base of a set of stairs, at the top of which burned a large, vibrant, hearth fire. Hestia stepped out from behind a column and welcomed me. She was dressed in a typical Greek tunic. She had a very motherly energy, comforting and safe. I spoke to her about my search for a home to truly call me own, and asked for her blessing and help. Her smile was beautiful.

I wrapped up my adventures for the day with silently chanting the spiritual perfection mantra for around thirty-five minutes.

My thoughts are confused.

I had a vision while trying to sleep. I was burning, my flesh seared from my bones. Devoured by the Light. Man vaporized for the god to rise.

I couldn’t bring my mind back so I could relax. I kept spinning, whirling through time and space. It was dizzying.

i don’t know what it means. It took a while to calm down enough to finally sleep. My dreams were strange, full of acts of power, and vengeance.

The day was alright. Weather was cool, with some light rain.

Vibrated the high vibration mantra for thirty minutes, and then followed it with the inner divinity mantra for an additional twenty minutes.

I’m getting the sense that something is going on behind the scenes of my life, something I have no idea about, and that goes beyond my own simple material desires. I think Ereshkigal showing up was a precursor to something else. I’m starting to get a little paranoid lol

I took the previous day off from all magick, so this day I doubled up on my mantras. Vibrated the high vibration mantra for thirty minutes, and followed it with vibrating the inner divinity mantra for another twenty minutes.

Later. I chanted the cleanse/purge mantra but had to stop after only ten minutes as I developed a headache. Afterwards, I spent a few minutes doing the dissolving process from the Bruce Frantzis water tradition of qi gong to try and break up anything the mantra may have brought up into my energy body.

Did some breathwork, and sexual energy circulation, before chanting the spiritual perfection mantra for about fifteen minutes before bed.

A low-key day. Mood was good.

Vibrated the high vibration mantra for thirty minutes, and followed it with the inner divinity mantra for another ten minutes.

In the evening, I meditated to a theta binaural for an hour.

Fell asleep to a delta binaural track, while practicing the Lullaby technique.

Vibrated the high vibration/energetic attachment mantra for 30 minutes, and followed it with the inner divinity for fifteen minutes. My neck and shoulders have been very tight lately, most likely due to my poor sleep, and the tension seems to be causing the energy of the mantras to be trapped in my head and giving me a headache.

After a meal, I meditated to a theta binaural track for an hour.

Have been feeling exhausted and out of sorts lately, with restless sleep. Not sure, but I think it may be due to the delta binaural track I’ve been falling asleep to.

And the adventures continue.

I’ve started the protocols in Damon Brand’s book, Magickal Destiny, for making contact with the HGA. The first protocol is basically just reaching out with intention and then sitting and being receptive. I performed it after vibrating the high vibration mantra for thirty minutes.

I’m still working with the Neville Goddard Lullaby Method before sleep. So far, I’ve been able to manifest approximately three out every five intentions with the Law of Assumption. Still have much practice to do with this particular adventure.

I am currently reading Jason Miller’s new book, Consorting With Spirits, and am finding some parallels to my own musings on the subject.

I’ve been contemplating what may possibly result with combining the protocols from Damon Brand’s book, and my mantras. I’ve been performing the first protocol immediately after vibrating the attachment clearing mantra, and I couldn’t help but wonder if the mantra might aid in connecting with the HGA. It also occurred to me to try performing the protocol twice daily, with the second time after chanting the spiritual perfection mantra,.

I’ve begun some financial magick, to go along with my more personal Ascension oriented work I’m still working with the Law of Assumption via the Lullaby Method, and am seeking to consistently enter, and remain in, the god-state.

After vibrating the attachment clearing mantra and performing the first protocol from Magickal Destiny, i felt an intuitive nudge to start the second protocol.

Pathworked with Raziel, and asked her for another mantra or invocation for opening more to the god-state. I am pretty closed off, and have a difficult time with letting go of control enough to allow power to flow through me unrestrained, and so was looking for something to help. I was given something, but haven’t tested it yet.

Chanted the spiritual perfection mantra for around fifteen minutes in the evening, and ended the adventures with the Lullaby method before sleep.

After vibrating the attachment clearing mantra for thirty minutes, I chanted the new godself invocation mantra I received from Raziel for about fifteen minutes. Oh, boy, did it make me light headed. I actually became somewhat inebriated with the energy. Perhaps it would be best not to do it after another high energy mantra like the attachment clearing one.

Afterwards, I performed the first protocol for my HGA and felt…something.

In the late afternoon I chanted the mantra for healing the subtle body for thirty minutes. I suspect I’m going to be travelling soon, and want to make sure my bodies are healthy enough for the journey.

The second protocol from Magickal Destiny doesn’t require much, so I performed it while watching a movie. Basically, it is simply handing over a problem to the HGA.

Meditated to a theta binaural track for two hours.

In the late evening, I chanted the spiritual perfection mantra for about fifteen minutes, using the Great Voice, so as not to wake up the roommates. My head felt a little weird afterwards for some reason.

Fell asleep doing the Lullaby Method while listening to another binaural track.

Chanted the godself invocation mantra for twenty minutes and followed it with the first HGA protocol from Magickal Destiny.

In the evening, I meditated to a theta binaural track for about two hours.

Capped the day’s adventures with the Lullaby Method.

In the evening, I meditated to a theta binaural track for an hour.

Fell asleep with the Lullaby Method.

Not a lot to journal about lately. Have been mainly sticking with the mantra chanting and the HGA protocols, with some practical money magick from different books thrown in. I’ve been in a low mood lately, feeling down and unmotivated. Sometimes it just feels like I’m swimming against the tide, and I’m exhausted. I’m still trying to work with the Lullaby method of Neville Goddard, but it’s difficult to “assume the feeling of the wish fulfilled” when I feel such a deep tiredness.

Hang in there! Sometimes you have bad days, and you need to rest for some time. The motivation will return!

Sometimes it just feels like I’m swimming against the tide

Yes, me, too. For ALL of us, regardless of knowledge, experience, and ability. One foot in front of the other.

The day was better. Mood was more balanced.

Later, I performed the second ritual from Henry Archer’s book.

In the late evening, I meditated to a theta track for an hour.

A full day of magick.

Vibrated the energetic attachment mantra for twenty minutes, followed by the god-self invocation mantra for fifteen minutes and the first HGA protocol.

An hour or so later I did ritual two from Henry Archer’s book.

In the early evening, I performed some chakra work, and then chanted the mantra for enhancing psychic powers for twenty minutes.

Around midnight, I attempted to evoke Erishkigal. It…did not go as expected.

I blooded the symbol Erishkigal had previously given me, and gazed at it while chanting the word of power I was also given. It did not want to open. I gazed, and chanted for around fifteen minutes with no response at all from the symbol. I turned my gaze to the incense, but I could see nothing within it. I closed my eyes to try to bring my astral sight online and I saw…

A dark, bleak landscape. Before me was a large wooden gate, which I knew instinctively was one of the seven gates to the underworld. I opened my eyes, and saw my room. I closed them again and was back in the underworld. It was a bit disorienting.

Erishkigal approached me. She was clad in a flowing gown the colour of blood. She bid me welcome and told me to walk with her. She spoke of some things that I am not at liberty to put down in this public journal, and told me there is work for me to do once I was “done with those silly angels.” 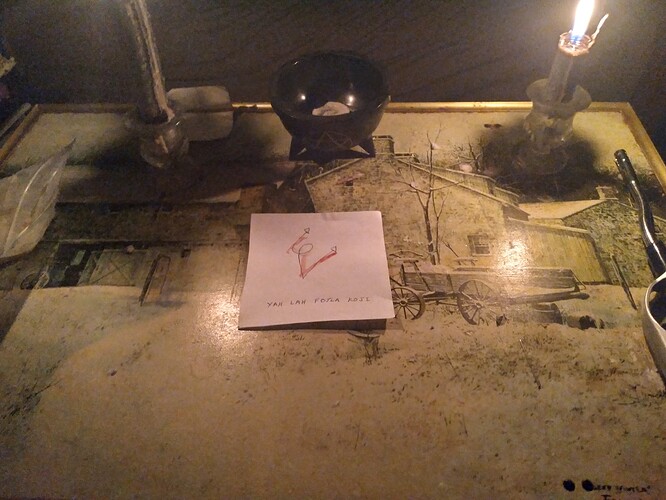 It was a very interesting adventure.

done with those silly angels

With regards to her work, this makes sense to me. She has always expressed as a Queen that dictates her realm, space, and cooperation.

But not as an off or on sort. If it falls within her purview. And she agrees…

Vibrated the attachment mantra for twenty minutes, followed by the god-self invocation mantra for fifteen minutes, and finished with the first HGA protocol.

In the afternoon, I performed ritual two from Archer’s book. It’s supposed to be done for 11 days so there are three days to go.

In the evening, I did a ritual from Alan Blackthorne’s book Sigils of Power and Transformation.

Meditated to a theta binaural track, but wound up falling asleep for three hours. When I woke up, I practiced the Lullaby method before falling back asleep to end the adventures.

A nice day, but windy. Mood was good.

In the afternoon I vibrated the energetic attachment mantra for twenty minutes, and followed it with the first HGA protocol.

I’ve been playing around with some different meditations and binaurals from YouTube.

And the adventures continue.