Amazing altar by the way

~very nice and all!

(But i guess that not the goddess ate that cake XD )

Thanks setting up takes a while but was worth it

Right I love the symbolism and the placement of things

But there are no LGBTQ in Irak, Afganistan, Bagdad, Syria…
BECAUSE THAT WOULD GET YOUR SELF KILLED!

There are but theyre probably in hiding. You can’t claim that there aren’t.

@Drachir Oh there is, they just hide it well! There also forced to get married to women but they know its a sham marriage. There are a few undercover pagans over there too lol.

Couldn’t have said it better myself, and you’re welcome

Actually we grounded into pieces and placed it on the earth and poured her wine offering on top it too.

Yes it would it’s terrible, you know here we are on the right defending the LGBT community and they call us homophobes, well where the fuck are all the SJW ? We are defending the very people that go against us, and why first off because we do the right thing because we are hardcore that way, second there are enough homosexuals within our ranks to make it worth our while to take care of our own LGBT Lincoln lovers because they may like the cock but they got our backs. Wait that didn’t sound right…???.. Sounded kind of gay…Lol

The problem i see with this LGBTQ community, is that those people tend todefend muslims as “oh so poor minorities” -they are a minority, and its good to not have any of those at all.

Polite reminder that working threads on here are not to be treated as referendums – whether they’re a spell to cause someone to love you, or a curse, we discuss a lot of controversial stuff and OPs should never have to waste time justifying their Will, and that also applies when they touch upon matters with social or political ramifications, Claidheam outlined that last year in this post and included comprehensive explanation and guidelines, all based on the existing Forum Rules…

Update: I see that in response to another poster, whose comment I have just deleted, I need to edit this to a not-so-polite warning - derailments and censorious replies on a working thread will not be tolerated, and suspensions and bans WILL be used for repeat offenders.

Drachir, I totally agree w/ you on that. We’re not asking LGBTs to just hate on anybody who might be Muslim, but just be more alert to the very real menace not only radical Islam (ISIL, al-Shabaab, etc.), but also, strict, traditional Mahometanism poses to them.

I’m glad this thread was made 'cause I had, a few years ago, made a similar thread on how to assist in solving the world’s problems in a magickal way. I had no particular course of action in mind and just pitched an idea, some were more or less receptive to. I’m glad this thread is receiving a nicer response and some action is being taken.

I’ve just realized the following… The Kingdom of Saudi Arabia, the Islamic Republic of Iran and the Chechen Republic (Chechnya) all officially condemn radical Islamic terrorism, the first and second even being part of the anti-ISIL coalition, yet all three countries deny the very existence of LGBTs (oftentimes forced into unwanted hetero marriage) and go as far as mistreating them and putting them to death!

This proves that it’s not just radical jihad that causes the problem, but also Sharia law and traditional Islam applied to the letter. There are LGBT-friendly, progressive movements in Islam, but those only represent a tiny minority of the whole Muslim world.

Here’s some news from Chechnya. Ishtar would sure need to visit that place…
http://www.gaystarnews.com/article/chechnya-president-

I, personally, have no problem w/ Gay Pride Parades and people parading in S&M gear… Most LGBTs, I think, do not even attend such parades, and most who do attend (LGBT or not) do not dress that way. I understand how completely undressing may not be appropriate (though I have seen just as much at the Mardi Gras), but leather and chains are just that—leather and chains!

To the OP, kiss-lamia-lilith… Can we actually win this fight? Chechnya IS currently undergoing a “purge” of its republic by killing as many “sodomites” as possible… That’s what Ramzan Kadyrov wants, and Vladimir Putin doesn’t seem much concerned by the news. Even Angela Merkel seems more concerned and pressed Putin to take action.

Very hypocritical of her considering the mess she put Germany in—two transgenders were almost stoned to death by three migrants, over a thousand women were raped, terrorist attacks occurred, etc.—, but she at least took some action. Putin’s own Russia is not too friendly to LGBTs neither!

And see… Chechnya, Saudi Arabia, Iran all condemn radical Islamic terrorism but all approve of mass torture and murder of LGBTs (especially those born males) within their own territories, which proves this type of actions is not limited to the likes of ISIL and that fundamentalist Islam is the biggest threat LGBTs worldwide are now facing. Just remember that Orlando attack!

Video interview with survivors of those concentration camps in Chechnya:

The problem is that we are becoming complacent, The new generation think they are accepted as a majority because of the media spinning that everything is safer now! When it is not! We need to re-educate and spread the message that the war is not over! and that we have the right to defend ourselves from attack!

That may mean going old school and carry a brick in your god damn bag if you have to! but at least you whack the fucker around the head with it!

That’s true here these things are not as big a deal but in other places people have real life and death opression. There are people being pushed from buildings and into camps. People need to stop worrying about safe spaces and triggers etc and focus on doing something about the people that are in real trouble. People that don’t have real safe spaces from physical violence and offensive language is the least of their worries. For them getting triggered is a bullet to the head. Homosexuals actually do get treated crappy by every group they are in and not just the USA. Everyone has a right to exist and it doesn’t matter what our political or moral or social views are nobody has a right to dehumanize another.

One of the things that bothers me the most is how ISIL members who have slain men accused of being “sodomites” are seemingly getting away with it.

More and more ISIL members are now returning to Western countries they may come from—and avoid any type of punishment!

See:
Convicted terrorist who ‘beheaded heretic’ on the loose in Belgium
Brussels judge ignores calls for terrorist to be arrested over phone call confession.
http://www.politico.eu/article/convicted-terrorist-who-beheaded-heretic-on-the-loose-in-belgium/

That’s how terrorists are now treated—like princes—, when patriots may get arrested, fined, kept from using social media and even go to prison for blaspheming or just criticizing Islam, Islamization, jihad, taharrush gamea and Sharia law.

What if one of those ISIL jihadists that murdered “sodomites” were to return or relocate to the West? Would they ever be tried? Would there ever be any justice? I have a feel most of them might have gotten away w/ it, and some are now defending jihadists’ “right to human dignity” and “a fair trial”. Would most of them jihadists even admit to all their crimes? Most of those crimes were not filmed and would be very hard to prove in a court of law.

If it were for them jihadists, there would not be one single LGBT person on the planet. Seriously! That’s exactly what ISIL has planned to do; they’ve repeatly admitted it.

And don’t forget the 49 slain at the Pulse nightclub by Omar Mateen, soldier of the Caliphate! And I’d add to that list of tyrants all those in Iran, Saudi Arabia and elsewhere that executed (murdered) people accused of sodomy. 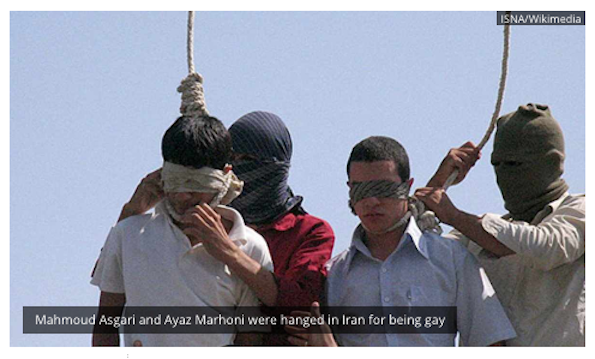 This above was in 2005. Now, in 2016: http://www.jpost.com/Middle-East/Iran-News/Iran-executes-gay-teenager-in-violation-of-international-law-463234

Still no change in Iran and most of those other countries. You’ll notice how those assassins often cover their faces not to be seen…Where are they now, eh? Having lunch? Making love? Enjoying life, slaying, committing mass murder and mass rapes while their victims are all dead?

Not fair at all! I wish all the curses of Lilith and Andras upon them. Amen!

Its starting but we need to put more energy into the spell. I will be planning a further ritual for this purpose soon. 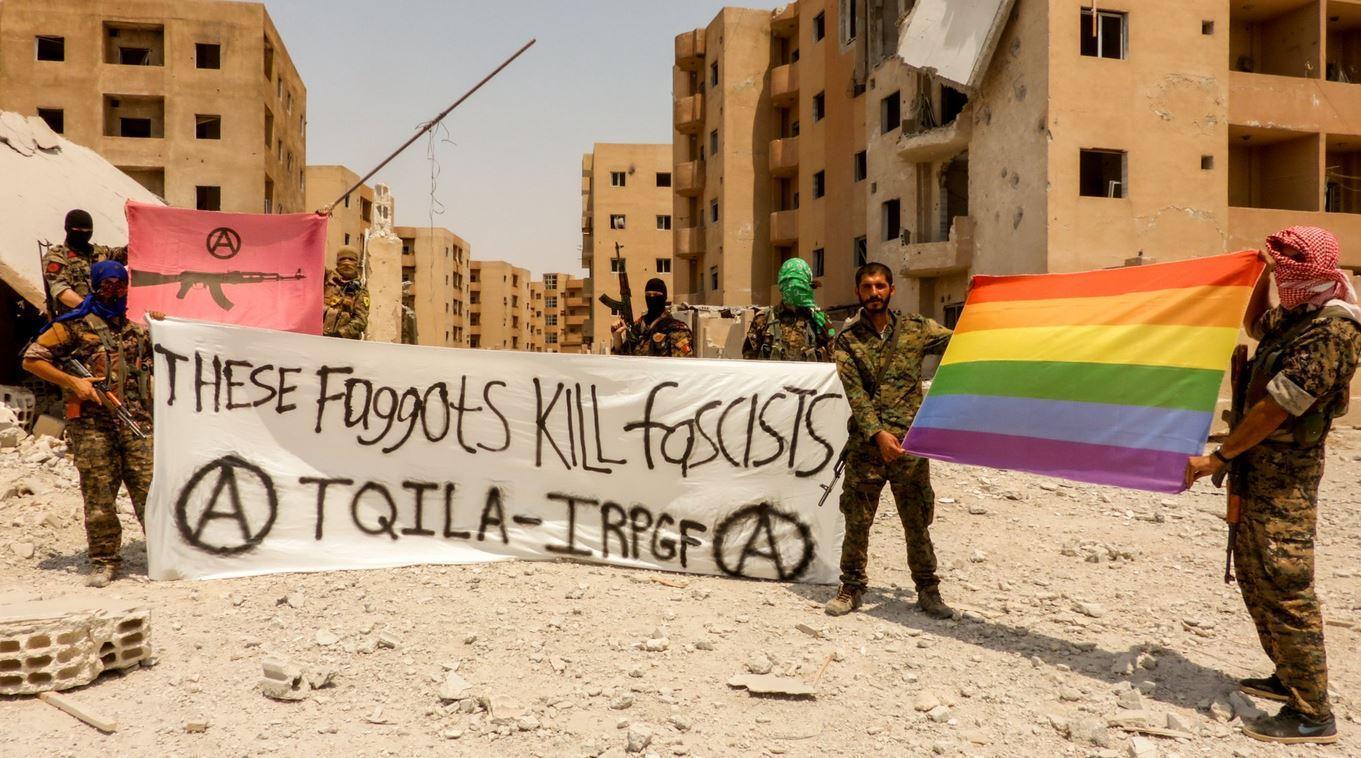 The Syrian civil war has unleashed untold misery for millions of people caught between an authoritarian government, Islamic extremists and bombing by foreign nations.

Count me in! Lilith, ereshkigal, Nergal and samael-samas are at our backs!

This is my favorite rendition of the myth of Ishtar entering the underworld. And this myth makes two cultural connections of homosexuality and magic: Native American and Babylonian.