I’ve been looking at invoking spirits into myself, I do not consider myself ready to invoke Goetic demons just yet. I do work with Lucifer as a teacher however.

Now I am drawn to Apep and have been drawn to what he represents long before I began seriously studying the occult. I have spoken to another who is pretty good with Egyptian mythology and from our conversation I considered that Apep might be a force, not necessarily sentient or driven by an agenda. A part of nature that just exists, like a storm not good or evil, just unstoppable. What is also interesting is the fact that both good (Ra) and “evil” (Set) unite to fight him.

I want to invoke him to learn and internalise the chaotic nature of the universe and my life and come to terms with it. I feel it would be useful to me to experience the chaotic abyss. Also to help me completely abandon fear and the human tendency to cling to the illusion of order.

I do worry however that this could be harmful considering it is such a powerful energy. Has anyone had experience with this spirit? Could it result in just harmful levels of chaos entering my life.

Also is his hieroglyph enough to use as a sigil, I imagine his element would be water. My situation makes it difficult to be entirely alone for an extended period of time. My idea for a ritual would be to take an ice cold bath until I am seriously uncomfortable and in an altered state, stare at or visualize his sigil and repeat his name, then to ask him to enter me.

I suppose the warnings are always about the 72, I haven’t heard about experiences with Apep, good or bad.

What kind of warnings? You mean in the books that speak of how to bind them and get yourself in a circle so they won’t attack you? Check a bit in this forum and you’ll see how many they have attacked

Yeah that’s what I mean, the 72 can be dangerous and require circles, I don’t feel ready just yet to get into the Goetia.

Apep I don’t know becuase there aren’t many reports about him. All I have to go on is a basic circle and perhaps the name of another ancient Egyptian deity as protection as he was traditionally drawn with a deity attacking him for fear he would draw power from his image.

Yeah that’s what I mean, the 72 can be dangerous and require circles,

Oh well, whatever works best for you! I haven’t worked with Apep but I know few people have. Good luck with your invocation!

I have worked with Apep, and he can misbehave quite easily if you don’t pay him enough respects or you do actions (in your daily life) that he despises…I wouls not go to him that easily.
Just because he doesn’t appear in the Ars Goetia it doesn’t mean he is all joy and laughs…

Personally i think that entity is “dead”, Set devoured him.

But you can look up The Temple of the Black Light, they have a pdf that has a sigil and invocation for Apep, as far as anything harmful, Apep mostly deals with nihilism and entropy, death. So that can be a little much if someone is not ready for it. 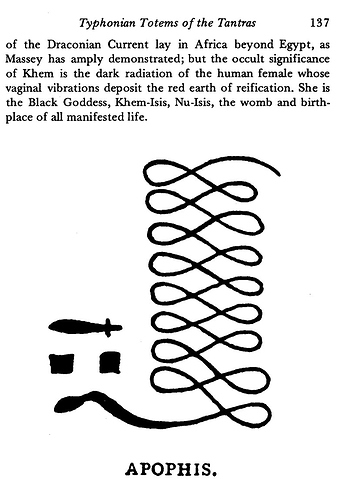 This is Apep’s sigil published by Kenneth Grant in the Nightside of Eden.
I had contact to him through this sign.
Give it a trial.

Thanks, what sort of actions does he not like? Also did you present an offering?

The Goetia Spirits don’t need circles, the circle can enhance them but is not necessary I’ve found.

Hmm invoking Apep, to me, would be like invoking Azathoth. It’s a powerful force so make sure you can handle it.

This is a good description

Becareful OP with bringing Death Energy into your body it’s Not like normal energy and if you’re not prepared it can cause you harm like sickness.

@Lappel_Du_Vide
Hey, I wanted to ask you if you did work with Apep? I got no answers for a while now, so I would appreciate any information about this kemetic spirit.

Personally i think that entity is “dead”, Set devoured him.

But you can look up The Temple of the Black Light, they have a pdf that has a sigil and invocation for Apep, as far as anything harmful, Apep mostly deals with nihilism and entropy, death. So that can be a little much if someone is not ready for it.

— I ACTUALLY THINK TOO THAT APEP IS DEAD, and addition to that, i think Set is dead too…

Seth, may be alive still, they dont wanna work in first floor(ground floor) because greys…

I have recently begun a practice dedicated to an understanding of the nature of Apep that may be beneficial towards anyone trying to work with the true, raw, limitless force that is Apep.

Firstly, I will speak on how I was introduced to the mystery of Apep, before I came to know of It.

Three years ago, I woke into a state of strong sleep paralysis. In that motionless state, I slipped into a vision of an “entity” I had never witnessed before. In the midst of a vicious sandstorm, a towering, almost worm-like entity was facing me. Its head was covered in slate-gray scales, a peaked and jagged head, the point of which terminated in a sharp beak of those same stone-like scales. It had no eyes to speak of. Beneath the beak was a massive open mouth, full of the same scales, truly cavernous and awe-inspiring.

The being suddenly unleashed an enormous cracking sound, a sort of bellowing detonation that is truly difficult to describe. I immediately felt a sense of such utter doom and dread, a certainty that I was sitting in the face of something unstoppable.

Another Egyptian deity presented itself following this portion, but that isn’t relative to this instruction.

After my vision, I was rampant on discovering what entity I had encountered. I had little to no experience in Egyptology, but stumbled upon the old stories of the flint-headed primordial entity, Apep, the very face of entropy and destruction. I researched Its mythology, the nature of the entity’s binding, the history of the universe before the Gods of Egypt came to be.

After a great deal of time fearing working with the entity, one day, I took the dive. Using Kenneth Grant’s research on Apep’s seal, and stripping away the inclusion of any other Gods on the rendering of Apep’s seal (to remove the filter and restriction of those forces on Apep), I forged my first talisman, using a human scapula segment, gold, and dragon’s blood. I invoked the forces of Apep to rest within the talisman, and after ritual dedication in the feverish spontaneity that I know to have been prompted by those forces, I put the talisman around my neck.

This next part is not to dissuade anyone from the pursuing of Apep, since following this, my rewards have been great.

Firstly, the sensation of the talisman as a conduit of Apep was invigorating. It was like being plugged into a wall socket of tension, like feeling a tearing ocean spilling through and trying to jut out in any direction it could. My aggression was immediately up, as was a sort of malevolence.

Within a matter of hours, I was in a car accident. A whole host of negative happenings arose, multifarious in nature. However, I stuck with the talisman and the current for two weeks, acclimating to the current. I constructed a charging vessel full of sacraments I refer to as the “Grave” that I use to charge my and any other talismans of Apep I create, though it isn’t inherently necessary over time.

Once understood and acclimated to, this current can be directed to do absolutely astounding acts of entropy and damage to the enemies of a Practitioner who works with Apep. I have been working with this force for some time now, and it is effective in producing calamities, curses, destruction, storms, and truly any realm of magick a magickian can apply their mind to (in more advanced ways).

Apep, I have come to learn, is in no way a traditional sentient entity. It is the raw force of energized chaos and infinite possibility that bears a psychical visage, given personality because of how it filters through the human psyche and the magickal hyperspace. It is pure magickal force, inclined towards the destabilization of systems as it encounters them. Apep is a face of the Void, a font by which power may be drawn.

My magickal practice has been greatly affected by working with Apep, and has evolved into a strange and wending tree of essences and deities, from Pythia to Osiris and Horus, a vast magickal system of personal understanding, or magickal virtues, is hidden.

I do hope this is in some way helpful.

Welcome @ExorcistNor It is a rule of this forum for all new members to properly introduce themselves, so please click the link below and tell us about yourself and any experience you may have in magick, such as what you practice, how long you have practiced, areas of interest, etc:

I buy a new book it’s the black pyramid - the dark egyptian magick of Apsetus
this book works with Apep and Set.
I wanted to know if there are people who know this book and have tried it?

That member hasn’t been around in years, but Carl Nagel is a well respected author, I hope you find what you seek.

S. Connelly wrote a book about Kemethic; you can look up that book in Amazon.com or ebay.com or google: Invoke Apep pdf.