I want to introduce a Faustian Spirit: Mephistophiel

I want to introduce to you all the Faustian Spirit Mephistophiel:

On that in german written page Dr. Faust explains firstly, that he called Mephistophiel first on a crossroad. Mephistophiel appeared first as an aggressive bear, then a polite lion and after this he promised to visit Faust in his study room.

Mephistophiel is explained as a teacher.
He taught Dr. Faust how to travel astrally
and other mentioned categories.

The shape of an old man is his friendliest appearance. He is ruled by Jupiter and is more positive than other Spirits for people.
Further Mephistophiel explains that he warns of accepting pacts. 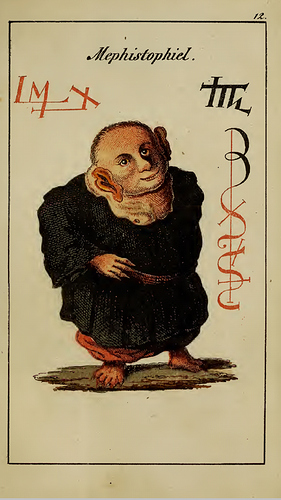 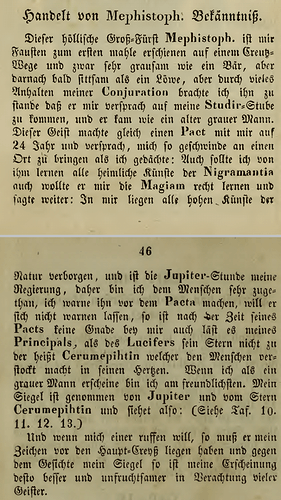 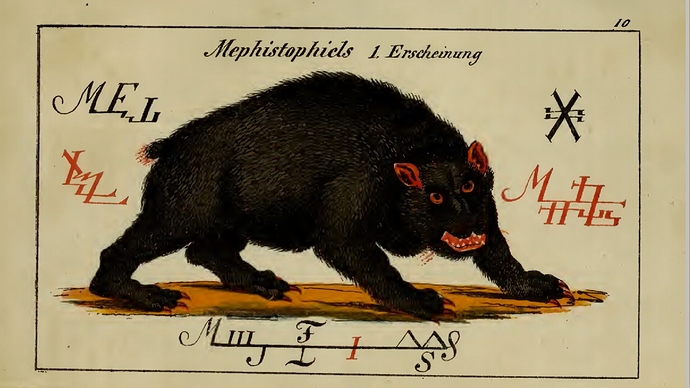 The “Throne Angel”
reigning over Mephistoph. is ZADKIEL. 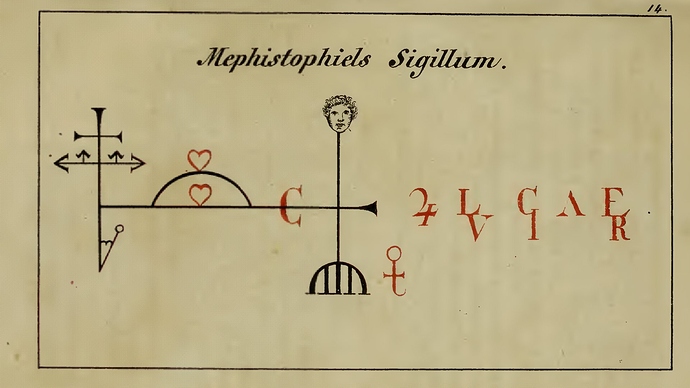 And we have this one, too:
For this one I have no idea which should
be his sigil. Faust is a bit confusing.
I would use the first. What do you say;
and see in the last? 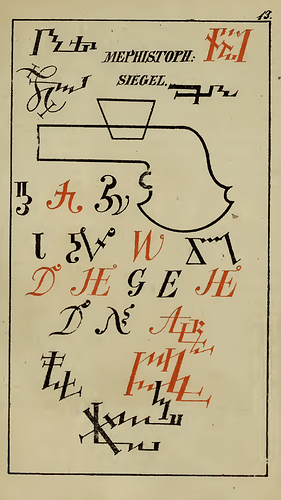 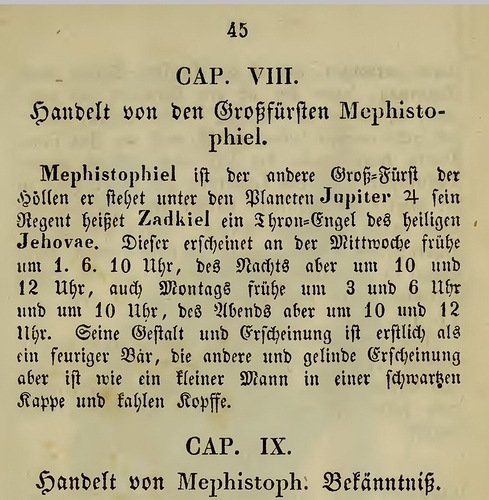 “The book of Mephisto” by Asenath Mason could also be interesting for you as a modern interpretation of the legend about Dr. Faust. She provides some rituals to contact Mephistophiel, but I never tried to contact him. He is considered as a dark initiator for the magician.

I think the translation is a bit different. In my opinion, does the text say the demons aren’t the ones who make you cursed(damn you) but a specific star named Cerumepihtin. So the spirits and pacts aren’t a bad thing at all but the influence of the star makes “them” bad.

memphistoteles is just metaphor of, living manifestation of creator, getting back to him, by “selling” soul to it, to find a way back to tree, like it was in eden

We have Goethe’s work “Faust” and the faustian Grimoire. Goethe wrote about Mephistopheles and meant the Devil and Johann Scheible wrote 1849 ‘Dr. Johannes Faust’s’ work (“Magia naturalis et innaturalis”) with the Demon Mephistophiel.

@DerAmateurHexer
I had the book but found it not really helpfull.
And did Asenath Mason write about MephistoPHIEL? I thought it only was about Mephisto(pheles?) ?

Thank you for comment on this! Yes, the Book of Asenath Mason is written about Mephistopheles.

@Lukjanof damn! I forgot about this lol you sent me a link to this but I never read it until now INFACT what made me remember about about this is last night I was watching this anime called

Demon City Shinjuku and Mephisto was 1 of the characters I liked a lot…which by the way has this happened to you before? You’re like watching a movie or anime and a spirit name just happens to be in it? have the book Mephisto I read it but never done any of the rituals in them

I don’t like the book of Mephisto.
For me only Mephistophiel is legit.