Has Lucifer appeared to anyone else in this way?

Yeap and it’s the same level as for example rituals from Asenath Mason. Really genuine. He can write his own grimoire. I love that he shares the stuff and help people learn.

Lucifer appeared to me in a dream as a professional dressed in a black (pinstripe?) suit. Afro-American man, early forties, clean-cut, well groomed with a slight smile (smirk?) on his face. He was in a “law firm” with Belial.

That was the only time so far, that I have seen him.

I’m a fan, but I’m torn, it’s gorgeous but so fussy I can only handle it in small bites. Very nice on men though: their masculinity balances it well I think, it’s just too much on women for me.

Some of these very nice vests are Rococo - a whole bunch of revival styles get lumped under goth though these days, not that it’s a bad thing, at least they’re available.
https://www.devilnight.co.uk/84-gothic-vests

Uh, last time I saw him he was robed and hooded, as the often are… I’m not into appearances so they don’t bother as much with me, I guess.

I haven’t worked him yet, but Raven (Secrets of the Gods on youtube, she used to post here) mentioned in one of her videos that Renaissance Jester aspect/appearance.

The Quicksilver of Light and Madness – The Laughing God

With Samhain now receding (although that said, a truly cunning witch knows how to make this blessed Sabbat extend for quite a while into November!), I want to make the post I alluded to in earlier …

I love this, thank you

he came into my room one night while I was sleeping… as a hooded man in black robe… but he appeared to me in third eye as a African American male and another time looking exactly like my boyfriend…lol. 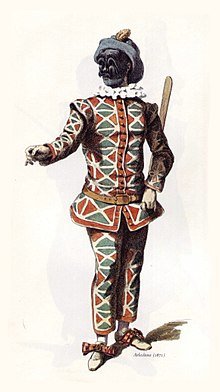 Harlequin (/ˈhɑːrləkwɪn/; Italian: Arlecchino [arlekˈkiːno], French: Arlequin [aʁləkɛ̃]) is the best-known of the zanni or comic servant characters from the Italian Commedia dell'arte. The role is traditionally believed to have been introduced by Zan Ganassa in the late 16th century, was definitively popularized by the Italian actor Tristano Martinelli in Paris in 1584–1585, and became a stock character after Martinelli's death in 1630. The Harlequin is characterized by his chequered costume. Hi...

i thought you mean like batman’s Joker’s Harlequin, for the first brief moment.

Lucifer in his standard form with his regular sigil i still avoid to a degree,
even tho i’ve successfully manifested him before.
I went for Sol Invictus Specifically,
so in exact detail i may have conjured a differnt,
yet similar solar deity back then.

With the Jester Harlequin i mainly see the peakock, like Melek taus being represented.

I think having a look at Melek taus may at least help clarify the image for yourself a little more clearly.
Having him come up in that form definately is a good sign,
since that expresses his glory and beauty,
both atributes which shine from his very core. 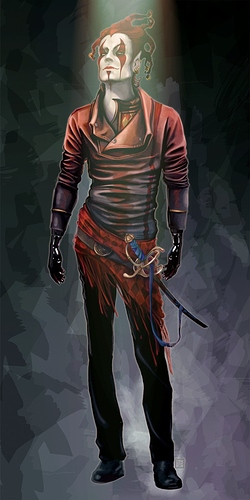 Yes! Like this but blue, not red. Taller and much more beautiful bone structure.
He chose at this time to agree to what I wanted of him If I agreed to listen and do what he advised

Thanks so much. x

Well, i can definately see that make sense.

Nice, thank you very much for sharing.
And yes, it’s kind of logical, he can only help you when you allow him to.
The good old healer’s issue.
No matter how much someone may be in pain,
it’s only when they open themselves,
that true healing can take place.
Similar in working with a guiding Demon like him.

Thank you. This was about 2 years ago now and I always wondered as nobody else commented anywhere really about a Harlequin type figure.

I deleted it as it felt a bit too personal and I felt a bit weak talking about it. thanks anyway.

All i know, is that i can watch the suicide squad again and again,
uhh, i really like the witchcraft in there.

And it’s such true!^^
We are Power addict’s!
We love to overcome and overpower.^^

But most importendly:
the Film boldly Says:
Once we where worshipped as gods.
It’s time to raise again.
^^

I’ve seen him as many different people including a very sexy version of the Jared Leto joker character. He enjoys keeping me guessing.

I’ve never had him appear to me personally like that but others have. So you’re definitely in contact with him. Also check out the Rites of Lucifer. In the grimoire you will find a whole ritual for Lucifer’s “Jester” Harlequin-like mask. Now as for my experience he’s come as a blazing illuminated god of light and fire, a fat little cherubim, a tall black cloaked-hooded individual with his face covered in shadows (which Belial has appeared similar but with a skull-like face). When I was in my 20’s he appeared to me as a black dog. But I just recently just realized that it was Lucifer in the background all along.

Thanks. This was 2 years ago he appeared to me like this and I evoke him weekly now. It is the only time he showed himself as the Harlequinn.

I don’t see him anymore with the exception of gold light. I feel him, hear him sometimes and he always answers my requests without fail so I can’t complain…

Maybe this can help you spike some of the gnosis which you’re recieving currently:

he always appears to me with long blonde hair, white skin. He looks super similar to satan from devilman for some reason

Welcome @Localfroggikid It is a rule of this forum for all new members to properly introduce themselves, so please click the link below and tell us about yourself and any experience you may have in magick, such as what you practice, how long you have practiced, areas of interest, etc:

Yes, a tall blonde, beautiful man with a chiselled face like those Roman and Greek sculptures you see in museums.