I have no intrest in the norse worlds but i was always drawn to giants. The forum dosent have much the only info i have is some google muthology and their complete square from abramelin witch is

In all my years practicing the occult I have very seldom seen anything about giants whatsoever , you can try Norse mythology however and pray to those spirits .

Few are close to them but i know there exelent alies. Well i did read theyr mythology and no i never pray it seems a low thing to do for me at least

Yup , I don’t think you’ll find much advice , honestly hearing of spirits like that is a rarity for me The giants of the pre-Christian mythology and religion of the Norse and other Germanic peoples are a tribe of spiritual beings whose power equals that of the two tribes of gods, the Aesir and the Vanir. Their character, however, is very different...

Have you tried searching for Jotun or jötnar not ‘giant’, or specific names?

Thank you for the article well since you ask im intrested in the father of giants ymir i think ,suttong , nott , skrymir , hugi and the sauare’s giants i want to acess the full potencial of the square . E.a says when they are summoned they start making noise damn i have to summon them somewhere else i use the rooftop as a ritual space for most workings they wake up the neigboors :3

I don’t use squares but I wouldn’t recommend mixing methods from different currents before being comfortable with the techniques from both. I have E.A.s Norse Magik course and at no point does he recommend Jewish ritual methods to contact them. Since the Jewish offshoot, xtianity, is responsible for largely wiping out Norse paganism and murdering it’s peoples, (the viking raids were a response to xtian invasion, not the other way around) I’d tread very carefully there. The Norse entities have a lot of, ah, personality, and can be quick to be offended.

But the ‘giants’ are basically anthropomorphized forces of nature so maybe they don’t care.

The best source is to read the Eddas yourself. The scholar Jackson Crawford has my favourite translations so far, and he recaps and explains some of the Eddas on his YT channel that has his name.

When you think of Norse Shamanism and Sorcery many think of the Aesir and Vanir Gods. Some perhaps even consider the Rökkr (Primordial forces such as the sun, moon, day, and night) but there is one aspect of our path I think has not only been forgotten but condemned as forbidden, dark, and useless. I disagree with all of this. As Shamans and Magicians our goal is to surface our God within but we are not Aesir or Vanir. As such we must understand that while we honor the Aesir and Vanir, work with… 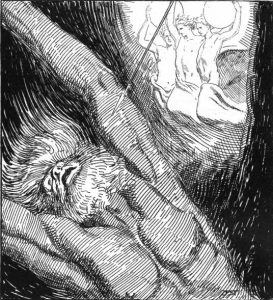 Ymir (pronounced roughly “EE-mir;” Old Norse Ymir, “Screamer”[1]) is a hermaphroditic giant and the first creature to come into being in the Norse creation myth. As the first giant, he’s the ancestor of all of the other giants – and, since almost all...


Arith Harger’s YT channel is both spiritual and scholarly

Skrymir is a giant that lives in Jotunheim, (the home of the giants) in Norse Mythology, he loves to play tricks on the Gods by using his magic.

Nott is the night personified. Not a Jotun but a Goddess.
(But Loki is both, so… I don’t think it’s all that fixed anyway, Snorri’s version was a snapshot of an ever-evolving system that was also heavity edited with a xtian bent)

Suttung the Giant in Norse Mythology

Suttung is a giant in Norse Mythology, giants are huge and tall beings that mainly lives in Jotunheim (the land of the giants)

Hugi - little known character in a story about Thor
https://thenorsegods.com/tag/hugi/

I’ve experienced the Jotun Gods, specifically Mimir on my explorations to Mimir’s well in etheric projections. However, I also came across one of the “sons of Mimir” but it was a female Jotun Goddess.

I have only worked with one being who has Jotunn blood in him. The wolf son of Loki Fenrir/Fenris.
He teaches the rule of shadow: embrace all parts of yourself, even the darker ones

Aurgelmir, Ymir is the mightiest, try to converse with him if possible, His body is the earth, Gaia.

@Mulberry thank you for the links . Amm sorry for asking what do you mean by jewish ritual ? Is there a different system for norse summonings ? I was planning on following the elementary principles maybe ask raziel for assistance and call the giant of my choise. The only 2 systems i know of are e.a’s system witch is my primery and the pathworking witch uses visualization for summonings. Different persinality what do you mean if i evoke one normally and act with respect isent that enough ?

@Velenos was waithing for you how would you desrcibe them as spirits compared to angels and demons? Also do they have any rivalitys that youre aware of ? Also anakim is a name of a spirit or a team ?

@Son-of-Serpentine ymir is intresting however i dont know what hes goals are same for the giants. For me to walk my path with a spirit i must know what its intentions are both in general and to me thats a rule i faithfully aply . I cant tell why im suddently intrested in learning for spirits in a pantheon i dont know but im determined to evoke at least one and have a conversation just so i know where they stand on my path

@Velenos was waithing for you how would you desrcibe them as spirits compared to angels and demons? Also do they have any rivalitys that youre aware of ? Also anakim is a name of a spirit or a team ?

I consider the Jotun to be the equivilent of primordial and titan Gods as they were the ancestors of the Aesir and the primordial forces of nature. So I would describe them as part of the race of Gods.