For those of you who haven’t seen my last post about this, I’ve been trying to ask Marbas, who I believe to be my patron demon, to manifest as a visible apparition or audible voice to dispel any remaining doubts I have about whether any of this is real. I’ve made a little bit of progress, but I want to ask you guys for input on next steps to go further with this.

I evoked Marbas late on the night of the full moon in total darkness with only candlelight, and this time I burned the correct incense for him, which is storax from Liquidambar orientalis. Really hard to find around here, but I got it. I also lit three orange beeswax candles (his colour is orange) and four tea lights in mercury glass (not actually mercury, but symbolic because his metal is mercury).

Most importantly, I now have a brass pendant with Marbas’ sigil engraved into it with black inlay. I put it around the 3 orange candles and positioned them so it was taught, and so the pendant faced me. I put the incense on charcoal disks in front of the pendant so that I would be viewing it through the smoke. Here is my setup: 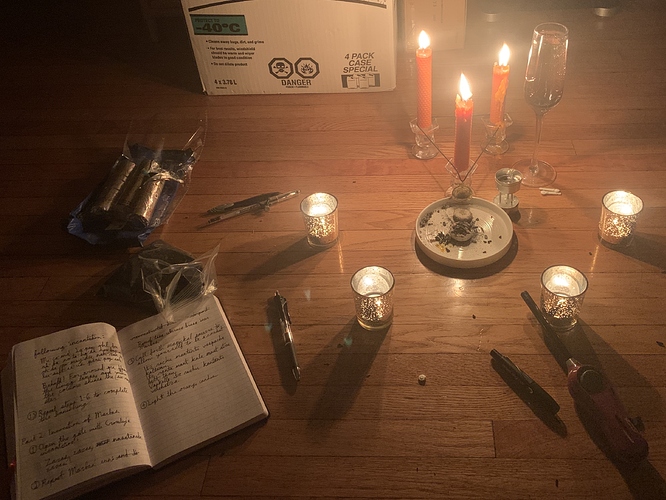 I started with the Rite of the Averse Star, which is a demonic version of the LBRP I found on here, to banish everything else that may have been there. After doing that, I opened the gate by vibrating Crowley’s incantation, “zazas zazas nasatanada zazas”, and afterward began chanting Marbas’ enn while staring into the sigil through the smoke. I felt his energy wash over me like a hand fitting into a glove, with me being the glove.

After this, I pricked my thumb with a lancet and anointed his sigil pendant with my blood as an offering, along with a crystal glass of water and the hard-to-find incense. I got the intuition to hold my arms up diagonally to the sky to call forth his spirit down into myself, and did exactly this.

Later, after many chants, I wasn’t seeing anything in the smoke, so I got down as low as possible on the floor and gazed into the reflective surface of his sigil pendant, seeing it through the smoke and with the reflection of the candles in the mercury glass. This is when things got really interesting. I saw faces, many faces, the most stable of which was decidedly male and had piercing green eyes. There were no green objects or sources of green light nearby.

Also, I noticed afterwards that one of the candles melted strangely, and it looks to me like a cloaked man putting one foot forward. Do others see that, or am I just seeing things? 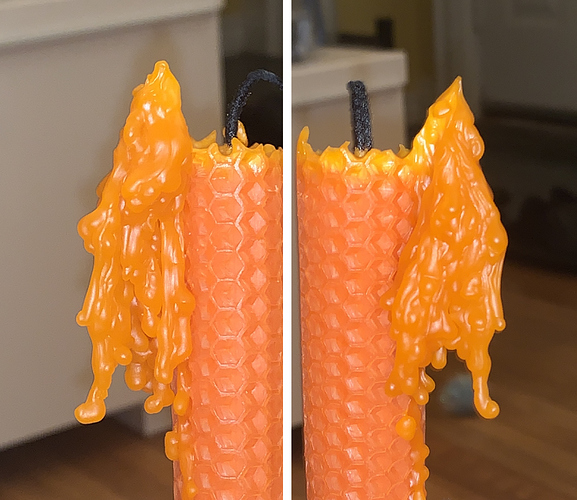 This is progress, but does not yet meet my goal, so I want suggestions on what I can do differently or additionally during my next attempt. To be clear, the goal is to either see a stable apparition (lingers in place for several seconds, not just one frame of a video) or hear an audible discarnate voice clearly as if it’s there in the room with me, not just in my head/mind’s voice.

That’s awesome, keep up the work ! I plan to do it soon, your posts might be an inspiration

Very interesting post indeed. I see the figure in the wax clearly. It does look like a figure for sure.

I have achieved a full apparition in smoke and incense that was visible for a few shots, so in real time more than 10 seconds. I still have he photos and they are very clear. The spirit was Glasya Labolas.

I asked the spirit outright for it and reviewed photos later to see.

I will bookmark you as I am very interested.

I have achieved a full apparition in smoke and incense that was visible for a few shots, so in real time more than 10 seconds. I still have he photos and they are very clear. The spirit was Glasya Labolas.

That’s very interesting that yours was stable for that long! It seems that most things people report seeing are just in a single frame of a video and then gone.

Would you be willing/able to share those photos, either here or privately by PM? I know every spirit and every practitioner is different, but still, I want to get a feel for what is possible/what I am looking for.

I decided to show you as a pm if you want to see and message me. I don’t have spirit permission and don’t want to offend ,but I have them ready

I love the smell of storax - i burn it often for Hekate also - i read it was found often on her ancient altars.

It sounds like a great experience! I love the figure in the candle wax which i see also and your setup. Will follow for the suggestions for sure.