I’ve used EA Koetting’s Manifestation Elixir and worked rather well, however I needed something more.

Something different, with a little more kick so working with my dark gods I was given each ingredient and their reason for using it.

This elixir can be used to anchor the entirety of an Identity to a talisman, vessel, ritual area and objects.

It has various components which not only anchor and house the power, form and can of a spirit.
It also magnifies the materialisation and manifestation of the power, force and spirit.

The ingredients are as follows.

Menstraul Blood - In Magick menstraul blood has extraordinary power, it holds the energies of the blood moon for one. It’s a liquid of pure feminine power, it also carries the life force from a woman’s eggs and empowers the blood with that life force. The menstraul blood feeds the spirit, it also releases powerful psychic vapours will gives off a scent bringing the spirit forth.

The native Americans considered menses to be at the height of the females power.
Menstraul blood has properties of sustaining, that’s what it does with an entity it’s sustains it’s presence and manifestion.

Semen - This liquid is too extremely powerful, sperm its self is nessercary for creating another human being. Semen itself is literally a seed of manifestation, it gives life to the entity not creating it but giving it actual life force.
Semen itself is a astral liquid of power, this offers power into the whole operation.

Semen is the ingredient which empower and energies and magnifies it.
Its also a liquid of masculine power, the aggressive masculine energy is what anchors the spirit.

Of course both liquid together create a elixir of power just on their own.
The sexual currents of energy are great for these workings. Sexual energy in itself has a magnetic property, drawing in all power. The sexual current is also a current of attraction, attracting what ever you’re intentions maybe.
For example the intention of employing total power, the entirety of a spirit, it’s energies and intelligence.

Amethyst - This gemstone is to be crushed down into a powder, to be added to the elixir.
Amethyst doesn’t only have lunar energies but also solar energies. See Amethyst is connected with the third eye, if you’ve seen the lotus of the third eye you’ll notice two petals.

The sun sits on one petal, the moon sits on another, once Shiva united the masculine solar energy and feminine lunar energies it released a incredible destructive, transmutative and creative power. 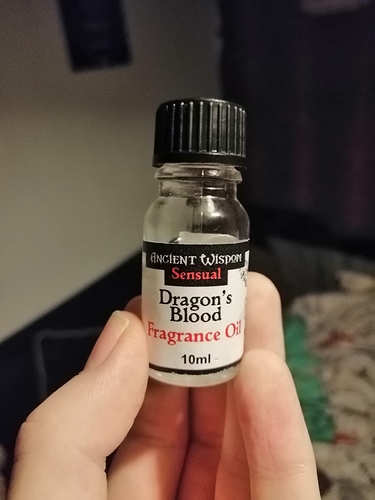 Pinch of salt - Salt in Magick has been used to draw in various energies, salt can be used as a conductor of energies, we need to conduct the energetic matrix of the elixir.

You can actually just use cooking oil as the base, I’ve done this for years when I had no olive oil near me. It works like a charm.

Blood of the magician - Blood excites spirits and compels them, notice I used the word compel and not command nor force.
Spirits feed on blood too, many demons in general when asked what can magnify their manifestion they always state blood.

The blood will compel the manifestation to anchoring itself, the blood will also feed the power and the spirit. Blood itself is known as a sealing catalyst, for countless years when doing Magick it’s always been said to seal it in blood.

Don’t forget adding you’re blood is adding in you’re own power into the elixir.
You’re very own prana, you’re energy and power is contained within this liquid.
Not to mention the power of you’re ancestors flows through you’re blood.

So the blood empowers, charges and seals the calling of the spirit and the anchoring of that said spirit and it’s power.

Dragon’s blood oil - I was suggested by Azazel to add a few drops of dragons blood oil to this elixir he didn’t give reason however.

I created two elixirs one with dragon’s blood oil and one without. The one containing dragon blood oil was much more potent.

Once all ingredients have been combined, stir until the salt dissolve and continue to stir the powder for it to dissolve as much as possible.

Seal it up and keep it at room temperature, once done wrap it in black cloth this acts as a energetic protection to stop outside energies from tampering with the elixir. 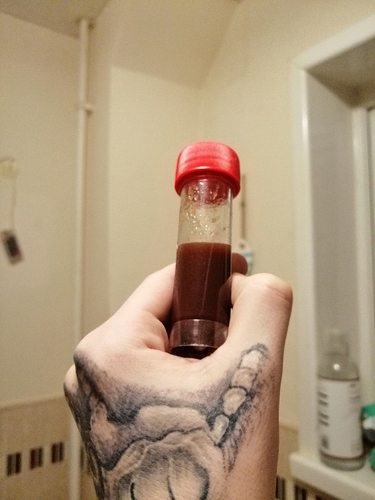 I stood in my universal circle and placed the minature universal circle upon a table.
Lit three tea light candles, called on the powers of magick through the summoning all magickal powers incantation. 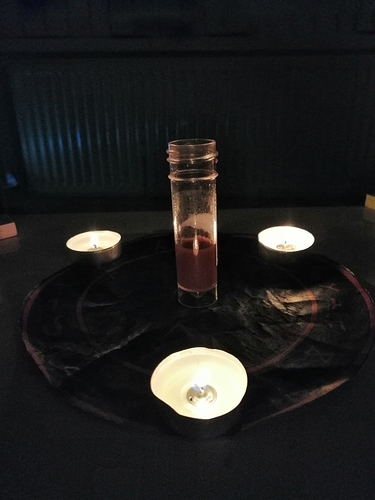 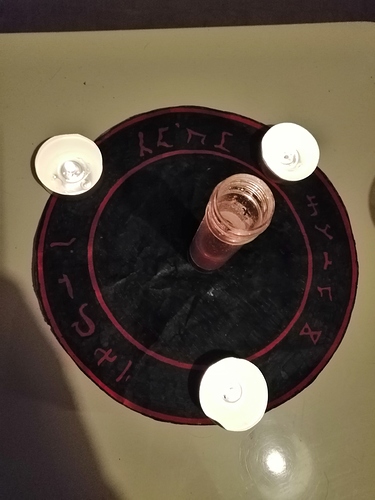 Once I felt the power descend into the room, I kept repeating until it reaches a critical mass.
Inhale deeply pulling the power through my Zeal Chakra I pushed all that power into the elixir.

The minature universal circle was already anointed with semen and menstraul blood.
The candles wicks was anointed with regular blood.

Once I infused all the energy into the elixir I used my tibetan singing bowl, allowing the high vibrations and a mantra giving to me by a demon which is ‘SANK’TAH’ to increase the power of the elixir. 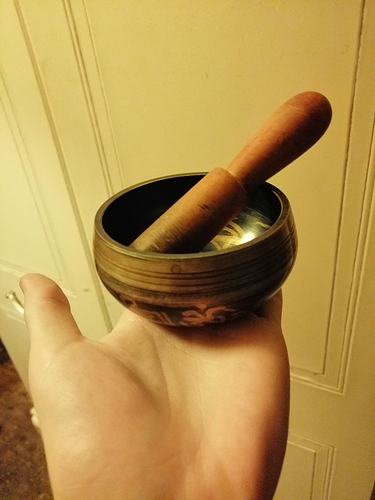 This is extremely potent thought I’d share this powerful tool to add to you’re Magick toolbox.

Thank you so much for the recipe!

Will the elixir also be effective when i only add menstrual blood, without adding semen?

And could i also use the incantation of limitless power to enchant this elixir, or does it only works with the mantra of SANK’TAH ?