Best magick to get a new job

What’s the best magick to do from all of your experience to get a new and better job?

And yes I know I can use the search bar.

demon for jobs is belial and use the search bar. talk is cheap. =o)

I would flip you off if I new how too

And I already have and have a few ideas

I agree with calling on Belial, but in my experience, he really kicked my ass in my job hunting experience.

I can’t go into detail cuz I don’t know who might be reading, but if it weren’t for Belial sending me 6 hrs away for a job interview, I wouldn’t be retired & comfortable right now. He put me through so real shit but I ended up coming out better in the end than I was to begin with.

Thats awesome Belial is a sweetie, just makes ya work for it.

go take some judo class. then you can flip me.

and then you have to pay me as making contact is considered harassment unless i’m paid. lol. virus situation making everyone in need of money.

What makes you think I don’t already know judo? eh

I think I have an idea of what I want to do. Should be interesting.

u said you didn’t know how to flip me. lol

Gonna try this never heard of it before now…just sent out an application.

Oh look I figured it out

Best way to get a job is tenacious, unrelenting, percistance: meaning show them your hungry, sell yourself, smile, be polite, honest, and bug them until they give you a definite ‘Yes’ or ‘No’.

It’s what my Grandma’s told me to do & it’s what’s worked for me nearly every time.

Example: I showed up every day, at one place, the same time (like clock-work) & called. Found out the mangers schedule so I could be there when they where there.
Did this for about, 2 weeks, every day. Finally, just as I was about to start casting a wider net, a voice told me to check in, just as I was walking buy. My feet seemed to guide me & know where to go before my head did; I was just along for the ride. Walked in, and finally (after so many near misses, like ships in the night) the hiring Manager & I crossed paths.

The moment I walked in she said, “we were just talking about you & wondering where you were! Can you start today?”
Forgoing paperwork (for a later date) & the usual orientation procedures I was given a shirt, name tag, & on the job orientation & training. And, they said what set me apart from everyone else & really stuck them in their minds was how hungry & persistent I was to either get the job or told to simply f#*k off (they didn’t even know how old I was so my looks didn’t matter. Save that I was always neat, wore a smile & soft & light hearted colors: as I always avoided wearing black when checking up or applying for jobs … Unless it was a suit).

I asked Utu (also known as Shamash) to get me one.

Next day the phone rang, my brother told me about a Job opportunity he heard about through a friend, which wasn’t even advertised. I’m still in that job and love it.

Ask and you shall be given…

I already have a job I’m an office manager. The problem is I work 7 days a week. And the stress is getting to me. They actually sent someone away that wanted to pay on their account , made them come back the next day because I left early and no one else could get off their ass and do it. They know how at least one person that was there knew how. They are just that damn lazy.

Thats why want another job. 7 days a week because other people just want to sit on their ass is bullshit.

I got a weeks vacation coming up and I really don’t see how they are gonna make it with me gone. I left early yesterday .trying to keep my over time down and they called 3 times. Even when happen to not be at work I’m still at work.

Its really not that I can’t do the magicks to manifest a new job. If I could manifest a house I’m sure I can a job i think more the problem is having the time.

I’m exhausted and my diabetes and low hemoglobin does nothing to help matters.
If I just work what I’m scheduled I get 42.5 hrs a week. But i have to go in on weekends because no one else can do half the stuff I do and no one wants to learn so that puts my hrs way up there. Going in every day at 5:30 am and staying til 1 or 2 is killing me.

I don’t even get to spend time with my son.

This is my problem. I’m being worked to death. And I know I can find something else.

Nitika is who you are seeking!

An angel whom is specialized on wealth, many people have seen successes with Nitika, including myself. 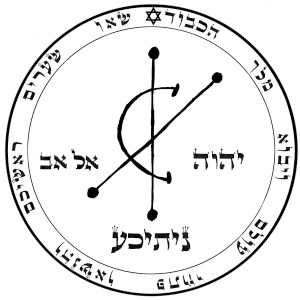 Sigil by Gallery of magick here