Are YHWH and the Demiurge/Yaldabaoth two different beings?

The fact that this is happening is Fucked up
I’m glad I know whats going on behind the scenes.

Just had Belial confirm this Just now.
He said to not give in.

Same here, before I met Beelzebub, I was never really sure what was really going on behind the scenes, but when we started talking, my entire belief system was flipped on its head, making many of my speculations invalid, but I couldn’t be more grateful for everything he’s taught me and shown me and what he will teach and show me in the future! Finding the Truth is a beautiful thing!

@Robert @AlphaC how would you personally fight The Demiurge? Do you fight him actively? 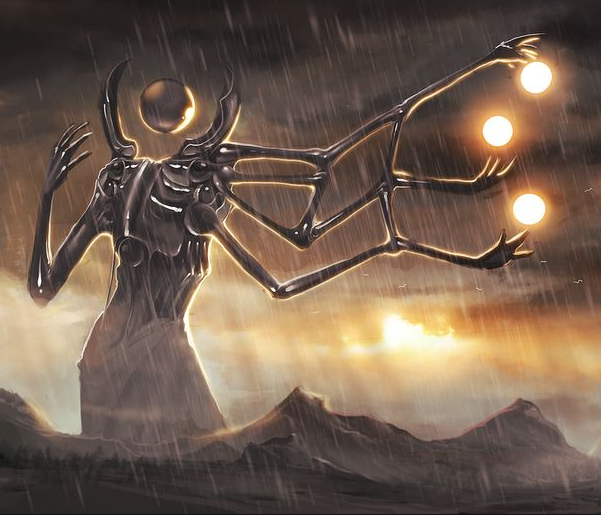 Beelzebub laid out a ritual for 23 of the most powerful sorcerers to conduct which will remove Yhvh’s power over the human race, he told me “look to the book of revelations, it is actually a ritual, as you read through it, I will be with you to help you extract the true ritual from it, which will put an end to Yhvh’s kingdom permanently, and usher in The Infernal Empire’s reign on earth!” So I read through it, as he instructed me to write down how to conduct its encoded ritual. I plan on rounding up the group of 23 (including myself) who will be capable of executing it properly within this year. That will be the final battle against him.

But to a much lesser extent, to fight his influence, just burn a Bible, a Quran, or a Torah, or just the simple phrase “fuck Yhvh!” Works well too!

Very interesting. Thanks for sharing. I do have a feeling that humans are waking up. That The Demiurge’s grip will be no more in about a century or two. Like completely.

Right now, his grip is a lot weaker than it used to be, but it’s still there. It will take some time before we and future sorcerers banish him and his influence entirely.

Indeed, the awakening is a slow process, and with more people practicing magick more than ever in recent history, his power is definitely decreasing!

When the time is right, I will make a post on here as an invitation to any sorcerers/sorceresses who feel powerful enough to be a part of this ritual!

I gotta bible to burn <3

They very much are one in the same and they are the one we refer to as the desert troll.

I like to refer to YHWH has “Annoying cunt”

YHVH is the mechanical consistency of the cosmos, and no more than that. It’s not even the name of a being, it’s more like an algebra equation. Anyone speaking on the behalf of this being is lying because “naught but silence can express” its function, to dredge up some old hermetic poetry.

It looks bad, but if the souls felt bliss then I think it’s kinda good.

Are YHWH and the Demiurge/Yaldabaoth two different beings?

According to the “Bible of the Adversary,” Yaltabaoth (not Yaldabaoth) is a serpant god with a lion head, and is Lucifer. The power with Yaltabaoth is that is is the black flame bearer. He is Lucifer the Angel of Light, and knows darkness.

According to the “Bible of the Adversary,” Yaltabaoth (not Yaldabaoth) is a serpant god with a lion head, and is Lucifer. The power with Yaltabaoth is that is is the black flame bearer. He is Lucifer the Angel of Light, and knows darkness.

The more I read things like this the more I am convinced that these spirits are “just some dudes” and not our great cosmic archetypes of light/darkness/other.

As “just some dudes” we should treat them accordingly and blast them the fuck off OUR world if they fail to serve our species’ needs.

And there is the argument that everything and everyone you meet is also a reflection of your internal self, as you go around co-creating your own reality, so we might do well to be very wary of religions which have elevated harmful beings who preach genocide and oppression, because something in that group, at that time, was receptive to that message.

Sometimes people need a command to act against their principles, and do it reluctantly; other times they’re merely waiting for a green light on their deepest desire to be destructive.

With the “just some dudes” theory, your gods and their teachings are a spiritual snapshot of your own personality.

Therefore, taking the acclaim heaped upon ANY entity by the people who serve it, is really just hearing them elevate their own psychological quirks and pretend their own form of madness is a universal truth, and passing the responsibility upwards as though they never had any real choice.

Which is really fucked up, when you think about it…

I was just revealing what page 72 of the “Bible of the Adversary” said.

In regards to you mentioning something about being aware of groups preaching genocide; it’s interesting you mentioned that, bec 5 minutes ago I just got done reading a blog from a “satanic” sect that was talking about eugenics, and a cleansing, and opposing the “cosmic order,” and the demiurge, etc…

Who is the demiurge? Is that the same as the demi-gods, i.e., the 7 planets?

In regards to you mentioning something about being aware of groups preaching genocide; it’s interesting you mentioned that, bec 5 minutes ago I just got done reading a blog from a “satanic” sect that was talking about eugenics, and a cleansing, and opposing the “cosmic order,” and the demiurge, etc…

The Bible elevated the command to genocide other nations given to Israel by their god of war in an another era, and turned it into a kind of worldwide belief that genociding the “other” was a righteous act, instead of simply tribal warfare and supremacy along ethnic or territorial lines.

A lot of “satanic” people kept the exact same belief structure and just attached new names and faces to the beings.

Once the belief you must destroy or be destroyed yourself has set in, reason and rationality fly out of the window. Especially when you believe Authority in the form of “the” God has greenlighted it: The Milgram experiment on obedience to authority figures was a series of social psychology experiments conducted by Yale University psychologist Stanley Milgram. They measured the willingness of study participants, men from a diverse range of occupations with varying levels of education, to obey an authority figure who instructed them to perform acts conflicting with their personal conscience. Participants were led to believe that they were assisting an unrelated experiment, in which they had t...

Who is the demiurge? Is that the same as the demi-gods, i.e., the 7 planets?

I think it’s just a title and archetype people go roiund looking to attach to various beings, and then the belief factor of magick kicks in and makes it seem real.

if you convinced yourself you were being followed by tall women in pink shoes, eventually you’d start to notice them, and they’d act weird around you.

IMO same reason why a person can’t simultaneously travel to Morocco and Manhattan, they are about destination.

In the past few days I’ve seen a lot of conversations and crossfire on here, about why people identify with the LHP, why LHP people don’t like RHP people (and, of course, vice-versa), so I wanted to put some definitions up here, because I think a lot of the time people are talking at cross-purposes, or simply not understanding what a person like me means when we say we embrace the LHP & actively, passionately, shun the RHP. This isn’t to lay down the law as to what people can mean when they say…

Gods? Not sure about that either.

Yhvh and Yaldaboath/the Demiurge are the same entity. Trust me, Beelzebub absolutely hates Yhvh (and so do I), he made it very clear the Yhvh and his angels are spiritual criminals…

Look, I know it’s inappropriate, but I just have to say ‘Amen to that’!
In terms of human representatives of the loving, heavenly father; think Stalin, Mao and Pol Pot.