Today I’ve had a Dream, and I’ve just woke up with intense thoughts,
memories inside me, from this “Dream”.

In this Dream, I’ve talked with my beloved Patron (after long weeks, finally) Abaddon. Hm… no, it wasn’t really “talking”. He just spoke to me - oh, Dear, He is really likes just telling things. 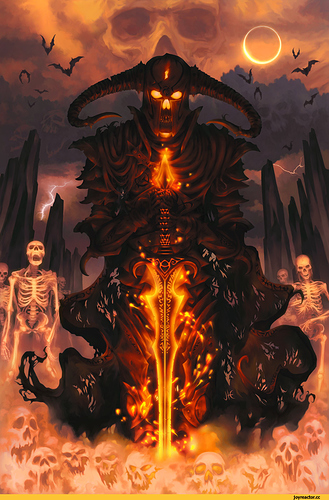 I’ve had several questions, about my shields and curses - because I simply can’t sense curses at all in negative ways (even when I knew about them, just like in the case of my JoS ex boyfriend’s), and some of them backfired, or can’t reach me. Lucifer told me things about this when I’ve asked for, but I felt that He want hold this “job” to an another Deity: which was Abaddon, my beloved Patron.

Why would you waste these guided energies towards you with keeping them outside, if you got the power to make them yours, and use these as your own?

It makes sense. Not only because it is logical and clearly a very good strategy even when it seems “passive” (trust me, it isn’t - you’ll see, why), but because based on what Abaddon told me that:

What does it means?

It means that you can grows faster when you are able to “swallow” every incoming energies, make them yours, and if even when these energies are stronger than you momentarily, you will able to deal with them more faster, you just have to do it, take your time and grow until you’ve became enough strong to - if you want - stop that mess.
…Or you can decide to use these curses, and grow faster while you can focus on your practices, or whatever you wish for or want.

After all, I can see in my everyday life that this strategy was always mine, I’ve brought it with me - and things connected to this has always enthralled me - I felt them close to me. But even in the phyical world, I’ve got the feeling that I have to feed from everything and everyone (plant, animal or even humans: no matter) - and no limits: only the cause!

You are able to sense them. They’re gave you a big power raise.

(And how I remembered back, yes, He was right! I was able to sense these positive changes every times - but I’ve focused on senseing “negative” ones. I was wrong. But He was right… from an exact point on my life, I’ve started to do it, just didn’t realized what am I doing really.)

Thank you for this knowledge to You, beloved Abaddon!
Your presence and attention Honor to me.

I have started to work with Abaddon a couple of weeks ago. He is awesome.
Thanks a lot @Nagash

I have started to work with Abaddon a couple of weeks ago.

Just a ‘few’ people work with Him - I mean, He isn’t that “famous” Deity like Lucifer, Belial or Paimon -. I can remember the time when I wanted to read a little more about Him before I “accept” His call (this was the reason why I found the BALG Forum, anyway - because of Him). I spent two days in the BALG with searching for things on it about Him, but I found nothing really important, just a webpage and a Sigil.

Yes, He is. He isn’t that kind of Prince who will handle you ‘gently’ in every situation. His lessons are almost like (continuous) ‘challenges’. But these challenges coming not all the time from Him, but from yourself.

He is perfect even in teaching you to know yourself, but in a very different form. And what about His words? Well, He isn’t talk too much, at all. But when He does, it will destroy your whole actual fantasies and misbelief within seconds, and He will rebuild you. And god damn it, I’ve wished for this kind of Mentor!

He is my Patron from Marc 6. We’re talked 3 times in the first weeks. Then He suddenly disappeared (around when I did the Dedication Ritual towards Lucifer). I was so confused first, but today I know very well what happened. He is still here with me. Every moment. He observes me without any break, and I know that if He will talk to me again, will have a big effect.

Within the last 2 months, we’re talked only ~4 times + this.
Is He a bad Mentor? - Absolutely not!

I hope the best for You!

is abbadon the guy to go to for curses, i feel like all the demonic kings can do some crazy shit but dont know who can do specifically what

Every Deity has their own strong suits. Some of Them (for example Abaddon Himself) will getting bored very fast if you want to work with Him about something what doesn’t interest Him.

Fyi, the op is a known larper. i would ignore whatever fantasy you encounter here

For me there is a specific spot on my body the energy needs to be guided too after consuming it.

Well damn… I thought this was a good post too.

That was the problem. People sometimes got sucked into her fantasy land narratives and got led astray.

Frustrating. There was some truth in this. In the simplest terms proper transmutation should be able to take a curse and turn it into something more workable.

To get more in depth see this (which funny enough people also told me was larp).

It means that you can grows faster when you are able to “swallow” every incoming energies [curses], make them yours,

This is describing the practice of telet. By not fighting the curse but by allowing it to attach as strongly as it can intentionally you will gain a burst of energy (think about the power of your suffering). I know this to be true as I can eat negative energy and transmute it and be OK. Telet is the act/power of assuming control through relinquishing control.

Transmuting the curse is a separate act however.

Whatever didn’t emanate from her backside was plagiarized from others. In the end, the plagiarism is what was the final nail in her coffin

Yes I dont want to seem like I am encouraging larping or plagiarism, but even a broken clock is right sometimes.

Yeah only that her…ehem…above quoted enlightenment came after a video from E.A. who invited his haters to keep hating him cause he was feeding off them, then a certain person with whom she had a weird relationship of love and hate told her the same thing, then suddenly few days later BAM she posts this claiming she was always doing it “from her birth”.

That Moment When 3 General Discussion

Well I guess we doing it live then over the goddamn internet I did prove my power to you one… Two… My ego did not blind me. I know the difference between my fantasy and what is actually going on and where my power is legit at and where there is a shit ton of kinks in the armor Three… If ya hate me then I welcome it all. That goes for every person on the forum. I live for the Hate and enjoy it. Four… If my existence is such a problem, why not take care of it for your “Gods” since you like …