WTF is this symbol I was given it in possession

I think that so many of us seeing it in unrelated ways has to mean something, and given the spirits involved in Ak’anak, probably something… cool.

@Drachir what is the symbol on your altar (yes this might be a dumb question, I have encyclopedic knowedge of SOME things but not all!

I normally place myself as a symbol of power instead of having a symbol on my altar as i’ve been told the best symbol is your will.

The seal [an face/aspect(?)] of Lilith,
as the spider goddess of the qliphoth. 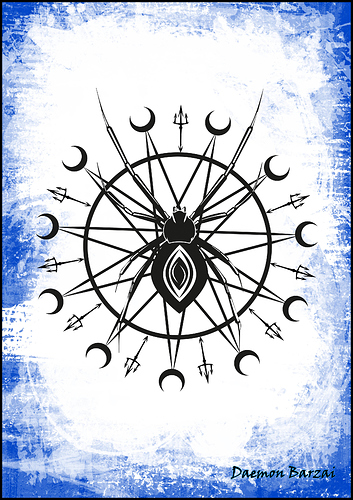 Its allmost the same symbol, but with an eye or vagina on the spider, and the star has11 points instead of 7.

Is there an relation to this?
https://encrypted-tbn0.gstatic.com/images?q=tbn:ANd9GcSQp_A3O4S9Oge2m-2LsqcXz_V-7TC3GuHi2j6dZ6fDmMIUvZ7_

What did the septagram changed in meaning?

Right… interesting. I may have seen it before but it slipped my mind WJAT the symbol was, cheers.

Interesting item - I saw arms of Lilith (aspects of active power) in a big theogenesis (for all) prophecy dream, 3 years ago.

Now something that looks like a seal for her is popping up everywhere.

I know its a stretch,
~but… If you connect the points and the bars from the sigil for the qlipha Lilith/Nehemoth
(like seen in: qlipothic mediations), you end up with a septagram.

Juuuust me guessing, but;

~Could it be, that this is the same symbol, but instead of the connection to the whole qliphoth, you just get drawn to the first qlipha??

Sure, Lilith herself is all over the qliphoth, but maybe does she call you this way,
for a more direct approach.

Why would she call me there

Sorry, i don’t know her that well.

*Even with having the assistance of an SUPER ALBINO LAMA,
am i not able to tell you that. :’(

I feel that since it is so close to Liliths seal that it might be worth contacting her about it. Just an idea.

Lilith has been a relevant deity in the last 20-30 years - through the misleading feminist agenda, and several forms of magic branches - and she’s definitely growing in power and influence once again. And since it’s been known for a long time that the veil is getting thinner and thinner, her relevance and presence is growing indefinitely. And since I’ve been working with her for several years, I know she loves the attention.

I’m not surprised that several magicians have seen the same seal, independently from one another.

You drew it, only you know the answer?

Let me rephrase the answer, there’s a piece of you in this, no? If yes then you should be able to figure out the answer for yourself.

I believe you are correct. The sigils are a little off, but close enough.
The site that has an invocation for her is
http://www.ascendingflame.com/materials.html

The Rite Of The Spider Goddess.

it has a strange effect on me

I agree that it could be one of the sigils of Lilith given that the image resembles what others have seen or drawn. Feeling a bit weird here as I type just getting a little deja vu, not that I have seen the image before, but weird.

I would suggest keeping the image in the way you have it drawn with the 7 points if in fact that’s the way you saw or how it was drawn out for you under possession. Whether it is 7 points or 11 doesn’t matter at this time. These are just signs or clues pointing to what can be expected in the future, in a week, a month or even years from now. Maybe some future qliphothic workings with Lilith or someone else I don’t know.

I won’t mix and match sigils and tie a name to the image since I don’t believe these deities make mistakes when drawing things out. But just for reference, the spider to me resembles the venomous black widow an aspect of the deities nature on the web/tree of life/death. The 7 points could be aspects or masks of the deity and/or its entourage and maybe even corresponding to the 7 chakras. I’m just throwing the chakras out there because you shouldn’t just discard the 7 pointed symbolism the way it has been drawn out for you. I wouldn’t necessarily align the 7 points with the planets since it won’t make any sense with the other symbols found in the image. The Tridents can symbolize its intensity in power and the Crescents are the energies it aligns itself with. I’m stating this because many of these symbols can be found with other systems but basically pointing towards left-hand path type of workings to be done!

This was probably useless information but maybe someone else can find something in it.

Just curious but was the spider intentionally colored red by you or who?

i was finally able to push past the kundalini experience …that was experiencing everytime i looked at this symbol. it was very difficult and tiring.
but when i finally pushed through and went inside there was complete darkness except for a silver spider web.
i was in the web and the spider bit me. i was wrapped in its silk and it consumed me someone but when i re emerged i was the spider.
i kept seeing a door to one side…but i couldnt hold it long enough to investigate that.