Why they don't let me die?

Two weeks ago I was ready to kill myself.

March, monday 9th, about 8pm I went through 5 drugstores in order to get a venoclysis equipment, the last thing I needed to get my way out. I tried a few times the last decade (I’m 24 now) and had everything planned one week earlier. I knew I was going to succeed. But I couldn’t find the damn thing.

Now, here are the reasons why I’m asking for your help, I’m superlatively pissed off with this situation and I’d like to understand why this is happening.

1.Friday 6th I received a message from a tarot reader from Richlands, in the other hemisphere. I barely knew of his existence, and that’s just because of his fb page. 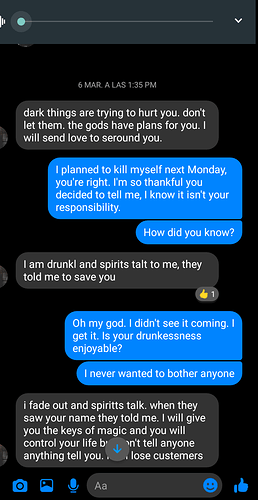 He gave me some cryptic information about Astaroth, a guide if you want, to find it within the self, and to control my life, in his words. I translated it to my native language and studied it. Same evening it smelled sweet, my bedroom was full of it. Later I confirmed with him, he executed a ritual for me. I’m worthless, he didn’t have to do it, I felt guilty asap. That was interesting I admit, but by Monday I was devastated again.

I had my sign, surprisingly, right after the meeting. I can’t say what is it, but it happened.

Still, by Friday I was a mess again, but didn’t have the will power to do it. I had the venoclysis equipment by then.

The conclusion is: I’m miserable, I planned to die, and the only day I have the strength to achieve it, everything is against me. Even a sorcerer from other country is involved, my friend arranged for me a lovely gift once this quarantine is over, and I’m just pissed off because every time I’m decided and have the means, something or someone appears and gives me hope. And a few months later everything goes to hell and I’m broken in pieces again. I feel something or someone is using me, or wants to preserve me for entertainment.

Welcome @Soren It is a rule of this forum for all new members to properly introduce themselves, so please click the link below and tell us about yourself and any experience you may have in magick ie what you practice, how long you have practiced, areas of interest, etc:

Easy answer: They maybe have some interest on you, or they appreciate you.

You have a destiny and there is something special and unique about you. You’re supposed to be here for a reason.

Lol I have also a mentor who had the same story when he was young… Trying to kill himself 8times failing terribly… Was even brought back after a NDE… Bro I assure you… You won’t succeed in killing yourself… Just suck it up n. Move on…
Research on astaroth and appreciate that such a, deity is, even interested in you… One who, is, “never to be summoned”…even gives a shot about yer life

I’m sorry you are in pain friend. I think you meant to be here at least for awhile longer. I had a very dark time decades ago and made a will and figured I’d shoot myself in the head. It feels like a lifetime ago. I googled “reasons not to kill yourself.” I’ll never forget the top reason - you can always just do it later. Hang out with us for awhile. It sounds like you need to be here, at least for now.

Honestly, if you truly wanted to kill yourself, you would of done it and not dragged it to a specific date, then to change your mind again. So I’d rethink your decisions, there’s so much to life, I wouldn’t end it so quickly. You can get through this!

I have this issue. I mostly gave up trying to leave many years ago.
If it’s anything like the reason I have, it’s because I made a pre-incarnation pact to be involved in something, basically kind of a group working.

It took me years to figure it out, because to understand the reason meant learning enough to have the language and knowledge to reach the conclusion by myself.

A couple of pieces that I needed were to be able to communicate with my ‘higher self’, the entities that made me, the team I signed on with, and develop the skills for and form a cosmological view that supported that work.

To put it LHP way, I am bound. Bound to live.
Could I break the bindings? - not completely sure. I have broken a lot of bindings in the past, created at the human level, and I never saw this one show up in vision. I haven’t exactly tried, because I’m unclear of the consequences at this time, and while I’m ambivalent about being human, I’m not hurting in a way I can’t handle.

I just want to drop this in here, many frequent forum posters will have seen it, but new people find the forum all the time:

If you, or anyone else, are having thoughts of hurting yourself, it is important that you discuss them with someone who is qualified to help, such as a crisis helpline in your country. Please visit this link to find the appropriate number:

If you feel that you may be an immediate danger to yourself, please call your local emergency number or go to your local hospital emergency room right away. If you are unsure of the right number to call, please visit this link and call the number next to the country where you are located: In many countries, dialing either 1-1-2 (used in Europe and parts of Asia) or 9-1-1 (used in the Americas) will connect callers to the local emergency services. Some countries use other emergency telephone numbers, sometimes also depending on the emergency service. Some but not necessarily all emergency numbers are listed below. Maritime Emergency Service - 19; Gendarmerie - 118; National Gendarmerie - 122 Road police - 122 (incorporated into 110 in some cities) Forest fire (in some cities) -...

Here are some additional contacts, also for anyone else who finds this topic and is feeling the same way:

People who have a helpline or other online resources they have found useful in their own location are welcome to send me the link and I will add it.

Almost every country has a similar crisis line and people who are waiting to hear you out, and help as much as possible.

This might also help, if you can’t talk to anyone right now, no matter how supportive:

Thanks for the answer, that would be lovely actually. Still, I can’t trust yet.

Oh, but you don’t have to, trust is not earned in one single day.

You’re supposed to be here for a reason.

I’m trying to learn what is it, I wish I was unique. That was so sweet, I thank you a lot.

8 times is a lot, did he find what was going on?

You won’t succeed in killing yourself

Thats hard to swalow. What you shared with me is usefull, however. Thanks, bro. Thanks a lot.

“never to be summoned”

I know very little about Astaroth, online information is biased af and the only place I’ve found so far with coherent data about it is this forum. Of course I didn’t know people is not supposed to summon it, I’ll keep searching. Thank you again.

I just have major depression. However, I donate blood often and in my country every citizen is universal donor, thanks for the concern.

Hang out with us for awhile

Thanks, you’re so kind to me. I like this place. And I’m sorry you had to deal with those feelings, hardly we could say someone deserves to exist like that.

you can always just do it later

I’m holding to this. A shot in the head sounds quite fast, why did you desist?

It was all about logistics, I was provided with norepinephrine the night before so the only thing left to get was this equipment. Thanks for the motivation, I appreciate it.

I made a pre-incarnation pact to be involved in something

I never considered a thing like this was possible. To break bindings without getting into the main source to be throwed to existence again could be a legit way to solve this issue. I’m considering this deeply.

I needed were to be able to communicate with my ‘higher self’, the entities that made me, the team I signed on with, and develop the skills for and form a cosmological view

Lately I’ve tried to communicate with mine, and is a whole cryptic experience. Last time I asked how much I had to wait to get the results of a spell I made in january, it said “Una vez sembrado y enterrado, 42 horas aproximadamente” or “Once sown and buried, approximately 42 hours” and I didn’t get it. It named Damballa consistenly two weeks ago, and other things I can’t even remember. Thanks a lot, your experience is very useful to me.

Thanks Lady Eva, I’ve read a few posts of you (Magic with hands specially) and I thank you for the concern. I’ve had professional attention before, thanks.