Why are demons of the goetia depicted as ugly?

I was wondering why the pictures of demons in the lesser key of solomon look really ugly and evil? The pictures put fear in people like me. I watched a video where it says that Ipos and Anubis are the same entity. is that true? I am excited to hear your opinions.

If you want scare away people from something/someone (because you don’t want them to figure out the truth), you’ll give them a creepy, ugly and evil image about that thing or creature, and of course, false informations.

Thank you for your fast reply. So was this illustration created to put fear in religious people? So demons do not look like this ?

I think it’s because that’s how the writers of those books pictured them, it’s really that simple. Demons’ lover will tell you how beautiful they are, Demons’ haters will tell you how ugly they are. In both cases it’s personal perception. The same with Angels and any other Gods.

Demons are spirits… spirits do not have physical appearance. They choose to appear to humans the way they want us to see them, or they use the image we believe in. The writers of the Goetia were probably religious, that’s why they pictured them the way they did, based on a religious point of view, not according to what those Demons actually look like.

Do not forget that Demon haters isn’t working with Demons.

So they got no experiences and true “images” about Them.

So, what I wanted to say (what you already did anyway and I did before) that They’ve got no “true” appearance, but even then, some people just “imagine” Them.

Yes, just like @Nagash said. What better way to scare a child from opening a closet if you tell it that there’s a hideous monster hiding in it?

“Demons” can appear in many ways, although they usually have a few main appearances that most people get to see. Sometimes they deliberately choose a frightening or even repulsive form in order to put a point across (or even put someone’s ego in place), sometimes their forms can be abstract like light or a formless shadow, and sometimes they appear very attractive. Their true form, whatever it may be, is energetic and not physical (as we know it) in nature and therefore we cannot grasp it.

Do not forget that Demon haters isn’t working with Demons.

Not necessarily, Demon haters work with Demons sometimes to force them to do what they want or to banish them or torture them. The majority avoid them, but not all.

The ones who wrote those books were Demons haters who worked with Demons and experienced them. Otherwise it’s pointless to use their sigils and incantations or their grimoires in magick at all because they would be a work of fiction or at best can’t be trusted.

The ones who wrote those books were Demons haters who worked with Demons and experienced them.

Maybe if someone want fuck with you - and you’ll know it - you won’t appear to him as a beautiful being.

So, what I wanted to say (what you already did anyway and I did before) that They’ve got no “true” appearance, but even then, some people just “imagine” Them.

Christian and Jewish demonology. How do you get people to follow your god?
Show that demons look evil and ugly rather than beautiful.
Its to make people fear them rather than work with them

Maybe if someone want fuck with you - and you’ll know it - you won’t appear to him as a beautiful being.

That’s what I was saying, they choose to appear to people the way they want. People can believe which is the “Real” appearance based on their love-hate-beliefs… but at the end of the day, the reality without bias or judgment, they appear in many different ways.

ok i understand what you guys are saying. so demons do not have a physical appearance they are spirits and are energy. they choose how they appear to us. so if our intention is to “do it for fun” or disrespect them, they might appear in this form. but i truly have a good intention and believe that they are friendly beautiful beings, they will appear like that?

Show that demons look evil and ugly rather than beautiful.
Its to make people fear them rather than work with them

Well, I mean there is part of Christian biases in some of the depictions, especially in the Dictionnaire Infernale. I mean, King Asmoday looks terrifying in that(at least he did when I first began my path) 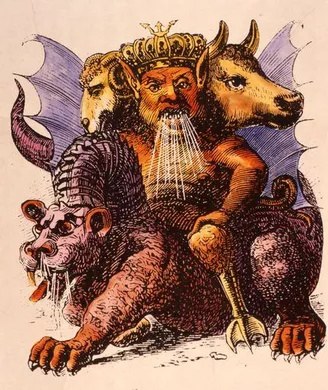 At least when I first began my path, the depictions of Goetia evoked great senses of fear into me

I understand what you mean, totally agree with you. But notice that almost the same pictures are painted in the Grimoires used by almost all black magicians. Even the ones who worship Demons but they choose to ignore them and only focus on sigils and incantations. That doesn’t mean they do not exist. The magicians who wrote them were either Jewish or Christians or from Jewish/Christian background - you can notice that from the Divine names used in those books.

True true, many things when I first got into the occult and magick, I notice many prayers to the Abrahamic God in preparation before evoking the entities

how did you overcome your fear to work with demons?

i am still programmed to be afraid of them… but i wish i didn’t have this fear, i would love to get to know them

I watched a livestream from EA Koetting before and he talked about meditating in the darkness and after he ended his stream with saying “Alash Tad-Alash Ash-tu” I sat and meditated in darkness and said to myself “What have I to fear about them?” Then I evoked my first two entities from the Goetia-King Paimon and Glasya-Labolas.

What use is fear if fear is a limitation?

Eventually I did evoke Lucifer as well-he only appeared to me as his sigil and he talked philosophy with me.

You also have to keep in mind-SPirits are incorporial beings. Demons are spirits. They’ll take on any form that they think you are able to comprehend