I’ll put some of what i put in my introduction here for context. But i would like to find out more but every thing on google seems to be tainted by the Christian paradigm.
From my intro
“The other day on a Facebook group I saw an illustration of what appeared to be a woman having ritual relations with a very Baphomet looking creature. It really stirred something up with in me. So I began to explore the erotic sensations welling up within myself. Somehow it felt very healing and empowering. Overall I felt very good about the experience. I woke up the next morning with a new magnetism but couldn’t explain. Like I was supercharged. The malaise and heaviness that I normally walk with had peeled back and I felt revitalized. I went about my day and I had a good day and I came home that night to find a coyote sitting in my parking space. In the school of thought I come from coyotes are Bringers of Omens. The coyote ran off and as I began to walk towards my house I saw the silhouette of a dark being. Blacker than night. Like a black hole of a silouette I’ve been warned about such things and instructed to be firm in boundaries expressing they are unwelcome if they mean harm.
So i did that, i went into my house, and went on with my night. The next morning, i wake up to a dead quail on my doorstep. Immediately I threw on my ritual garb, and did a cleansing on my house. I confided in a dear friend, and she told me that i probably opened myself up during my erotic fantasy…i really hope thats not the case. Anyways,
Hello, I’m here to learn new ways, cultivate my gifts, and meet others doing the same.
Any thoughts?”

Bapthomet is metaphor or absolute, absolution, in my opinion cannot be achieved by one singular being /male or female, but aboslute male and female together, could resemble bapthomet.

Hey thanks, so what do you think that means in relation to the experience i outlined?

The Baphomet is a modernized corrupted version of Pan, he is a living entity, you can say prayers to him and ask for visions among other things.

I like that! My friend had told me that if i interacted with baphomet would bring negativity into my life. I can get on board with pan more easily i think. Less controversy…

Baphomet brings growth, Expansion, power, Chaos, creativity, healing and much more. Is one of the best to invoke

No , Pan and Baphomet are the same entity .

fast conclusion to this, bapthomet is not an entity.

there are not “same” entities, try to get it in your current.

What are you going on about? Someone’s posting on FB about sex with baphomet. Give me a break. Who is baphomet? You could ask Dan Brown… A fabrication created by king Phillip to get out of debt with the templars who he had executed stealing all there estates, property and money.

Although the figure of bapthomet used was taken up by many occultists starting in the 19th century in reality the so-called baphomet was a mispronounced Mohamed.

Baphomet is a fabrication created to frame the Knights Templars by King Phillip of France and a misinterpretion of what the crusaders heard there muslim opponents yelling before battle hundreds of years before which was Mohammed!!

Phillip decided to have the Templars arrested as he was in debt to them and charged them with heresy. Amongst other things, the Templars were accused of homosexuality, desecration of the cross, and the worship of the bogus Baphomet. Many Templars made false confessions after being subjected to torture.

The bogus Baphomet never existed but is the supposed demonic entity allegedly worshipped by the Knights Templars who later became a symbol for Satanic worship.

There’s already a huge thread on this topic here:

Is Baphomet is a real deity who exists or just fiction? General Discussion

Is Baphomet is a real deity or just personification of human deep desire???

All this is well known in myth and legends, check google and other resources:

Baphomet (/ˈbæfoʊmɛt/;[citation needed] from Medieval Latin Baphometh, Baffometi, Occitan Bafometz) is a deity that the Knights Templar were accused of worshipping and that subsequently was incorporated into disparate occult and mystical traditions. The name Baphomet appeared in trial transcripts for the Inquisition of the Knights Templar starting in 1307. It first came into popular English usage in the 19th century during debate and speculation on the reasons for the suppression of the Templars...

Right. I did check Google, im more interested in pre-knights templar info. The KT stuff is all i could find on google.

No , Pan and Baphomet are the same entity .

No, they really aren’t. Pan is Pan. Baphomet is a modern egregoric Godform representing the union of opposites and the ultimate attainment and ascent of the Magician.

I’d argue that Baphomet is also associated with man’s understanding of nature through the eyes of alchemy as well, where pan is more of nature/wilderness as it is, regardless of who is viewing it.

The Baphomet is an egregore used to achive dualistic enlightenment

The pimp of edgy teenagers and angry youths who think burning churches will allow us to usher in an era of peace while in reality all it would amount to is making tons of people angry.

TL:DR: He is Satan and encourage people to attack Christianity.

So I have a question for you guys. I am new as you know and know very very little when it comes to these beings and what they mean. You guys state he’s just a energy form to represent a thing or/and quality of the magician or from the NT, yet I just did a cleansing and called on the beings I work with. I then called forth any being that wished to aid in my growth and to aid me in getting to my highest form. Of all beings Baphomet came. Yes Iv seen pictures of him/her/Baphomet, but never read anything on this person or origin. So how can just a representation pop up plain as day and basically say I will help you. Just saying that makes no sense at all. And to also answer the question, no I know that was not an imposter or just my mind. And to add I was getting my space set up for deep studying and to get my GED. So I found it interesting how this happened and yet he’s supposed to be nothing more then a representation.

Ive recently started working with baphomet. Many people have different views on him/her. Aside from the knights templar crap, satanists use it as a representation of satan, wiccans have used baphoment as a representation of the dualistic male and female architypes in harmony with the universe. Sometimes people call to this being and it comes as male, or female, or both. To me its a real being that has a pretty “universal” energy

According to the Dark Tradition of the Order of Nine Angles, Baphomet is a sinister acausal entity, and is depicted as a beautiful, mature, women, naked from the waist up, who holds in Her hand t…

According to what I learned in this Forum, Pan is an ego of Lucifer.

Baphomet is nergal. Skip the Jewish hoops to jump through 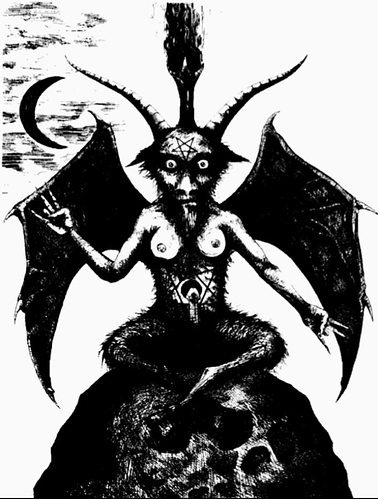