I’m going to be using the thoth layout for this tarot reading. Before I start the reading I’m going to be invoking a host of divinatory spirits. May they guide my hands to the “truth”. The question I will be asking is who am I. What will stand out the most during the reading will most likely be trump cards. I’m going to guess the some of the cards now to see how it matches up with after the reading. I believe a card I will get if definitely the knight of swords, the hermit, and perhaps a few wands cards. Now that i’ve made my predictions I am going to let the spirits guide my hands… Disclaimer this reading is not an all encompassing read of who I am and should be taken as a possibility or a part of me. 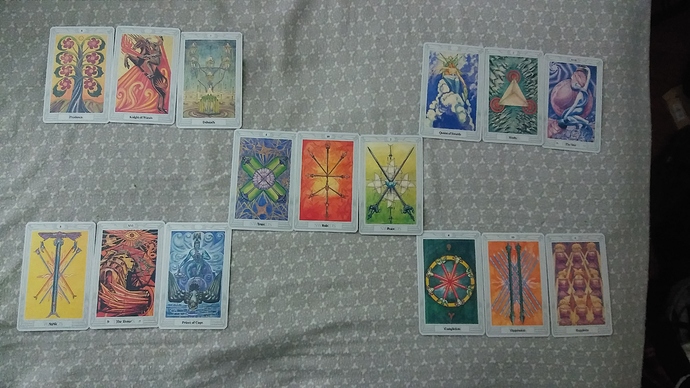 So how the Thoth layout works is… The center card is the core of the reading. The other cards adjacent to ruin are in support or conjunction with it. The cards to the upper right are the inherent future. The cards to the upper left are a different possibility for who i am/will be. The bottom left is my psychology. The bottom right are karmic laws or destiny that has shaped me. Now I will explain what the cards mean to me
Something extremely interesting that I noticed was I picked up Ruin, Truce and Peace in that order. It’s a cycle. Part of my being is a cycle of war. From ruin comes a truce to make amends, from the amendment comes peace. Very interesting. Next I’ll cover what all the cards mean in order of the draw.

Alright now I’ll explain how exactly to read it.
Card 1 - The querent and the nature of the problem and primary influences. A court card in this position sometimes refers to a dominant individual or influence in the querent’s situation. In other words this is the motif of who I am.

Card 2 and 3 - in conjunction with Card 1, are the key cards describing the nature of the situation and personality of the querent.

Cards 6, 10 and 14 assist the querent in making whatever decision may be necessary. They indicate the psychological basis and implications of the issue.

Cards 7, 11 and 15 show forces operating beyond the queerents control - destiny or karma - to which the querent can adapt. in this sense they constitute advice as well.

Now for my interpretation of the cards. At my core I have a tendency to be ruin this ruin may not always be bad… It often leads to dissolution of old thinking and delusions in the self and possible others… Next is 4 of swords which is truce. Truce compliments the aspect of duality that is seen throughout the cards. I am the driving force of ruin and conflict but also the maker of peace and truce. I cause chaos and then settle chaos. As we can see the meaning of the Queen of swords goes along with the sly nature of the seven of cups meaning the interpretation will be from top left to top right.
Based on the cards 1, 2, 3, 5, 9, 13, 4, 8, 12 my personality of who I am/who i will be in the future is someone who is… Cunning deceitful, clever, sly, good with material affairs, business-like, swift minded, greedy, the want to overthrow preconceived ideas, generous and prideful. It seems like my nature reminds me of a fox. I am not completely full of wrath and manipulation as the knight of wands card suggests, if I am crossed I will wreak havoc however.
The psychological factors that play into who i am are… Strife conflict and war. Destroying old ways of thinking and bringing about “light”. As well as lastly the prince of cups which is he who is similar to the fox like state of being. The other cards are karma or hard to change unseen forces influencing who I am.
Very interesting read! Those who know me or have briefly talked to me are welcome to comment on this post and see if the cards match up to what you’ve seen so far. @KingOfHearts616

From what I’ve seen, pretty accurate. Some of the card meanings I sent seem to be closer

so, can you do this basic reading for others? Or is this something that must be done by yourself?

I am trying to figure out not only who the fuck I am…but what I was, or rather was not. Incarnation…or whatever you wish to call it. Aura…calling…

Anything would be awesome…or more tips on your own technique so that I can do it for myself as a beginner. I have The Rider Tarot deck and The Cosmic Tarot deck…

Okay…I will try myself. Thank you. I need to learn anyways regardless…make time for my beauties (my cards)

Correct, that rule is there for very good reasons so I must request you stay with it, 3 months isn’t forever and I will post the link here so people can see all the information:

For the benefit of our members, we’ve updated the Rules regarding the offering of free readings on these forums. ★ Free Readings: ★ Free readings exist as a way for active members at all levels of experience, from novice to pro, to practise and receive feedback on their divination skills, and as a service offered in good faith to other forum members. We now prohibit people from offering this service unless they’ve been reasonably active on the forums for at least 3 months, participating in th…

Mkay… so I can’t name drop and do a reading on anyone? Or is it just reading for others?

so I can’t name drop and do a reading on anyone?

What do you mean by that, I don’t follow?

If someone asks me for a reading I can’t do it. But if you Pmed me asking for a reading could i do it? If you didn’t ask could I just drop a reading in the forum

The basic principle is no free readings on or for or about members until you have been here 3 months.

I don;t understand what you mean by

But if you Pmed me asking for a reading could i do it? If you didn’t ask could I just drop a reading in the forum

Doing readings on people without permission is a whole other thing, kind of edging into harassment.

But for the rest, itls there for good reasons, it’s been brought in after much deliberation and only because of previous problems that occurred often enough to necessitate a rule, and 3 months is not that long.

okay, my bad. So no reading for others on the forums at all (until 90 days) gotcha. Thanks for clarification

We now prohibit people from offering this service unless they’ve been reasonably active on the forums for at least 3 months, participating in the community as a genuine member.

I read rules and then they go right out the fucking window----then I am reminded of them…like shit.

totally get…normally not the sorry type, but having respect for the craft is different.

The norm…nope. Don’t give a fuck about.

take me to the dark side and all lmao

Oh hush I’m not that old