What is the sigil of Moloch?

Moloch as in malk(kings) or lizards?? 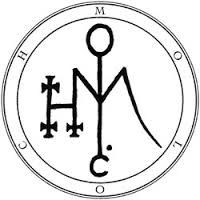 This one seems pretty popular.

what does Moloch do? I keep hearing about him, but never about what he does.

At times before Moses all semitic folcs were pagan and basically were using different variations of aramic. So all root of all words are same(so today) - After Moses israelites became monotheistic while all the rest of nations around stayed pagan till Mohammad. Howevers some of folcs worshiped Moloch. The word by itself is 3 letters: MLH - thats the root which all semitic nations were using - that’s all and israelites called him “Malcam” - wich means “their king”. By the way, Mohammad by himself was from tribe of Moloch, but that’s not the point. This creature is a demon and like most of creatures of that category he feeds with suffering, actually with energy that produced by it. So he told to his worsipers how to build exactly devices were he could feed himself - those were children were burned. So that was very important to burn them alive. Another side of story is that all this theatre had very seriouse reason: suffer that prodused here is not enough to feed such creatures, but suffer that soul produces in hell is uncompareble to its earth analog - and that’s where all his worshipers were going, becuase creature named “Molch” having a dobtfull plasure being so called Lord of magma(one of them). The name by itself is more like a nickname and if you REALY wana call him - just make huge masacre, better with fire, but don’t forget about consequenses

From wich grimoire is it? 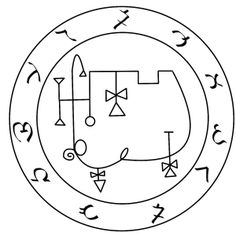 I used divination tii ok ask Moloch himself, he does not like the popular “m” sigil

I used divination tii ok ask Moloch himself, he does not like the popular “m” sigil

Is this a personal channelled sigil

There usually isn’t one sigil for spirits , but several .

It Is better to open sigils who are recognised by some of the elite LHP practitioners Kerval, Jehannum, Asenath, Bill Duvendack to name a few